Experts say a refundable tax credit system is expensive but it works. Why do provinces always seek to slash them? 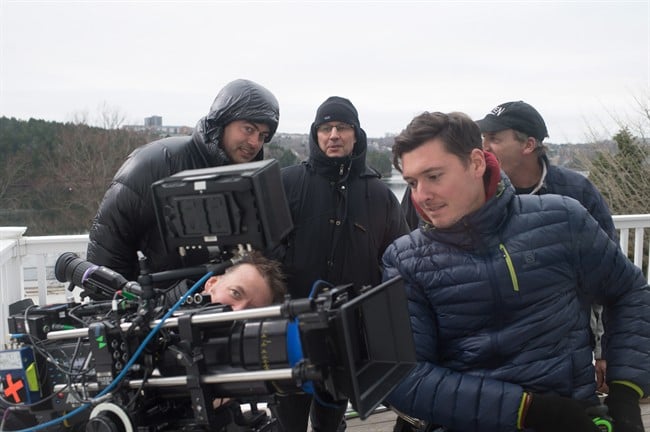 Halifax-based camera operator Andrew Stretch, right in blue jacket, and other crew on the set of Haven, a supernatural drama filmed in Nova Scotia. (HO-Michael Tompkins)

HALIFAX – Camera operator Andrew Stretch remembers the day in 2013 when a campaigning politician looked into his camera lens and promised to help create jobs that would allow more young people to stay and work in Nova Scotia.

The politician was Stephen McNeil, now the province’s premier.

Stretch says McNeil broke his word last week when he tabled a budget measure that effectively kills a tax credit that most other provinces are still offering the film and TV industry.

“I used the skills I learned working in the film industry to help you spread your word,” Stretch says in an open letter released Friday, a day after the province cut by 75 per cent a refundable tax credit that production companies have used for 20 years to finance their work.

“I continue to work as a professional in the film industry and as you’re aware, your government is on the verge of threatening my livelihood as well as that of thousands of close friends — hard-working, taxpaying and, for the most part, young Nova Scotians.”

Stretch, who works in Halifax on the supernatural drama series “Haven,” says he studied film in England but chose to return home to Nova Scotia 12 years ago to be close to his family and take advantage of what has become a burgeoning film industry.

The government says its analysis of the program shows the value of production associated with the credit amounted to only $66.8 million in 2013-14, generating $39.4 million in salaries and wages.

The existing refundable tax credit offers producers a basic rebate on 50 per cent of qualifying labour costs. Productions shot outside of the Halifax area can get an additional 10 per cent off, and another five per cent is available for a third film shot in Nova Scotia over a two-year period.

The potential 65 per cent rebate is one of the highest in Canada, but it isn’t unusual. Every other province except P.E.I., Saskatchewan and Alberta offer some form of refundable tax credit and bonuses to entice TV and film producers.

But the premier says Nova Scotia’s offering is too rich for a province struggling to balance its books.

“I understand why people affected by the change are not happy,” he said Friday. “We don’t have the capacity to write a blank cheque.”

The government says that for every dollar it spends on the tax credit, it receives less than 25 cents in taxes.

Under the new rules, 75 per cent of the refundable tax credit will been transformed into a regular tax credit, which means it can only be applied against taxable income.

Marc Almon, chairman of Screen Nova Scotia, says this approach will make it impossible for producers to secure financing.

“That means we’re no longer competitive with any jurisdiction in North America,” he said in an interview. “It provided the bedrock of your financing. Now the bedrock is gone.”

When Saskatchewan dropped its refundable tax credit in 2012, the industry shrivelled to nothing, Almon says, citing an October 2012 report that says the province’s Chamber of Commerce concluded that the decision to cut the credit was based on flawed data.

Almon says it also makes no sense to cut Nova Scotia’s credit now that the slumping value of the Canadian dollar is attracting more American productions to Canada.

Stephen Selznick, a Toronto-based lawyer who acts as a consultant for film and TV producers, says the refundable tax credit system, which includes a federal component, is expensive but it works.

“There’s a great deal of competition among the provinces,” he says. “But this is a huge drain on the tax system — good incentive or otherwise — when governments are trying to balance budgets.”

Ontario and Quebec have both come forward with proposals to scale back their assistance. Ontario has already put new restrictions on its digital media tax credit, and a committee in Quebec has recommended phasing out the Quebec Production Services Tax Credit.

“Even though it has an economic benefit far in excess of what the credit is, it’s an embarrassment to write a cheque to a big American studio for $20 million,” says Selznick.

“If (governments) want to show that everybody has to suffer a little bit in balancing the budget, this is a good place to take a grab.”