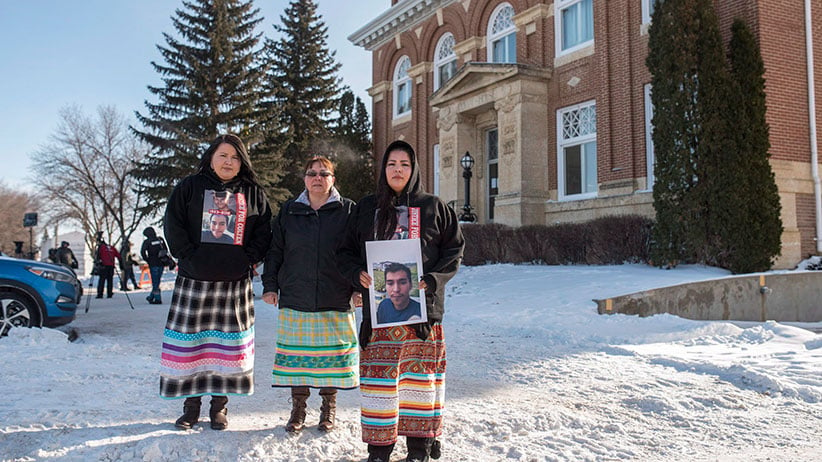 Krissa Baptiste, right, holds a picture of her cousin of Colten Boushie, as she leaves during a lunch recess on the day of closing arguments in the trial of Gerald Stanley on Thursday, Feb. 8, 2018. (THE CANADIAN PRESS/Liam Richards)

Colten Boushie’s mother stood up and screamed when the verdict was read. Her family wailed in grief and anger and outside the courtroom members of the Red Pheasant First Nation denounced the injustice. Their boy was in a grave, and the man who put him there was walking free.

The outlines of the tragedy are stark. A group of friends out for a drive got a flat tire and went to a nearby farmhouse for help. There was an argument with the landowner, who pulled out a handgun and shot Boushie in the head, killing him instantly. Incredibly, a jury that included no Indigenous members found the defendant, Gerald Stanley, not guilty.

The details of the tragedy are far more ambiguous. Boushie and his friends had been drinking and had earlier used a rifle to try and steal a vehicle from another farm. They entered the Stanley property, one of them tried to start an ATV and their vehicle crashed into one of Stanley’s cars. As Stanley’s own son faced down the intruders, Stanley went to get an old handgun. He fired two warning shots in the air, removed the clip to unload the weapon, then reached into the SUV to take the keys. There was still a bullet in the chamber, the gun went off. Boushie was dead.

Legal experts had warned that to prove Stanley was guilty of murder the Crown had to demonstrate beyond a reasonable doubt that he intended to kill Boushie—difficult given the warning shots, the fact he removed the clip and his attempt to take the keys. Even accidental manslaughter required evidence that Stanley’s actions were a “marked departure from what a reasonable person would do in the circumstances”. This was never a rock solid case for the prosecution.

Regardless, for both those paying attention and those who are just hearing about the case now, the verdict is still shocking and unexpected. And it will spark protests across the country as Indigenous Canadians and those who support them demand justice. There will be intense debates in print and on the air. Legal experts will explain Canadian criminal law in detail, the jury system, and the extent to which someone can or cannot use a gun to protect their property. There will likely even be several firearms experts explaining how old ammunition can misfire.

The politicians have already jumped in. Prime Minister Justin Trudeau, in the midst of a trip to California, immediately expressed his support for the Boushie family, as did the Justice Minister. And the two Ministers responsible for Indigenous issues both called for more justice. Given that this case is likely to be appealed, this political rush to criticize the verdict seems imprudent at the very least. And, in light of the ongoing state of Canada’s First Nations, Inuit and Metis, the sudden indignation might even be called cynical.

I want to give Trudeau and his government the benefit of the doubt on this. Anyone who has seen the pain on the faces of the Boushie family should be moved and upset at this tragedy. The natural reaction of any human with a heart is to reach out and try to provide some comfort, any comfort, for their loss. I have no reason to doubt the individual sincerity of the politicians who are weighing in.

But, this is not the first loss. This small, sad drama that unfolded on a farm outside of Battleford is only one of thousands that take place all the time in this country. Every day, there are young Indigenous men who endure lives of unseen tragedy. They grow up in an abusive home. They drop out of an indifferent school. They join a criminal gang. They become addicted. They are arrested and face trial without adequate defence. They are given sentences far longer than normal. They are tortured in solitary for days, months, years. They emerge even more broken.

And Canadian society, instead of treating this as a national emergency, retreats into racism and stereotypes. My great grandfather homesteaded not far from where Boushie died. I know the people in that area. I have no doubt that they genuinely fear the crime and chaos of the nearby reserves. They are frightened at the rise in violent crimes; they feel alone, believing budget cuts have prevented the RCMP from protecting them and their families. In these circumstances, the jury agreed that Stanley’s decision to fear a group of drunk young men and to defend his son and wife with a gun was “reasonable”.

At the time, when they were created, the reserves seemed like a reasonable idea; so did the residential schools. The sentencing guidelines that have ensured Indigenous Canadians are six times more likely to be imprisoned than the national average once seemed reasonable. Budget decisions taken in Ottawa by this government and the ones before it were all once accepted as reasonable, even if it meant a child on a reserve received less money than one in a city. Health care policies have all been reasonable, even though we are now facing rates of HIV in some Indigenous communities that rival Africa countries.

This trial. This country. This mess. We got to this place after a series of reasonable choices. Eventually, we will decide we need to do better. Eventually, we will have a leader who understands we have to, someone who recognizes that a country with all of Canada’s blessings cannot leave hundreds of thousands of its citizens to rot in poverty and neglect.

So far, Trudeau is not that leader. His responses have all been reasonable. He has shuffled his cabinet. He has made some promises. He has posed with elders and sent his love by Twitter. But, that is not enough. It is what his predecessors did, all reasonable politicians. What the Boushies, and the rest of Canada, need is an unreasonable leader, one who is willing to spend the money and take the hard decisions needed to finally end this national tragedy. Sadly, I have little hope we will find that leader among us any time soon.