Where Canada is falling short on its coronavirus communications

Some key lessons identified after SARS have not been followed, leading at times to sparse details and a patchwork system of basic information 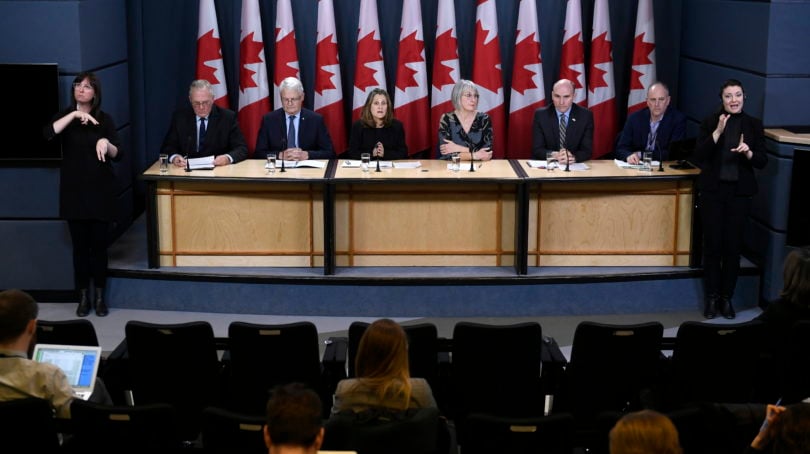 Cabinet ministers participate in a press conference on COVID-19 at the National Press Theatre in Ottawa, on March 16, 2020 (CP/Justin Tang)

Lecterns and podiums have become well-worn as the spread of COVID-19 has raged worldwide. Populations have been anxious, markets have been spooked. Entire countries have virtually shut down. Through it all, leaders have been out front even more than normal. Politicians have made extraordinary addresses, imploring their citizens to stay inside.

Both President Donald Trump and Prime Minister Justin Trudeau have begun holding daily press conferences to update journalists—although Trudeau has done them with some distance, as he is in self-isolation at Rideau Cottage. Deputy Prime Minister Chrystia Freeland, meanwhile, has headed up a team of ministers and senior health officials to brief the public on actions Ottawa is taking to curb the spread of the virus.

Trump initially used his bully pulpit to downplay the severity of COVID-19, leading to fears that his supporters would ignore advice to stay inside. While he has since begun to acknowledge the severity of the novel coronavirus, he has now chosen to start calling it by the racist moniker “China flu.”

Closer to home, Ontario Premier Doug Ford caught flack for telling families last week that they shouldn’t cancel their March Break plans: “Go away, have a good time, enjoy yourself,” he said in a press conference, directly contradicting advice from experts. Uniformity in messaging has been tough, too—the premiers of Quebec and British Columbia have used their press conferences to needle Ottawa to take more drastic action to limit travel.

In Ottawa, press conferences often start late. Announcements have sometimes lacked clarity—when Trudeau announced, Wednesday, that the U.S. border would close to non-essential travel, it was hours before it was revealed that there was no firm timeframe on when that would happen. When the federal government announced sweeping border closures on Monday, pertinent details of the plan weren’t released until hours later.

Canada has already gone through a pandemic response. A report commissioned by the federal government after SARS found that its “communication to the public was sometimes inconsistent, and it was not always clear who was in charge of the outbreak response.” It also found that, at the time, there was no national database to track cases, and data sharing with the provinces and cities was dysfunctional.

Things have improved dramatically since 2003, especially given COVID-19 is orders of magnitude wider and more severe than SARS. But the response to this crisis has underscored that gaps remain.

At a press conference Wednesday, Deputy Prime Minister Chrystia Freeland admitted that “better is always possible,” but highlighted her government’s proactive media strategy—the daily press conferences, for example—as evidence that they are coordinated.

At the same time, Freeland tamped down the idea that Ottawa should take greater control of messaging and publishing data. “Canada is not a highly centralized country,” she said. “Quite the contrary.”

While messaging appears to be improving daily, its public reporting on the scope of the problem is slapdash. Canadians looking for pertinent details on new cases are confronted with a byzantine mess of a system.

The federal government releases aggregate statistics on new COVID-19 transmissions and suspected cases on its website, breaking them down by province, but doesn’t provide any greater detail, and often fails to update the information throughout the day. In contrast, Ontario publishes the age and location of some new cases, as well as how the person caught the virus; while British Columbia does not release that data. Ottawa reports the number of tests conducted out of a national lab in Winnipeg, currently sitting around 1,000; but does not report data from the provinces, who have conducted more than 50,000.

It makes for a patchwork system of basic information on the state of the crisis.

Other countries show how useful it can be to get it right. South Korea has set up a dashboard to let reporters, researchers, and the public visualize data on new transmissions and tests. Germany issues daily reports with granular data, including on when the onset of symptoms began. Singapore lists every single new confirmed case of COVID-19 in the country, including where they likely caught the virus and on which dates. There is really only upsides to publishing that sort of information.

While that data won’t be made public, Canada’s Chief Public Health Officer, Dr. Theresa Tam, confirmed that, at least, it is being collected, meaning Ottawa can share that information with the World Health Organization and others. “That is absolutely happening,” she said. Tam says she has been getting calls in the middle of the night from her provincial counterparts to report new cases. “Do we need more detailed data in order to look at in depth research? Yes,” Tam said, though she said that sort of data is more useful for researchers and scientists.

There is a lot to appreciate about this government’s team-based approach. There have been missteps already, but the urgent need to get things right has seemed to implore the government to stop them from happening twice.

Hajdu underscored just how enormous of a challenge COVID-19 has been, likening the initial outbreak in Hubei province to an earthquake—Canada is only now dealing with the tsunamis created by it.  “We have been working very hard to respond to each new area and crisis that this virus presents.”

Hajdu says that for all the scenario planning the government has done, preparing is enormously difficult: “It affects things that we can’t even anticipate it will affect.”

But that’s exactly what pandemic response needs to be—being so prepared, so proactive and so transparent that by the time a crisis hits, you’ve covered every base imaginable.