Plus, find out who takes the safest title away from Caledon, Ont.

For the third year in a row, Prince George, B.C., leads Maclean’s annual crime ranking. Still, the news is not all bad for that city–its crime score was down from last year, when it was 114 per cent above the national average. As well, Canada’s national crime score is more than 25 per cent lower than it was a decade ago. On the flip side, Caledon, Ont., lost its crown as the safest city, a title held since the rankings began in 2008. Two murders within the area patrolled by its police force put its homicide rate 73 per cent above the national average. Nearby Wellington County took the safest title.

The rankings are based on analysis of Statistics Canada’s Crime Severity Index for the nation’s 100 largest cities and regions, along with municipal crime data for six offences: homicide, sexual assault, aggravated assault, robbery, breaking and entering, and auto theft. (The data, from 2011, is the most current comparable data on a cross-country scale. (Have a look at the full crime rankings, methodology and interactive tools here.) 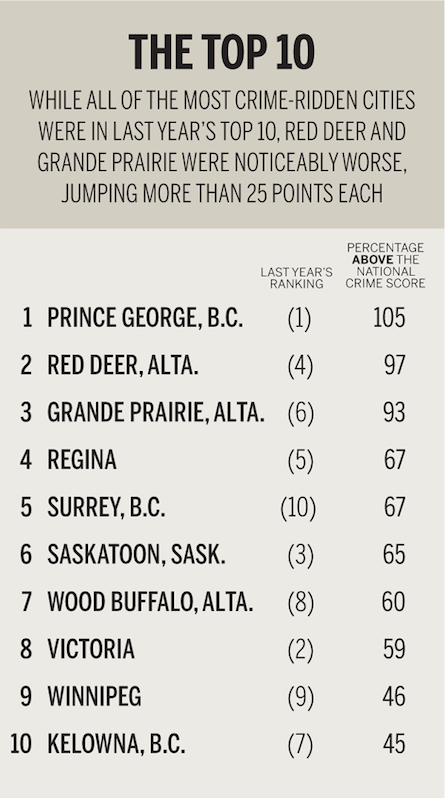 Click here for the most dangerous cities in Canada in 2016.

At their core, annual crime statistics are a snapshot of the year that was. The first year Maclean’s compiled its national crime rankings, Arthabaska, Que., was the murder capital, with a homicide rate 302 per cent above that of Canada as a whole. Yet in 2009, the region of 70,000 witnessed no murders. Last year, its two homicides put it 77 per cent above the national rate.

For all the annual variations, some cities are repeat offenders. Year after year, https://grademiners.com/ western cities dominate the rankings as the worst for crime. And, in reverse, the most populous cities in Ontario and Quebec consistently score well. Toronto’s overall crime score ranking is No. 52, exactly where it was in 2000. To see how well your community or province did in 2010, go to our interactive chart for a complete listing. Our interactive map of Canada’s safest and most dangerous cities allows you to quickly zoom in and see how cities stack up against one another. You can also click on assignment writer the buttons below to see the rankings for each of the six criminal offenses included in the overall rankings.

The good news
Yes, there’s been an overall decline in crime levels in Canada—but some areas stand out as especially safe

Methodology: Maclean’s obtained annual crime data from Statistics Canada for municipal case study writers police services serving the nation’s 100 largest populations, each encompassing a city or town of at least 10,000 people. Using 2010 rates per 100,000 people for six crimes—homicide, sexual assault, aggravated assault, vehicle theft, robbery plus breaking and entering—Maclean’s calculated the percentage difference from the national rate. The overall crime score ranking for the 100 communities was created in consultation with StatsCan, using its Crime Severity Index (CSI) score and calculating the percentage difference from the national score. Maclean’s calculated the ratios by dividing population of the area by the raw number of crimes.