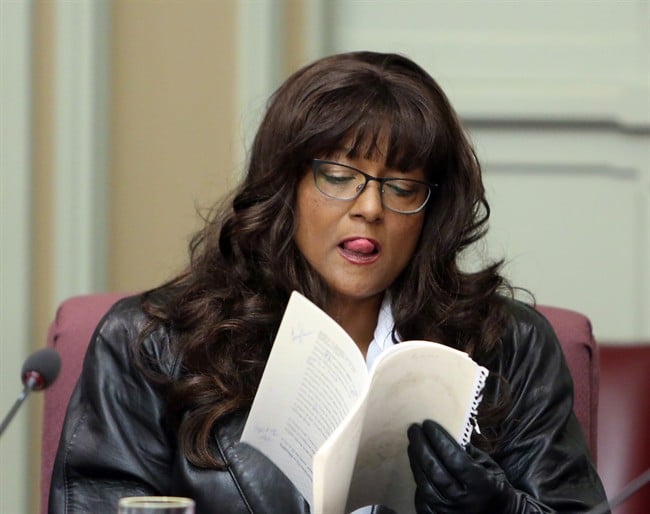 OTTAWA – The controversial, leather-clad woman at the heart of the effort to rewrite Canada’s prostitution laws delivered an unexpected whip-crack of drama Wednesday among the buttoned-down senators examining Bill C-36.

Bedford was one of three sex workers who successfully challenged the original law before the Supreme Court on the grounds that it violated their Charter right to security of the person.

The high court gave the government a year to come up with an alternative.

That alternative is Bill C-36, which treats prostitutes as victims, seeking to protect them from almost all criminal prosecution except in circumstances where they are selling sex near a daycare, playground or school.

The bill instead targets pimps and johns, as well as other who profit or trade in sex on an exploitative basis.

Supporters of the bill agree with that narrative, arguing that those in the sex trade are forced into it by systematic issues of poverty, racism and sexism and deserve protection from the law.

And they agree that going after those who are the instigators of the sex trade is a way to better protect those women.

Bedford, however, is not among them — and she made that abundantly clear Wednesday.

It’s not the purview of the government to tell women when or how they can or cannot sell sex, she argued, riding crop in hand, as she threatened to expose politicians who supposedly avail themselves of the world’s oldest profession.

“If this law passes I’m going to make you guys forget about Mike Duffy, because I’ve got more information and more proof on politicians in this country than you can shake a stick at, I promise,” she said.

When asked by Liberal Sen. Serge Joyal how the new law might affect her work, Bedford appeared to opt for a show of force.

She whacked the desk with her riding crop and said the new law would ensure she was back before government in 10 years, arguing the issue anew.

It’s a point of view echoed by other opponents of the bill, who say that as written, C-36 does little other than create greater dangers for women.

Provisions in the bill against advertising sexual services and any element of criminalization of the sex trade will further push women down back alleys, they argue.

Throughout committee hearings by both the House of Commons and the Senate, some have complained that the concerns of those opposed to the bill have received short shrift compared to those who support it.

Bedford said as much Wednesday as she tried to describe how much the court challenge has cost her personally. At one point, with her allotted time running down, Runciman tried to remind her that she needed to wrap up.

“You have given lots of other people lots of time,” she complained.

“I have 30 years of your abusive laws, so I should be allowed at least an extra five minutes to talk about it. You pet everybody else on the back but when you know I’ve got a bombshell to deliver, you want to try and avoid me at all costs.”

Runciman asked Bedford to respect the rules of the committee, saying if she didn’t, he’d suspend the meeting and have her escorted out. Bedford pressed on, so Runciman banged the gavel to end the hearing. Bedford was escorted out by security.

Later, speaking to reporters outside, she said the government feels threatened by the demise of the old law, which she said was “custom-designed to hurt, maim and kill women who don’t want to have sex for free.”

“They want to do it again and they want to make matters worse. So, yes — they are on the attack against strong, independent women who can think for themselves.”

Bedford later issued a statement apologizing for her behaviour.

“I was barely able to read my speech because I was so angry at the government for parading victims with repeated irrelevant information and then organizations who were shilling for government handouts on which they are dependent,” the statement said.

“I have already been told that people are sympathetic to the points I made and even to my outburst. They seemed to agree that the government can’t handle the truth. They have repeatedly shown disrespect for various institutions, processes and persons. The truth will win out.”

The incident was the latest in a series of emotional days before both the Senate and the Commons committee studying the bill.

The issue has show a deep divide among advocates in the sex trade about whether it is work taken on by choice or by circumstance and what the role of the government ought to be in either situation.

France Mahon, who was a law student working with Bedford at the time of the case but is now a lawyer, urged the Senate to see it as an issue of workers’ rights, not women’s rights.

The debate is about the human rights of women facing extreme desperation, Megan Walker, the executive director of the London Abused Women’s centre, said during earlier testimony.

“Human rights are not granted exclusively to those who have the loudest voice in the room.”

A third and final day of hearings is scheduled for Thursday.