Canada's most inconvenient bookstore is a 'treasure' on the Prairies

Tucked away off the highway in Perdue, Sask. (pop. 300), Crawford’s Used Books doesn't have a website—but it holds twice the number of volumes as the main library in Guelph, Ont. 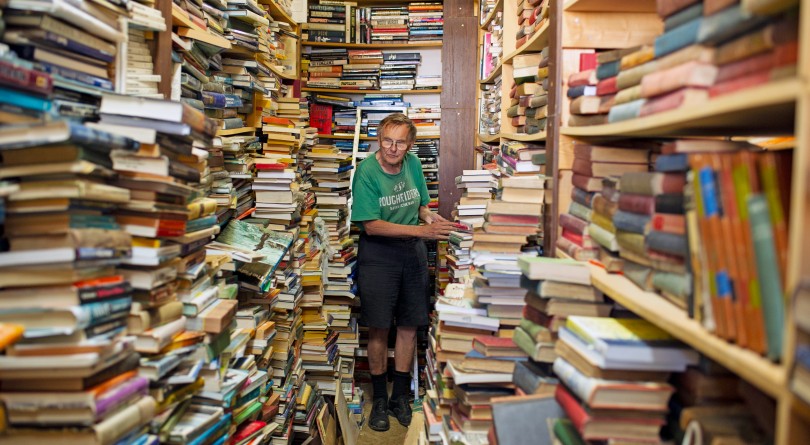 Crawford works his way through his book shop in Perdue, Sask.(Photograph by Mark Taylor)

Crawford’s Used Books doesn’t have a website. It’s closed from November to April. And it’s always shuttered on Sundays.

Notionally, the store is open six days a week, a little more than half the year, but it’s still probably best to call Ralph Crawford to make sure he’ll be in before making the trip. The 73-year-old is the shop’s lone employee—and he doesn’t use email.

Tucked away in Perdue, Sask. (pop. 300), about 65 km west of Saskatoon, the bookstore isn’t within view of motorists driving by on the highway. Its only signage is one faded-out word—“books”—written on wooden window covers.

Inside, there’s no database of what reading material is in stock or what’s to come, even though it holds twice the number of volumes as the main library for Guelph, Ont. And there is no way to discern—aside from asking Crawford—where the sections are for, say, true crime or Canadiana. It’s just piles upon piles of books from floor to ceiling, some on shelves, some not. “I always tell people not to worry if a stack falls over because you see more books,” Crawford says.

READ MORE: These are the books you need to read in 2019

Also, don’t forget to bring cash or a chequebook, since the bookstore doesn’t accept debit or credit.

By almost every measure, Crawford’s Used Books is the most inconvenient bookstore in Canada—the antithesis, you could say, of Indigo’s gentriﬁed tidiness or Amazon’s online simplicity. It’s also “a little treasure on the Prairies,” says Ray Sadler, an avid reader and mayor of the neighbouring town of Biggar.

Crawford ﬁrst rolled into Perdue in 2004. He previously ran a bookstore in Shefﬁeld, N.B., for more than 30 years. But when he found out a new four-lane highway would bypass his shop, Crawford ﬁgured his tourist trafﬁc would dry up, so he started to look for real estate out west.

A friend had recently moved to Harris, Sask., 40 km south of Perdue, so Crawford contacted the same real estate agent and found a building that had been a Merchant’s Bank before the Bank of Montreal took it over. That was long ago. By the time Crawford bought it, the building had housed a doctor’s ofﬁce and, for a while, some residents.

It was rundown but big, which was good, because Crawford needed space. His journey from New Brunswick had been a cavalcade of three semi-trailers, one church bus and a couple of three-tonne trucks, each bearing a portion of his massive collection. “When Ralph ﬁrst arrived,” recalls Merle Massie, a farmer and Western Canadian historian who lives in Biggar, “he kept bringing in books from his storage outside.” It took him a full year to get all his books into the store before it could properly open.

Once it did, Massie was drawn by a collection of cookbooks containing recipes curated by Maritime church groups, which yielded wonderful seafood dishes she’d never seen in the Prairies—a vestige of the store’s East Coast roots. Massie has since become a regular customer, bringing in books of her own to trade, learning to navigate the stacks by turning sideways so she can ﬁt down the narrowest aisles. “The feeling you get when you enter is a strange combination of being overwhelmed and delighted,” Massie says. “It feels more like a treasure chest than a bookstore.”

Crawford has become a local treasure of sorts, too. “He goes to church every Sunday and volunteers,” says Sadler. “He sits on the housing board. He runs a book program for children. The seniors love him—he’s a senior himself. He put himself right into the community and people have taken him in.”

When Sadler ﬁrst came upon the store, he was the kind of collector in search of books with autographs. And he found some success, with signatures from the likes of Pierre Berton and John Diefenbaker. “Book collectors [coming to the store] were hoping to ﬁnd a signed Hemingway,” Sadler remembers.

If a signed Hemingway exists among these stacks, its discoverer will have to sort through roughly 300,000 volumes to ﬁnd it, according to Crawford—a ﬁgure that seems plausible to anyone standing inside, but hard to conﬁrm in one visit. Who can tell what 300,000 books looks like when they’re all in a bunch of piles?

Military history is one stack, world history another. The travel section is by the window, older ﬁction down one of the cluttered aisles. At one end of the shop are the classics, including plays and poetry. There is a wall of paperbacks. Crawford will happily climb his ladder to show off the marine and gardening sections. Further down the stacks is a mixture of psychology and self-help.

During an hour-long tour, the only title with two copies in stock is Common Ground by Justin Trudeau, which lies on the floor. “If you want a good doorstop,” Crawford jokes.

He has a pretty good memory of what he’s got in stock, but even he sometimes makes discoveries in his own stash. “I recently came across an interesting book called Rapid Transit Abroad,” he says. “That sounds like a 20th-century book, but it was published in New York in 1879.” It takes him 30 seconds to ﬁnd it hidden in the stack. He’s pencilled in the price as $200, adding he got to that ﬁgure after ﬁnding a copy of the book online selling for US$200.

Business has been quieter lately, Crawford admits. It could be that too many local shops are shuttering, leaving fewer folks reasons to travel to Perdue. Or maybe people are getting too accustomed to shopping in Saskatoon, he suggests. One thing he knows is people aren’t giving up on books. The question is whether his bookstore is worth the trip.