Chief public health officer, retiring on Friday, was to stay in position until 2019 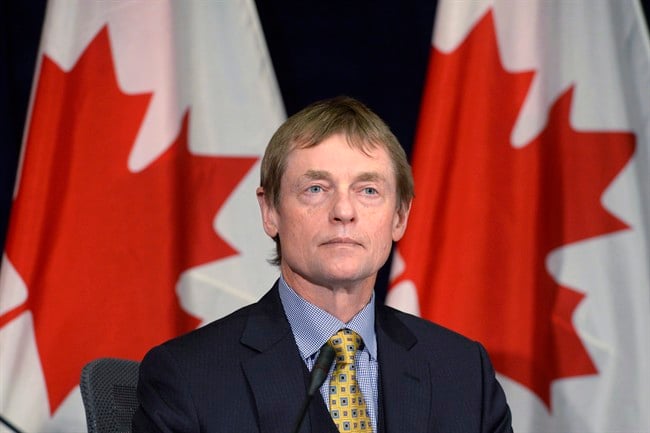 Dr. Gregory Taylor, Chief Public Health Officer of Canada, speaks during a news conference in Ottawa on Friday, Jan. 29, 2016 about the Zika virus. After a little more than two years in the job, Taylor is retiring as the country’s top doctor, three years ahead of schedule. THE CANADIAN PRESS/Adrian Wyld

TORONTO – Dr. Gregory Taylor is retiring as Canada’s chief public health officer after a little more than two years on the job.

Taylor, 61, told The Canadian Press his last day as the country’s top doctor will be Friday, and the search is now on for his replacement.

The former family doctor took over the position in September 2014, succeeding Dr. David Butler-Jones, the first head of the Public Health Agency of Canada (PHAC), which was created in 2004 in response to the SARS crisis.

Butler-Jones was Canada’s top physician for almost a decade and left the position in 2013 after suffering a stroke a year earlier. Taylor had previously been Butler-Jones’s deputy, but was acting chief until he officially took over the role.

The position normally lasts five years, but Taylor denied there was any conflict over government policies that prompted him to leave before that tenure was up.

“Absolutely not,” he said Tuesday from Ottawa, adding that he’s been honoured to work with two prime ministers, Justin Trudeau and Stephen Harper, and their governments, and to be responsible for the overall health of Canadians.

“When I applied, I told the selection committee that I would do two years,” Taylor explained. “But I had really been doing the job for about four years.”

His retirement plans include hiking, skiing and travelling with his wife “while I still have my health,” said Taylor. “So I feel probably in the next 10 to 15 years, I need to get out there and do those things while I can.”

The chief public health officer is responsible for providing leadership to PHAC and advice to the federal minister of health, while looking out for the health of all Canadians.

During his tenure, he was involved with international efforts to halt the Ebola outbreak in West Africa — PHAC’s National Microbiology Lab in Winnipeg has been at the forefront of research into a treatment and vaccine for the deadly disease — and to deal with the Zika pandemic, providing advice to Canadians on how to avoid exposure when travelling to southern climes.

Taylor, who will deliver his final report as chief public health officer on Thursday, said part of his rationale for retiring is he believes the position needs to be filled by someone a bit younger, with more energy and drive.

“It’s a challenging job, no question about it, but it’s extremely rewarding,” he said. “It’s such a privilege to be able to contribute to the health of an entire country.”