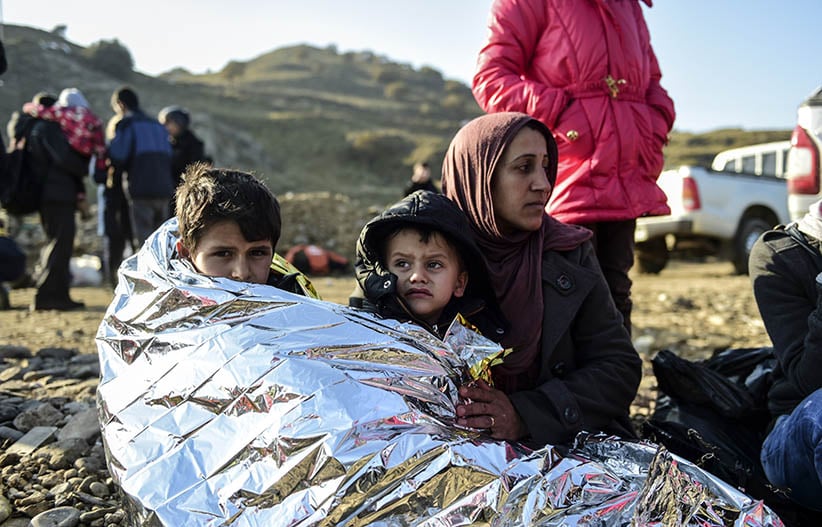 A Syrian family waits after arriving on the Greek island of Lesbos along with other migrants and refugees, on November 17, 2015, after crossing the Aegean Sea from Turkey. (BULENT KILIC/AFP/Getty Images)

We imagine them landing on a level playing field, blessed with equal measures of opportunity as they touch down in our land of plenty.

But thousands of Syrian families coming to Canada this winter will detect a discernible divide in the refugee experience, with newcomers sponsored by churches and community groups faring much better, on average, than those who rely on government assistance.

It’s a gap getting renewed attention, because the majority of the 15,000 Syrian refugees due to land in the new year will depend—at least initially—on federal financial support, along with the services of overburdened staff at settlement centres who will help them search out housing, health care and employment (fully 80 per cent of the 10,000 coming before Jan. 1, by contrast, will be sponsored).

Maclean’s Explains: What you need to know about the Liberal refugee plan

This despite the near instantaneous proliferation of grassroots groups hoping to lend a hand, whom refugee advocates say can ease the burden on government and refugees alike. “This is really a case of people taking newcomers under their wing,” says Peter Goodspeed, spokesman for Lifeline Syria, a Toronto-based organization that recruits and trains refugee sponsors. “They can make a huge difference in how quickly refugee families are able to adjust and succeed.”

Numbers tell the story. A 2012 study by Citizenship and Immigration Canada found that government-assisted refugees (GARs) are were twice as likely to be receiving welfare two years after landing than those with sponsorship. For instance, some 49 per cent of GARs who arrived in 2007 were getting social assistance, compared to 19 per cent of those allowed in under Ottawa’s sponsored refugee program. The study, which covered refugee cohorts over 15 years, also found that privately sponsored refugees were generally earning about 40 per cent more from work than their government-assisted counterparts.

The results reflect outcomes for the tens of thousands of the “boat people” who fled violence in war-torn Southeast Asia around 1980: on average, those with private sponsors found jobs four weeks earlier than those on government assistance, and were more likely to get work in their former occupations.

Related: Q&A with Mike Molloy, the Canadian who delivered the boat people

That’s not to suggest that those without sponsorship are an inferior class of immigrant, says Steven Meurrens, a Vancouver immigration lawyer who has looked into the issue. Many who get government assistance, he notes, are drawn from the most desperate, isolated and long-suffering candidates. “The UNHCR will usually try to settle the people who are most vulnerable,” Meurrens says.

By contrast, many privately sponsored refugees are identified by family members who have already come to Canada, and thus have social networks to fall back on when they arrive.

Still, the leg up provided by well-intentioned strangers is obvious. Some sponsors pay all or some of the newcomers’ travel expenses, whereas the feds provide GARs with loans they must pay back. Sponsored refugees can be out of reception centres within hours, hunting for accommodations with a friendly guide who knows the area, or for jobs with people who know who’s hiring. And no amount of money can buy the spiritual lift to be gained from a friendly face, or a sympathetic ear.

The experience can vary, of course, based on who’s doing the sponsoring. The federal immigration department maintains a roster of churches and community organizations pre-approved to receive refugees. In recent weeks, it has been feverishly adding to its list of ad-hoc groups willing to become so-called “G5” sponsors—groups of five or more private citizens who agree to provide the necessary support for a refugee or refugee family. They must commit, typically, to at least 12 months of assistance, and show they have the required funds, which for a family of four starts at $27,000. In certain cases, sponsors can remain involved with a family for as long as three years.

How much a group spends is up to them, but there’s a generally understood list of supports: meeting the refugees upon arrival; paying for food; providing clothing; finding interpreters; helping set up bank accounts; even to trying to find “people with similar interests”—that is, friends—can be part of the package. And the personal nature of a sponsor’s commitment brings added benefits. “If a child in the family is sick in the middle of the night, you’d want to know where to go,” says Goodspeed. “To have someone to call at those times is a real godsend.”

For that reason, Lifeline Syria and other groups were buoyed Tuesday by news that so many refugees coming before the end of the year would be sponsored. They’re now hoping the government will take a page from the early 1980s experience, when almost all the boat people arrived as GARs but Ottawa quickly swung open the door to private groups. It became one of the country’s shining moments, as nearly 60 per cent of the newcomers wound up with sponsors.

Though he’s abandoned his government’s ambitious deadlines, Immigration Minister John McCallum still seemed infused by that spirit this week. “This is not a federal project, or even a government project—it’s a national project,” he declared Tuesday at a press conference. If he’s true to his word, he’s surely considering how to get more sponsors in on the act. For everyone involved, it’s hard to see the downside.