Ambassador: Canada would come to table on NAFTA

Donald Trump had vowed to reshape the NAFTA free-trade agreement, threatening to pull out of it on the campaign trail 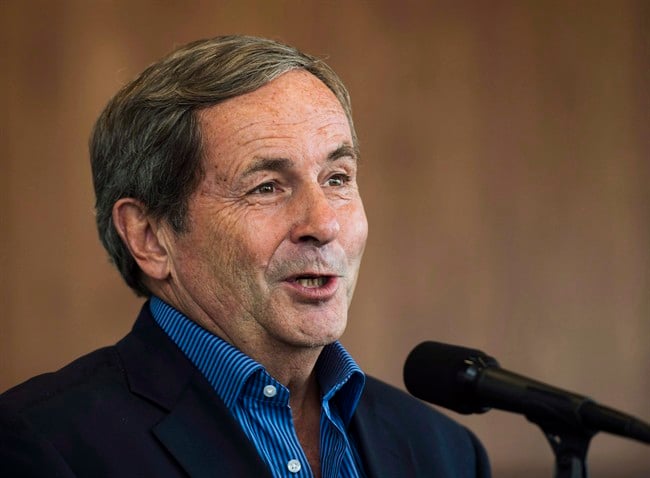 David MacNaughton. Canada’s ambassador to the United States, speaks to the media at the Liberal cabinet retreat in Sudbury, Ont., on Sunday, August 21, 2016. (Nathan Dennette/CP)

“We’re ready to come to the table,” David MacNaughton, the country’s ambassador to Washington, said Wednesday.

Canada believes the agreement as it stands has benefited all three countries, but “everything can be improved,” he told a conference call with journalists.

MacNaughton stopped short of disclosing details of what Canada would seek in an updated agreement, saying he’d prefer to save that for the discussion table.

He did say, however, that he’d appreciate seeing free trade in lumber — a perennial irritant.

OUR DEFINITIVE READ: The rise of Donald Trump

Upgrading the 1993 agreement was a major promise in Trump’s successful election campaign; Trump says if the U.S.’s neighbours don’t agree to renegotiate it, he’d move to scrap the deal — a move trade observers say could be quite complicated.

”NAFTA was the worst trade deal in history,” Trump said in a campaign speech.

”I’m going tell our NAFTA partners that I intend to immediately renegotiate the terms of that agreement to get a better deal for our workers. And I don’t mean just a little bit better — I mean a lot better.

“If they do not agree to a renegotiation, then I will submit notice under Article 2205 of the NAFTA agreement that America intends to withdraw from the deal.”

Observers say that a president could easily pull out of NAFTA, but that wouldn’t automatically restore trade tariffs — that would require congressional action, which would potentially be a contentious process.

Earlier in the day Wednesday, Prime Minister Justin Trudeau offered his congratulations to the U.S. president-elect, saying he’s willing to work with the new administration.

MacNaughton said he expects the two leaders to speak soon.