Stephen Harper may not want to quit his day job. But that doesn't mean he couldn't. 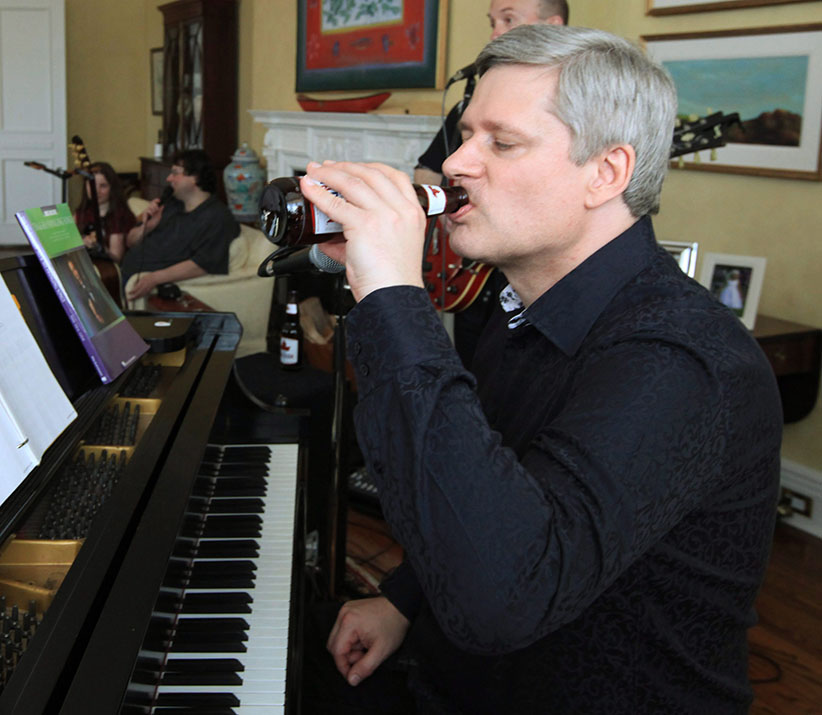 Though Stephen Harper has on several occasions made reference to his weakness for karaoke, during almost four years in office, he’d never approached a microphone in public to do much more than speak. And while he often cited his piano playing skills as evidence of a love of the arts, few had actually seen him tickle the ivories. All that changed on Saturday when the prime minister strutted out on stage during a gala at the National Arts Centre in Ottawa.

As he took his place at the piano and readied himself to play with world-renowned cellist Yo-Yo Ma, no one, it seems, knew quite what to expect. After all, immovably hairsprayed tresses aren’t generally the mark of a classic rock front man. But by the time he’d finished the first verse of the Beatles’s “With a Little Help from My Friends,” it became apparent that Harper’s got talent. “He had decent tone, a clean voice,” says Zack Werner, the mercurial Canadian Idol judge known for his brutal honesty. “More than anything, it was like watching a little boy with a really pure love of the song. His love for the piece of music was actually rather infectious.”

In the aftermath of what has turned out to be a rather brilliant public relations move, Werner is not the only expert commending the Prime Minister for his musical prowess.  Mike Daley, one of the musical directors for Classic Albums Live, called Harper’s performance “surprisingly good.” Daley should know—for the past six years, he has overseen Classic Albums’s “note for note, cut for cut” performances of Beatles records, including Sgt. Pepper’s Lonely Hearts Band Club. As with other songs John Lennon and Paul McCartney penned for drummer Ringo Starr, Daley says that “With a Little Help from My Friends,” the second track on the 1967 album, was written within a five-note range, making it one of their easier tunes to sing. Still, Harper handled all five of those notes “just about as well as Ringo,” he says. “We could probably use him in Classic Albums Live.”

Harper was no slouch in the frontman department either, says Larry LeBlanc, who ran the Canadian bureau of Billboard for nearly two decades and now writes for Celebrity Access. Though the song calls for only “basic chords” and the carrying of a relatively simple tune, “this isn’t just somebody who has done some karaoke,” Leblanc says. “This is somebody who is comfortable out on that stage.” Amateur musicians can often be distracted by the bright lights and “the music coming back through the monitor speakers,” LeBlanc says. But with Harper, “There’s no hesitancy. There’s absolutely no nervousness.” What’s more, it’s a confidence that appears to have been won after only a handful of practices. Phil Nolan, the percussionist for the Ottawa-based band Herringbone, which accompanied Harper, Yo-Yo Ma and the orchestra, told reporters that they had started rehearsing just a week before the NAC gala.

Harper was good, that much is sure. But was he too good? Though the experts agree it was Harper on vocals and keys, Dave Bidini, a founding member of The Rheostatics, wondered whether the performance was in fact pre-recorded. Bidini, says he knows “how difficult it is to sing, to have proper mic technique with a four-piece band, let alone a 17-piece orchestra.” But when Harper plays, says Bidini, “You can hear every word. Every note is in key. The fidelity of the performance seems remarkably, bizarrely good. It just raises my suspicion about whether it was live.” But according to PMO spokesman Dmitri Soudas, “The performance was live. Unequivocally.” Suggestions of trickery were also refuted by Carl Martin, a spokesman for NAC, who says that although Harper “did benefit from a rehearsal that morning […] there was no enhancement of any sort.” Says Martin, “I think we all discovered his talent at the same time.”

On his Facebook profile, the PM says he “won’t hesitate to lend a voice when warranted,” but concedes “politics was, by far, the better career choice.” Still, if Harper ever quits his day job, he might consider giving music a go. Werner says he “wouldn’t vote yes” if Harper auditioned for Canadian Idol, but suggests “He could do a nice little fundraising record. I bet there would be some people that would buy it.” Better still, says LeBlanc, Harper could put aside his partisan views and team up with the Liberals’ amateur pianist, foreign affairs critic Bob Rae. “Maybe there’s a duo here,” says Leblanc, “the Canadian version of Elton John and Billy Joel.”

FILED UNDER: Beatles NAC National Arts Centre Stephen Harper With a Little Help From My Friends