It took Ontario's John Beeden 209 days to make the crossing in his six-metre boat "Socks II." 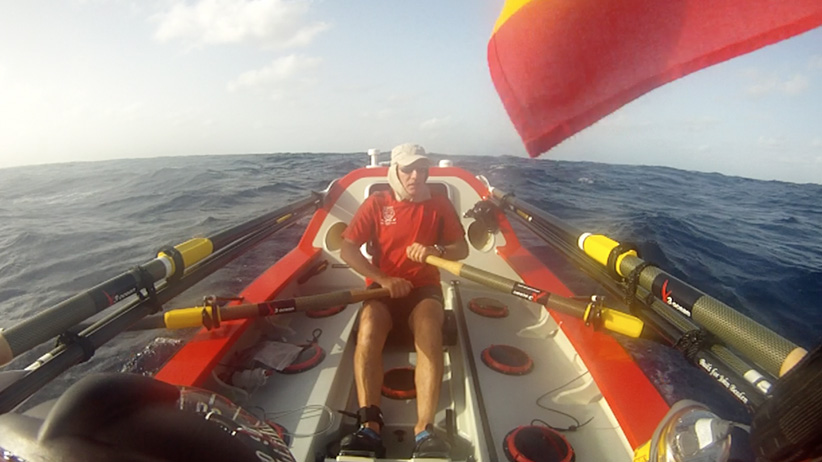 SYDNEY – A Canadian resident has finished an incredible journey — John Beeden has rowed by himself across the Pacific Ocean.

It took him 209 days to make the crossing in his six metre boat “Socks II.”

Related: Our interview with Beeden, a couple weeks before finishing his row

Beeden’s website says the 53-year-old is the first person to complete the 11,296 kilometre crossing from San Francisco to Cairns, Australia.

When he left on June 1, he expected to complete the voyage within 180 days, but had to contend with often heavy seas, high winds and lack of sleep.

Nearly seven months alone in the vastness of the Pacific Ocean, rowing up to 15 hours a day, Beeden told the Australian broadcast network ABC there were times when his resolve neared its breaking point.

“When I set off from San Francisco, I didn’t realize how difficult this was going to be. I’ve peered right over the edge a number of times and didn’t think I could go on and had to dig deep,” he said.

Back on dry land at the end of his epic voyage, Beeden indicated the enormity of his feat had yet to sink in.

“To be the first person to achieve something like this on this scale is incredible really, and I haven’t processed it yet.”

Originally from Britain, but now living in Burlington west of Toronto with his Canadian wife Cheryl and their two daughters, Beeden described the welcome he received upon his arrival in Australia Sunday as incredible.

“Lots of people whistling and shouting from boats, as I closed in on the marina entrance, the walk ways were full of people shouting and cheering,” he wrote in a post on his website dated Dec. 27.

“I did think I would do a Frankie Detorri dismount by hopping over the rail and say that was the ride of a lifetime,” he wrote in an apparent reference to the Italian horse racing jockey.

“But as I crouched to jump I could feel my legs starting to give way so I stepped off and nearly fell in the water.”

Beeden’s wife and daughters were dockside in Cairns to greet him, and Cheryl Beeden said she felt “great relief” that her husband had arrived safely.

“Incredible. I’m kind of speechless I think. I’ve been living with it for seven months … always knew he could do it,” she told Australia’s ABC network.

“He’s an amazing guy, he’s different than a lot of other people, he’ll always fight to get the mile when he’s having a bad day.”

Beeden describes himself on his website as a “scrawny old Yorkshireman,” but this isn’t the first time he’s made it under his own power from one side of an ocean to the other — he rowed across the Atlantic in 2011 in a voyage that took 53 days.