It’s very big. It stinks to high heaven. And it’s a transplanted Canadian resident. What more could you ask for in a flower? 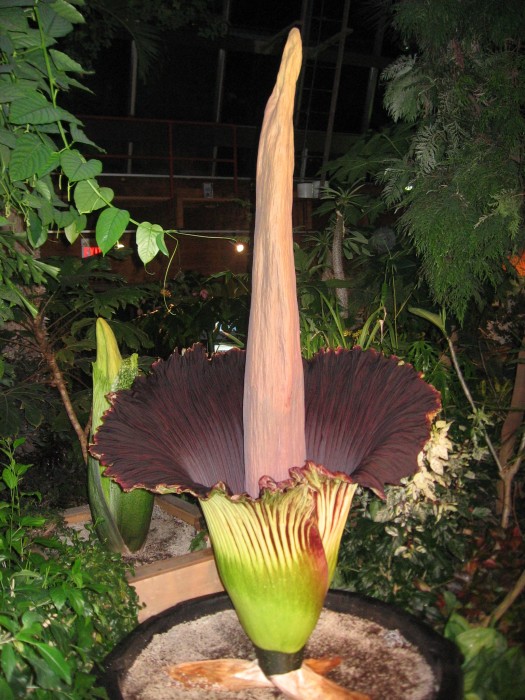 Meet the titan arum, tallest flower in the world and pride of the Niagara Parks Floral Showhouse, where one of the giant plants named “Morph” bloomed spectacularly over the weekend and where its baby brother “Clive” is expected to put on a similar show next weekend or shortly thereafter.

The flowering of one titan arum is rare enough — Morph’s coming out on Friday evening was only the 151st time for which there is a public record of a cultivated titan arum blooming since Italian botanist Odoardo Beccari brought the first seeds from Sumatra to Europe in 1878.

As far as Floral Showhouse supervisor Joan Cornelius can determine, this is the first time a titan arum has ever bloomed in Canada—and Clive will the second, in a week or so.

So it’s a big deal for a big flower. And big they are: Morph topped out at 2.41 metres (taller than the tallest NBA player) and it looks like Clive will be just a tad shorter.

The tallest titan arum on record reached 3.1 metres. That one was grown by Louis Ricciardiello, the same New Hampshire horticulturalist who donated the 70-kilo bulb caches (called corms) for Morph and Clive and four other smaller corms to the Floral Showhouse in Niagara Falls last December.

Now there are a few other things you should know about the titan arum:

Its official name is Amorphophallus titanum—which translates as “giant misshapen penis.” An understandable description when you look at pictures of the flower.

Noted British naturalist David Attenborough gave it the name titan arum in the early 1990s while he was filming his BBC documentary “The Private Life of Plants” — because he didn’t want to say “Amorphophallus” repeatedly on television.

The second thing you have to know is that the titan arum is one of the worst-smelling plants in existence.  Its nickname is “the corpse flower” because it smells like dead, rotting meat — on purpose, to attract carcass-eating insects to pollinate it.

Windows were kept open and air circulation was set on high at the Niagara Falls Floral Showhouse on Friday and Saturday, but staff members said the smell wasn’t too bad — more like old meat in the fridge than something the dog rolled in. By Sunday, the odour was no more than a musky, musty memory.

And finally, titan arum is generally referred to as the world’s “tallest” flower not “biggest” because there’s another monster flower in Sumatra that, while lower to the ground, has a wider bloom. It, too, is known as a “corpse flower” for the same insect-attracting olfactory reasons. 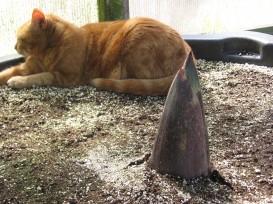 From the time Morph poked its pointy head out of the ground on March 26 until it fully bloomed on Friday night, the flower grew at a monstrous rate — 2-5 cm a day initially and 10-15 cm a day by last week.

Staff at the Floral Showhouse were like expectant parents, waiting all week for the flower to bloom. Once it finally started about 5 p.m. Friday, it only took five hours for the giant to open completely, revealing its blood-red — almost black — interior and fully erect spandix in the centre.

Did champagne corks pop for the happy occasion?

“No,” said showhouse supervisor Joan Cornelius on Sunday, “I wish we had some on hand, but we didn’t. There were just a few of us here watching it open but it was very exciting.”

Cornelius and her staff, going on the experiences of other growers, were expecting their titan arum to stay in bloom for about three days. But nature follows its own timetable. 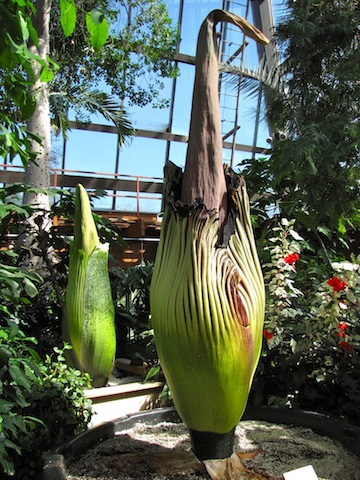 Morph’s glory days were counted in mere hours and by midday Saturday the bloom was fading fast. By Sunday afternoon, visitors were asking “Where’s the giant plant? That’s it?” while standing next to Morph’s withered, wilting remains.

Now it’s another two or three years of leaf growth and dormancy cycles before Morph can be expected to rise again to its full floral prominence.

Luckily, Clive is still on the horizon. Cornelius said Clive appeared about 10 days after Morph so its flowering day is probably a week or so away.

This time the Floral Showhouse staff will be expecting one full day of flowering instead of three. But there’s no blooming guarantee how nature on this scale will unfold.