Canadian Marc Wabafiyebazu, the teen on trial over a Miami shooting that left his brother dead, pleads not guilty 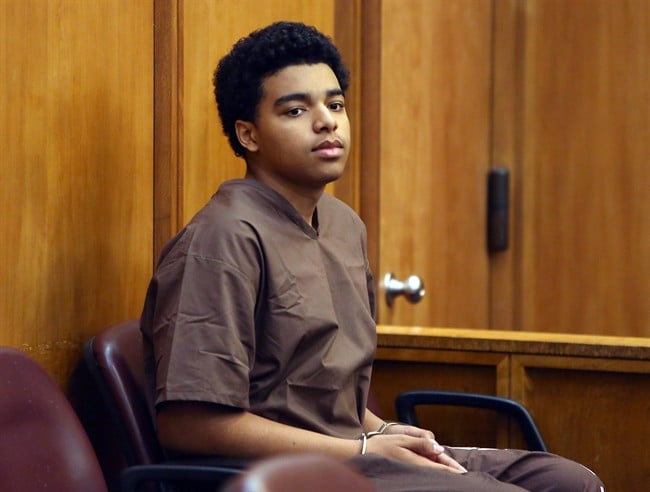 A Canadian teenager caught up in a double killing in Florida will ask a judge on Wednesday to grant him bail pending a trial that could lead to his life-long imprisonment.

Marc Wabafiyebazu has pleaded not guilty to felony first-degree murder and other charges in a drug-related shootout in March that left his 17-year-old brother Jean Wabafiyebazu dead.

Court documents filed in support of the bail application argue that Marc Wabafiyebazu, son of a senior Canadian diplomat, was simply in the wrong place at the wrong time.

“This highly publicized case involved a 15-year-old boy who did nothing more than sit in a car while his brother made a series of bad decisions which cost him his life,” lawyer Michael Corey writes.

“Marc is a child and deserves to be treated as such.”

Related: Miami Vice: How a diplomats’ kids ended up in a drug heist gone wrong

Given the seriousness of the charges for which he is to be tried as an adult, bail would normally be off-limits, but the teen will nevertheless press for interim release at Wednesday’s so-called “Arthur” hearing.

Such a hearing resembles a mini-trial in which both sides will present substantial amounts of information, said Ed Griffith, with the Miami-Dade State Attorney’s Office.

To win bail, the defence will have to convince the judge that the prosecutor does not have enough evidence to prove Wabafiyebazu’s guilt, and that he poses neither a danger to the community nor a flight risk.

The shootout occurred just weeks after the brothers moved from their father’s home in Ottawa to live with their mother, Roxanne Dube, appointed Canadian consul general in Miami in November.

According to police, the elder brother drove them in their mother’s BMW, which had diplomatic plates, to an apartment to buy about 800 grams of marijuana. They allegedly planned to rip off the dealer but something went wrong and gunfire erupted.

However, Corey says surveillance video shows the accused brother stayed in the passenger seat of the car while his sibling went inside, and only followed after hearing the shots.

As such, Corey argues, there are no grounds to find Wabafiyebazu guilty because the felony conviction under Florida law would require his active involvement in his brother’s alleged botched armed robbery of the drug dealer.

Corey also argues in his filings that the “passive” younger sibling fell under the negative influence of his older brother — one of the few people he knew in the city — but never took part in his alleged criminal acts.

Police documents obtained by The Canadian Press show Wabafiyebazu told investigators the brothers had pulled similar stunts in Canada, and that he was brandishing a handgun when arrested outside the residence. They also say he threatened to shoot an officer in the head after his arrest.

Corey, however, said police failed to advise the teen of his rights, and called his purported statements “highly suspect” and inadmissible as evidence.

Rodriguez and another man, Johann Ruiz-Perez, 21, have also pleaded not guilty to felony murder charges in the case.