Canadian killed in EgyptAir crash was in Paris for a family reunion: daughter 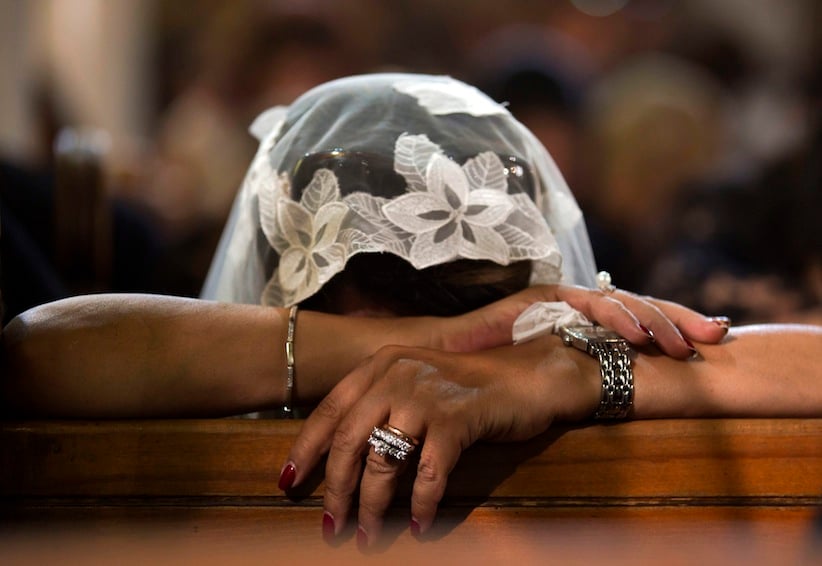 A Coptic Christian grieves during prayers for the departed, remembering the victims of Thursday’s crash of EgyptAir flight 804, at Al-Boutrossiya Church, the main Coptic Cathedral complex, in Cairo, Egypt, Sunday, May 22, 2016. Making his first public comments since the crash of the Airbus A320 while en route from Paris to Cairo, Egyptian President Abdel-Fattah el-Sissi said Sunday, in comments broadcast live on Egyptian TV channels, that it “will take time” to determine the exact cause of the crash, which killed all 66 people on board. (AP Photo/Amr Nabil)

A surprise family reunion ended in tragedy when a Canadian man who had flown out to join the festivities was later killed in the mysterious EgyptAir crash.

Medhat Tanious of Toronto was one of two Canadians to die when Flight 804 plunged into the Mediterranean Sea on Thursday en route from Paris to Cairo.

His daughter Merna said her father had flown to France to surprise his youngest sister, who lived in Australia and who was meting other family members in Paris. He was en route to Cairo to visit his in-laws at the time of the crash, she added.

Merna Tanious said she, her mother Gehan Erian and sisters Marina and Mariem are seeking solace for his death by remembering his impact on others.

“He had a heart of a child,” Merna Tanious said in a telephone interview from Toronto. “He loved unconditionally, and he had an unbelievable ability to forgive all people that did him wrong.”

Medhat lived much of his life in Egypt, his daughter said. He married Erian in 1988 and the couple began raising their three girls there before deciding to immigrate to Canada in 2004.

“He brought us here to try and give us the best life possible, and that’s what he did every single day,” Merna Tanious said.

She declined to discuss what her father did for a living, but said he became quite active in Toronto’s Coptic Orthodox Christian community.

Upon learning of his death, she said hundreds of mourners filled a cathedral north of Toronto on Monday to offer prayers and share memories of a man who they felt had a gift for connecting with people.

“He would cheer everyone around him. He fit into every single generation from the seniors to the teenagers,” Merna Tanious said. “He can sit with anybody and make them laugh.”

Medhat Tanious’s trip to France, undertaken less than a month after his 54th birthday, was an impromptu affair meant to surprise one of his two siblings who currently live on the other side of the world. His other three siblings have also relocated to Canada.

Tanious was one of two Canadians killed in the EgyptAir crash, which is currently being investigated by international aviation authorities.

The other, Marwa Hamdy, was born and raised in Saskatchewan before relocating to Egypt. Friends described her as a devoted and loving mother to her three school-age sons.

The cause of Thursday’s crash that killed all 66 people aboard still has not been determined. Ships and planes from Egypt, Greece, France, the United States and other nations are searching the Mediterranean Sea for the jet’s voice and flight data recorders.

Egypt’s civil aviation minister has said he believes terrorism is a more likely explanation than equipment failure or some other catastrophic event. But no hard evidence has emerged on the cause, and no militant group has claimed to have downed the jet. Leaked flight data indicated a sensor detected smoke in a lavatory and a fault in two of the plane’s cockpit windows in the final moments of the flight.