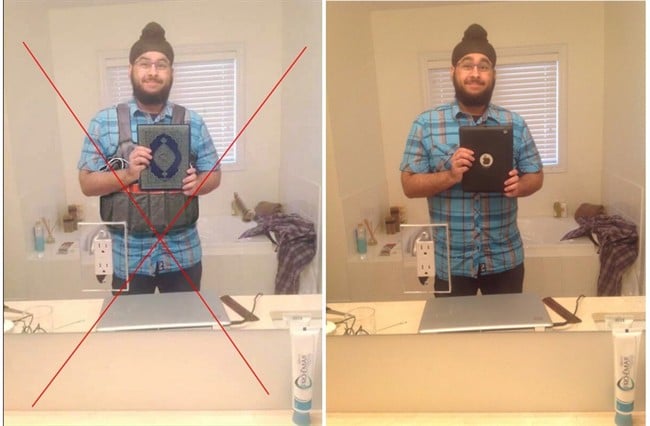 TORONTO – A Canadian man is defending his name and reputation after he was falsely depicted as one of the masterminds of Friday’s deadly attacks in Paris.

Veerender Jubbal took to Twitter after an altered photo of him began surfacing in international media with captions identifying him as a terrorist. A Spanish newspaper, La Razon, has since apologized for running the doctored picture.

The original image of Jubbal was a selfie that showed him posing in his bathroom with the iPad in his hand that was used to take the photograph.

But it was manipulated to show him wearing a suicide vest and holding a Qu’ran.

Jubbal tweeted that the image had made its way onto the front page of La Razon with a caption identifying him as one of the suicide bombers that stormed the French capital on Friday, killling at least 129 people and injuring scores of others.

He says it wasn’t long before people around the world, including family members in India, had seen the image and reached out to let him know about it.

In addition to defending his name, Jubbal also criticized the photoshoppers for mistaking a Sikh for a member of the Islamic State, which has claimed responsibility for the co-ordinated attacks in Paris.

“In gauging this entire incident — millions upon millions of people have seen the photoshopped images, and have placed me as a terrorist,” Jubbal tweeted, adding the “strange” situation has him pondering suing newspapers that published the altered image.

The case highlights how vulnerable today’s online citizens are, said Melonie Dodaro, a Kelowna, B.C.-based social media consultant. Even non-controversial content can become dangerous in the wrong hands, she pointed out.

“The Internet’s the Wild, Wild West,” she said. “There are not a lot of things you can do to protect yourself.”

“Portraying @Veeren_Jubbal as a terrorist puts his life at risk, ruins his reputation. This is online terrorism,” wrote one Twitter user.

Others openly mused about the racial mix-up and wondered whether they could be subjected to similarly arbitrary typecasting.

“As a white European living in England, should I worry that I have recently grown a beard?” another Twitter user asked him.

Other tweets documented some of the backlash that came Jubbal’s way after the picture first surfaced.

“Can’t believe people told @Veeren_Jubbal one way of avoiding being photoshopped to look like a terrorist is to not post selfies online.”

Jubbal wrote that he watched his name and image become a globally trending topic on social media, adding that other publications besides the Spanish newspaper had reprinted the image.

Amid the social media posts detailing the incident, Jubbal issued a message to those who altered the image.

“Learn the difference between me being a Sikh and a Muslim,” he wrote.