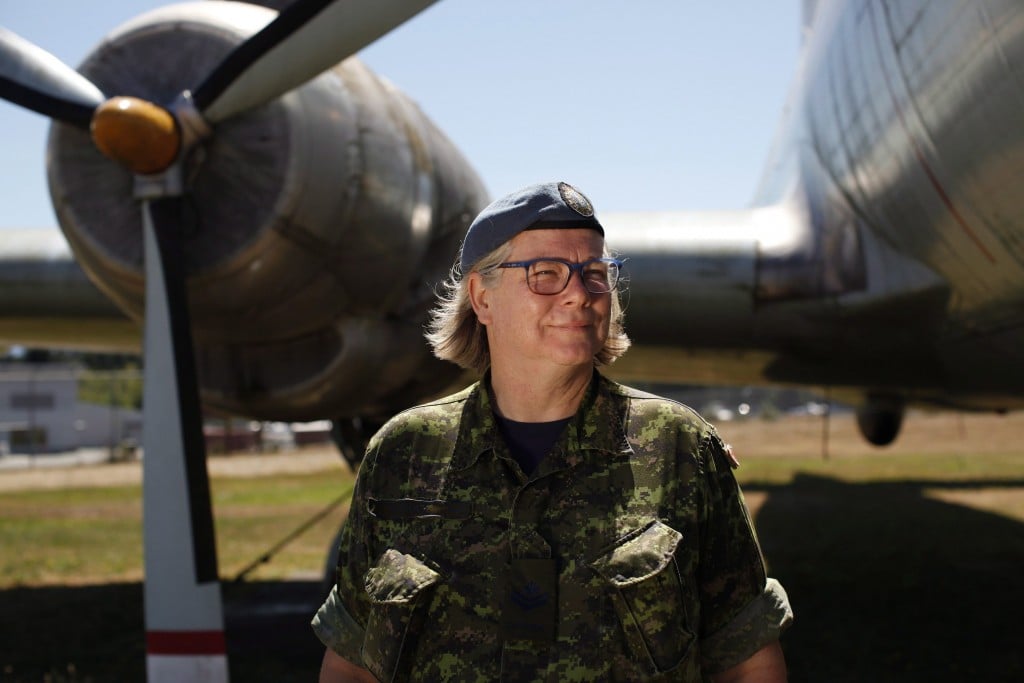 Master Cpl. Natalie Murray, who works at the instrument flight rules control centre at CFB Comox, poses for a photograph beside the Canadair CL-28 Argus Mark 1 at Heritage Air Park near the base in Comox, B.C., Friday, July 29, 2016. THE CANADIAN PRESS/Chad Hipolito

OTTAWA – As the U.S. military prepares to open its doors to transgender people for the first time, the Canadian Armed Forces is looking at ways to improve its own transgender policy.

Canadian military officials reviewing the current policy, which came into effect in February 2012, are hoping to have a draft of the new policy finished by the end of the year.

The military officer in charge of the review says some of the expected changes will be technical in nature, but others will aim to give commanding officers and units more guidance in how to accommodate transgender military personnel when it comes to such basics as bathrooms and showering.

“The Canadian Forces is unique in that it houses and clothes people,” said Lt.-Col. Monique Goyette of the military’s directorate of human rights and diversity. “We’re intending on having an actual form in there that will kind of be a checklist to help COs (commanding officers) even better than before.”

There are no official figures for how many transgender people are serving in the military, but estimates put the number at about 200.

Murray, an electronics technician at Canadian Forces Base Comox, B.C., who transitioned in 2003, said the chain of command is often quick to crack down on such misconduct. However, she said the fact such incidents continue to happen highlights the need for more information and education.

“It’s not just the COs in the upper echelons,” she said. “It’s got to filter down, especially within the transitioning individual’s chain of command. Even right down to his or her immediate supervisor. Because it only takes one person to create a bit of a kerfuffle.”

The Canadian Forces lifted its ban on members of the LGBT community serving in uniform following a high-profile case in 1992. It has also funded dozens of sex-reassignment operations in the last two decades, including 19 between 2008 and October 2015.

But Alan Okros, an expert on diversity in the military at the Canadian Forces College in Toronto, said that until 2012 transgender cases were dealt with on an ad hoc basis.

The current policy is working well, Okros said, but there are areas for improvement. For example, it’s still difficult for transgender personnel to have medals reissued in their new name. Some military doctors are also too rigid when it comes to letting transgender members who are transitioning go back to work.

“These are serving military members,” he said. “It’s not uncommon for people to be pushing back against the doctors and saying ‘Let me go back and join my unit.'”

Under the current policy, the military will accommodate the needs of transgender members except in extreme circumstances such as significant extra costs or potential threats to the health and safety of other military personnel or the public.

It also requires unit commanders to “provide a work environment free from discrimination and prejudice” while respecting the member’s right to privacy. At the same time, it says commanders will need to strike a balance between the needs of the transgender member and others in the unit.

“It’s really up to the local CO and the transitioning member, based on the circumstances of that unit, to decide how they are going to address this,” Goyette said. “And that’s why I believe some of them felt a bit more guidance was needed to help smooth everything for all concerned.”

But as good as any policy is, Okros said common sense must take precedence at the end of the day.

While the Canadian military has accepted transgender people in uniform for more than 20 years, the U.S. only recently announced it would do the same.

“The Defense Department and the military need to avail ourselves of all talent possible in order to remain what we are now — the finest fighting force the world has ever known,” U.S. Defense Secretary Ashton Carter said on June 30.

“We don’t want barriers unrelated to a person’s qualification to serve preventing us from recruiting or retaining the soldier, sailor, airman or marine who can best accomplish the mission. We have to have access to 100 per cent of America’s population.”

The Canadian military’s Goyette said the U.S. decision, as well as legislation recently introduced by the Liberal government to protect transgender people and recent high-profile examples such as Caitlyn Jenner, reflect a growing awareness and understanding of the issues.

Still, Murray, who has served almost 30 years in uniform and plans to reach the 35-year mark, said there is a “huge segment of society that looks at somebody who is trans and the first thing they think of is either a crossdresser or a drag queen, and neither is the case.”

Hence the emphasis on education.

“From my perspective, we’re doing very well,” Murray says of the military. “There have been a lot of positive changes since I transitioned 13 years ago, and all of it’s been good. But there’s still a lot of work to be done.”