Canadian officials hopeful despite failure of talks to salvage CETA 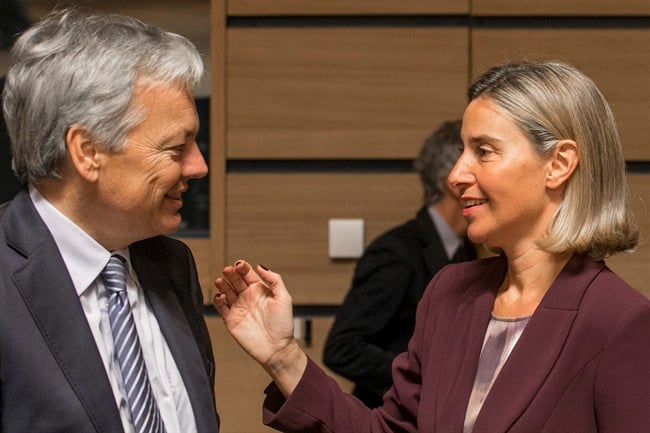 OTTAWA – A weekend push to persuade a small but essential pocket of Belgium to support the sweeping Canada-Europe trade agreement has yet to resolve differences ahead of a key meeting that could determine the fate of a deal deeply coveted by Ottawa.

But Canadian officials remain hopeful a solution can be found to salvage the agreement.

EU trade ministers are scheduled to hold a vote Tuesday on a pact that has the powerful backing of Europe’s 28 member states and Canada, all of which combined represent about 535 million people.

“(Tuesday’s) vote will be very key,” Foreign Affairs Minister Stephane Dion said in Montreal. “We renegotiated the rules of the deal so that we fully clarified that governments can legislate, on their own, progressive social and environmental policies.”

The path to signing the treaty, however, remains uncertain, thanks to vociferous opposition from the comparably tiny region of Belgium — home to just 3.5 million people.

To get it done, trade ministers from all EU nations must unanimously approve the deal, known as the Comprehensive Economic Trade Agreement, or CETA. Otherwise the deal would effectively die after seven years of sometimes controversial talks.

Canadian and EU officials have been racing to persuade Belgium’s Wallonia region to ditch their opposition to the agreement.

Last Friday, Europe’s ability to unanimously approve the pact suffered a blow when Wallonia’s legislature voted to reject the deal.

Opponents to the pact in the French-speaking Belgian region are concerned it would leave farmers and industrial sectors too exposed to cheaper imports from Canada. Some have cautioned it could also erode local standards for food, labour and the environment.

“We are working hard with our European partners so CETA can be signed this fall and implemented next year,” Alex Lawrence wrote in an email.

“It is an excellent agreement for Canada and the EU, and will deliver positive results and opportunities for both citizens in the EU and Canada.”

Dion said that if Europe doesn’t sign what he called a “progressive” deal with Canada, “then with whom will they ratify?”

“These investment rules are very progressive. They give the last word to governments and not to industry and (the deal) will be a model for the world.”

David Lametti, Freeland’s parliamentary secretary, has also met with Walloon leaders in the region for talks.

The Belgian constitution gives its three regional governments, including Wallonia, a potential veto over the deal. Without the region’s support, the country’s national government, which is in favour of the deal, would be unable to proceed.

The agreement has the support of all the other EU member states.

On Monday, its supporters remained hopeful the pact would survive. The decision could also spill into a gathering of EU leaders later in the week.

“If not, at the end of the week during the summit of EU leaders.”

Next week, Prime Minister Justin Trudeau is set to fly to Brussels to sign the agreement, but only if it has unanimous backing from all the EU nations.

The deal is expected to yield billions in added trade through tariff cuts and other measures to lower barriers to commerce. At the same time, the EU says it will keep in place the strong safeguards on social, environmental and labour legislation which have given Europe some of the toughest standards in the world.

Wallonia said last week that the guarantees were not good enough and called for more talks.