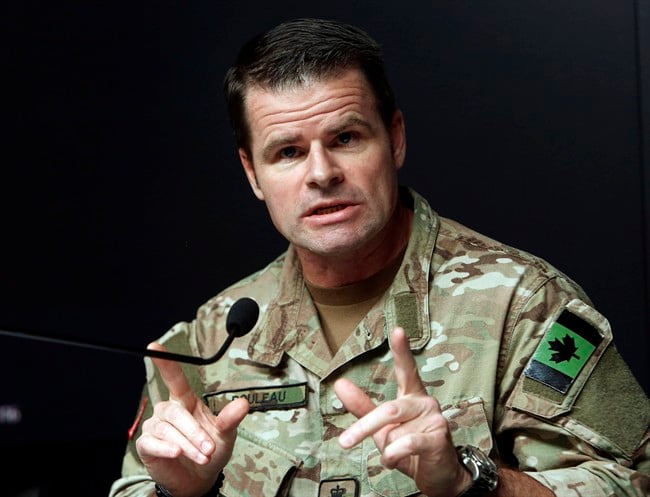 Maj.-Gen. Mike Rouleau, commander of Canadian Special Forces Operations, told reporters the three suicide vehicles were charging the Kurdish lines and could have caused “mayhem” if they had not been destroyed.

“The Kurds do not possess weapons like we have,” he said. “So our three engagements with anti-armour weapons systems prevented that from happening several thousand metres before they wanted to detonate.”

The comments came amid an ongoing debate over whether Canadian troops in Iraq are involved in combat, which was further fuelled this week by revelations some of the more than 200 soldiers have shot first.

MORE: Canada’s role in the fight against ISIS is bigger than you think

The Liberal government has been accused of hiding information and even misleading Canadians about the nature of the mission, after promising to end the combat mission in Iraq during last year’s election campaign.

In March, they withdrew six CF-18 fighter jets that had been deployed by the previous Conservative government to bomb ISIS targets in Iraq and Syria.

But the Liberals tripled the number of special forces soldiers on the ground in northern Iraq to more than 200 from 69, even though they had insisted while in opposition that those troops were also in combat.

Military officers say Canada’s “advise and assist” mission has evolved from primarily training the Kurds behind the lines to supporting Kurdish operations, but that the rules governing the mission have not.

Rouleau said Canadian troops are not leading the fight or engaged in any “offensive combat operations” as a unit against the Islamic State of Iraq and the Levant, or Daesh.

“We have never accompanied any leading combat elements,” he said. “My troops have not engaged in direct combat as a fighting element in offensive combat operations. We do not plan on that basis, because our mandate does not allow us to do so.”

Rather, he painted a picture of Canadian troops sitting on rooftops or hilltops with sniper rifles and other weapons, largely watching but also ready to protect Kurdish forces as they advance or civilians as they try to flee the fighting.

“From deliberately-selected positions that maximize our utility to advancing Kurd forces, we have either defended ourselves, defended friendly forces, or defended civilians who are caught in the middle,” Rouleau said.

“And we have done so with kinetic force against Daesh.”

Rouleau said there has been a “substantial” increase in the number of times Canadian troops have fired on ISIS forces since Iraqi and Kurdish forces launched their attack to free the city of Mosul.

Only a minority of incidents involved Canadians shooting first, he added.

A former Ottawa police officer, Rouleau at one point compared the rules governing his soldiers in Iraq to those that dictate when a police officer can use lethal force.

“I think it’s reasonable to conclude that we would not expect to deploy our soldiers overseas with any lesser ability to defend themselves than our police officers have in Canada.”

Rouleau’s comments appeared to have no impact on opposition critics, who say the government and military are playing word games to fit the Liberals’ promise of a non-combat mission.

“The Canadians Forces who are there need to do everything possible to protect themselves, to defend themselves, and to make a contribution to the mission,” said NDP defence critic Randall Garrison.

“The point is that the Liberals promised they would not be in a combat situation, and they’ve clearly broken that promise.”

Conservative defence critic James Bezan accused the Liberals of putting military commanders in an “uncomfortable position” by insisting that the mission be labelled non-combat.

“This is now strictly a supportive role, but it is a combat role,” Bezan said. “We’re okay with that. But the government should be open and transparent about what it is.”

Much of Wednesday’s briefing focused on the activities of Canadian soldiers near the frontlines in Iraq, but commanders also revealed that Canadian troops have provided medical assistance to 600 Kurdish and Iraqi government soldiers.

But Rouleau said there had not been any instances of that happening as the extremists prefer to fight to the death rather than surrender.

Canadian commanders were also adamant that the clock is counting down to the liberation of Mosul and the end of ISIS as a military force, though Bowes said the group will remain a threat to Iraq and the world for some time.

MORE: The challenges of a post-liberation Mosul

Military commanders are considering how the mission will need to change after Mosul is liberated, Bowes said. They will present options to the government to consider.