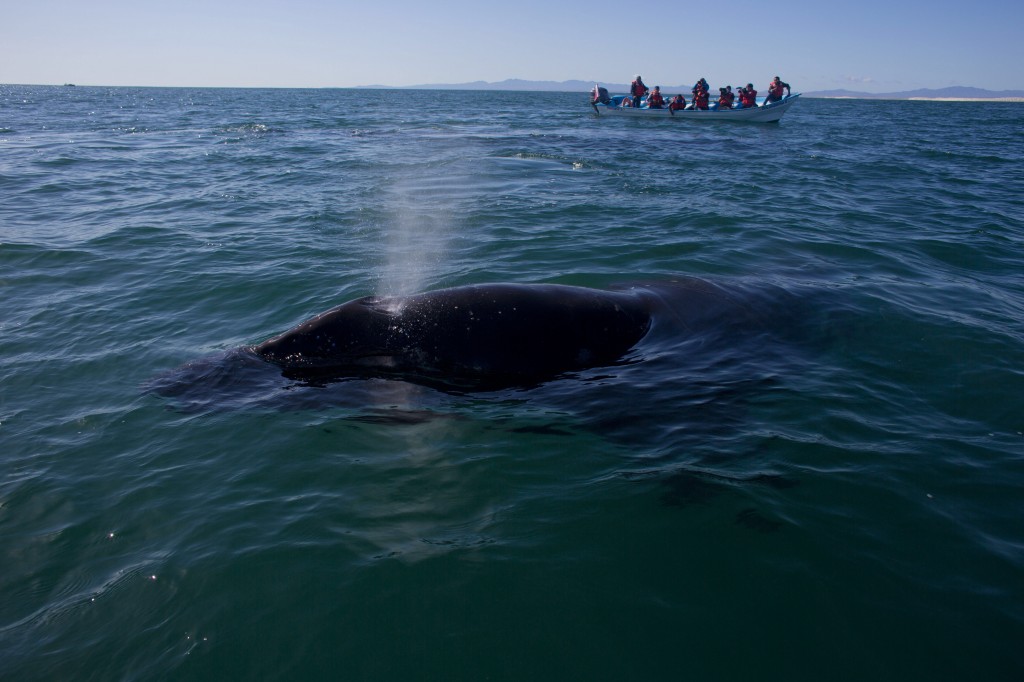 A grey whale calf expels air through its blowhole as a boat filled with visitors watches in the San Ignacio lagoon, on the Pacific Ocean near the town of Guerrero Negro, in Mexico’s Baja peninsula. (AP Photo/Dario Lopez-Mills)

The Attorney General’s Office for Environmental Protection said two other tourists suffered “considerable” injuries when the whale breached and hit the side of the boat on Wednesday.

The office said the boat had been carrying nine tourists on a snorkel tour and quite near shore when the collision occurred. It described the vessel as “a fragile type with inflatable parts.”

The Baja California Sur state prosecutor’s office said the collision near the beach resort of Cabo San Lucas tossed the victim into the water.

A crew member and a passenger lifted her back onto the vessel and Mexican navy personnel moved the woman to shore. She was taken to a clinic, where she died during treatment.

The woman’s hometown has not been released. John Babcock, a spokesman for Canada’s Foreign Affairs Department, said that “to protect the private and personal information of the individual concerned, further details on this case cannot be released.”

“Canadian consular officials in Cabo San Lucas are providing consular assistance to the family in this difficult time,” Babcock said.

Whales surface to breathe, often unexpectedly. Collisions between whales and boats are not unknown in Mexico, where whales come to breed in coastal lagoons in winter. Authorities generally require boats to stay a safe distance away from whales in whale-watching areas and protected reserves, but those rules don’t apply in the area around Cabo San Lucas.

In January 2014, a boat and a humpback whale collided off the coast of Baja California, injuring a U.S. tourist and three other people on board.