‘I could see the disruption we were causing’

It’s the nights that Ron Parkes remembers most. Sitting behind a machine gun in the 40-degree heat and listening to the noises of the jungle as his fellow soldiers slept. He couldn’t see his own hands in front of him, let alone the Viet Cong in the distance, probing the makeshift American camp. “It was the waiting, the tension—you could almost smell it in the air,” Ron says. “It was almost a relief when you did start shooting. At least you knew what you were doing.”

Ron spent four months in Vietnam in the summer of 1965. Born and raised in Winnipeg, he’d set out to join the Canadian Army three years earlier but was turned away because of a federal austerity program that had frozen the military. So he joined the American military as a paratrooper instead. “It was the toughest month of my life,” Ron says of one period of training. “We were averaging 900 push-ups a day. Anytime we made a mistake, they’d drop us for 20, and we were always doing something wrong. Turned out the easiest thing to do in that course was jump out of the airplanes.”

FROM THE ARCHIVES: A. Beverley Baxter, a British MP, makes the case for hanging Hitler (1943)

In July 1965, Ron left San Francisco with 3,700 other soldiers aboard a troop transport built for 2,000. Stacked four high on canvas beds during the 20-day voyage, they couldn’t all stand up at once. “When we landed in Cam Ranh Bay, the sand was so white it hurt our eyes,” he says. “The colours were so vivid. If it wasn’t for the war, it would have been one of the most beautiful places on Earth.”

With the introduction of the helicopter, Ron’s training as a paratrooper was all but useless, so he joined an artillery battery, providing cover fire for infantry. “It was 24/7,” he explains. “You could get called upon to fire missions in the middle of the night.” The middle of the third night was indeed Ron’s introduction to the war. He woke up to the sound of machine guns firing and red dots dancing above his head. It turned out to be friendly fire.

In September, a real firefight erupted when an American company landed right in the middle of a VC battalion. Ron’s battery rushed in to provide support, firing 1,300 rounds in 24 hours, but the three-day battle killed more than a dozen paratroopers and injured another 33—at that time, the biggest loss of the war. Weeks later, the battery repeated the process during another operation. 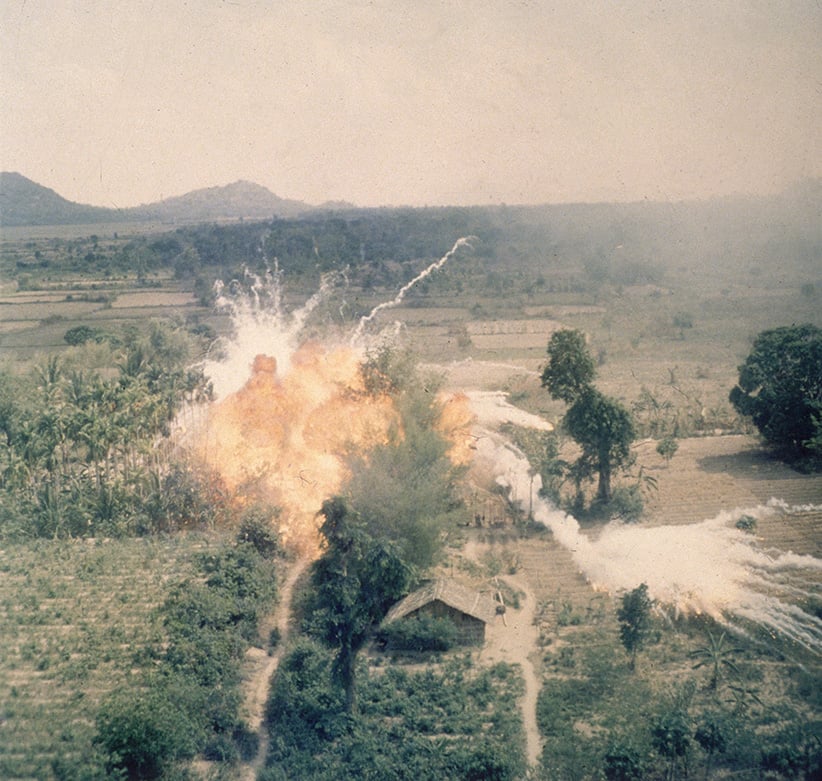 Then, suddenly, Ron’s three-year enlistment came to an end, and he returned home, proud but dismayed by the destruction. “The Vietnamese people were just trying to get on with their lives,” he says. “Even as a young man, I could see the disruption we were causing was pretty bad. As always, it’s the civilian population that suffered most.”

After the war, Ron worked as a longshoreman in northern B.C. before traversing Western Canada as an iron worker. In 1978, he got married—inheriting four stepchildren in the process—and, years later, began a 20-year career as a corrections officer.

Because Ron was in the American army, the Royal Canadian Legion didn’t recognize his service, or that of the thousands of other Canadians who fought in Vietnam. So, in 1986, he joined the newly formed Canadian Vietnam Veterans Association, an organization that has helped vets get their American benefits, won recognition north of the border and memorialized Canadians who died in the war. Ron has been its president for nearly a quarter-century.

Though he was recently diagnosed with Parkinson’s disease, Ron continues to work part-time as a security officer at a concert hall in Winnipeg. “I got out of uniform in 1965, was back in uniform as a corrections officer, and in retirement I’m back in uniform again,” he says. “I still shine my boots and try to look as presentable as possible.” — Luc Rinaldi