In Canada, the attack—which came during Pride month—leaves communities in shock 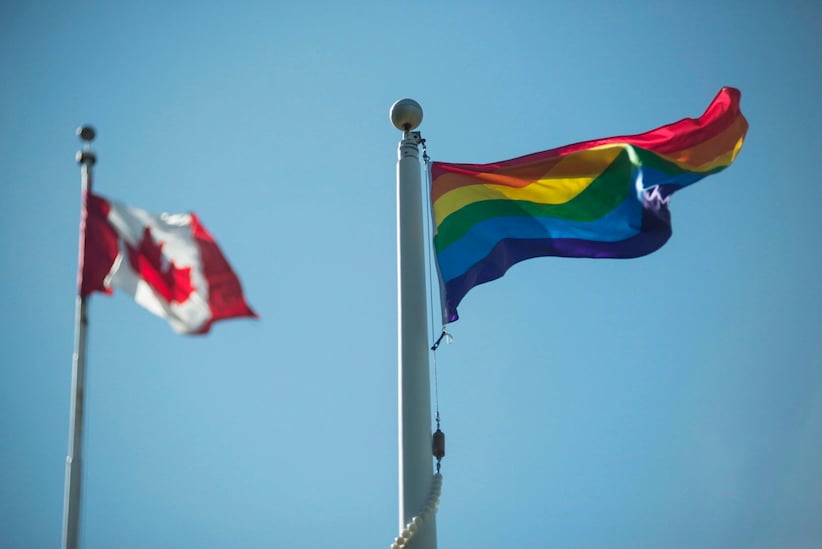 A rainbow flag flies at Queen’s Park at the annual Pride flag raising ceremony at the official launch of Pride Month in Toronto on Wednesday, June 1, 2016. THE CANADIAN PRESS/Eduardo Lima

After a mass shooting on Sunday that killed at least 50 people and injured dozens more at a gay nightclub in Florida, many Canadians were reflecting on what the violence means for the LGBTQ community.

Candlelight vigils to mourn the victims were planned in several Canadian cities Sunday night, including Toronto and Vancouver.

A gunman wielding an assault-type rifle and a handgun opened fire inside a crowded gay nightclub in Orlando early Sunday morning. He was shot and killed by police.

The attack came during Pride month, both in the U.S. and Canada.

The executive director of Pride Toronto, a not-for-profit with the goal of bringing together the city’s LGBTQ community, said the massacre was a grim reminder of the setbacks his community faces.

“It reminds us that hate and discrimination are still a big part of this society, and that because of this, some of our brothers and sisters this morning lost their lives,” Mathieu Chantelois said on Sunday.

The organization also runs Toronto’s pride month, and Chantelois said Pride Toronto was already working with city police and the RCMP but would see if there were any additional security steps that could be taken.

“The main objective of Pride is to create a safe space for our community to gather together and feel comfortable,” he said.

A manager at a prominent Toronto gay bar said the massacre likely won’t prompt his establishment to increase security at the club.

“You can’t live in fear because of one incident,” said Cameron Rennie, a manager and bartender at Woody’s in Toronto.

Spencer Chandra Herbert, a member of the British Columbia legislature, was in Quesnel, B.C., celebrating the small town’s second annual pride celebration with his husband when he heard the news. His immediate reaction was disbelief.

“To think that in this so-called accepting day and age that this hatred is still there and could strike at any time, it’s unbelievable,” Chandra Herbert said.

Hearing about the massacre was especially crushing in the wake of celebrating love with a small community.

“I’ve been hearing from people how much it means to them to see somebody there, a politician there with their husband, walking hand-in-hand down the main street,” Chandra Herbert said. “It sends a pretty strong signal that we here believe in diversity and will stand up against hatred for love.”

The violence shows there’s still work to be done in educating people and spreading awareness and understanding of LGBTQ issues, said Herbert, who has repeatedly tried to get transgender rights legislation passed in B.C.

“(Education) is still vitally important because there are still people hiding in closets, afraid of coming out because of violence or fear of being disowned by family members or being beaten up at schools. It’s still an issue,” Chandra Herbert said.

“There are pockets of bigotry here and there, and we try to deal with those as best we can,” Stelmach said. “Hopefully, as we grow as a community, we will extinguish all that bigotry.”

“While authorities are still investigating and details continue to be confirmed, it is appalling that as many as 50 lives may have been lost to this domestic terror attack targeting the LGBTQ2 community,” he said.

Ontario Premier Kathleen Wynne, who is openly gay, wrote on Twitter that her thoughts are with the LGBTQ community while B.C. Premier Christy Clark tweeted that she is “incredibly saddened by the evil brutality” of the Florida shooting, and that her province “stands united with (Orlando) against terror and hate.”

Montreal Mayor Denis Coderre has announced that the city will fly the rainbow flag at City Hall in solidarity with the LGBTQ community.

—By Nicole Thompson, with files from Gemma Karstens-Smith in Vancouver, Rob Drinkwater in Edmonton, Morgan Lowrie in Montreal, and The Associated Press.