Canadians remember and say thank you to those who served

A look at some moments during Remembrance Day ceremonies in Canada 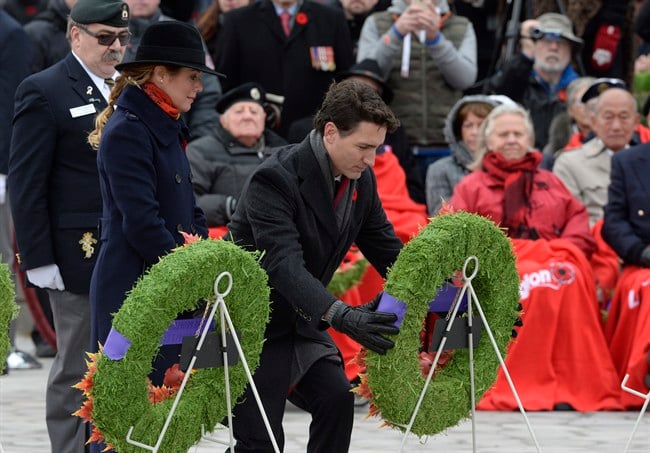 Prime Minister Justin Trudeau lays a wreath as Sophie Grégoire Trudeau looks on as they take part in the National Remembrance Day Ceremony at the National War Memorial in Ottawa on Friday November 11, 2016. (Adrian Wyld/CP)

OTTAWA – Canadians from coast to coast paused in remembrance and gratitude Friday for those who offered their lives in service of their country — but it was one young woman’s personal gesture that Darrel MacDonald will never forget.

In a wheelchair since a spinal-cord injury during a training accident in 1998 cut his military career short, MacDonald had travelled to Ottawa from Halifax this week for his first Remembrance Day in the capital.

He was fighting back tears at the memory of a fallen comrade, describing the importance of thanking a veteran in front the National War Memorial, when a young woman emerged from the crowd to do exactly that.

“Thank you,” she said, looking MacDonald in the eyes and shaking his hand. “God bless you.”

With that, she vanished back into the crowd almost as quickly as she appeared, leaving MacDonald momentarily speechless.

“Like that,” he finally said. “That just made my day.”

With the passage of time has come ever greater distance between Canada and the great conflicts that shaped it over the course of the 20th century.

The last surviving First World War veteran died more than six years ago, and the number of veterans from the Second World War and Korea continues to shrink.

Yet there was a sense from some of the thousands who braved the wind and cold Friday in Ottawa that the country’s commitment to reflection and remembrance remains stronger than even 20 or 30 years ago, thanks in large part to Afghanistan.

“It’s great to see that there are so many people that come out for this sort of thing,” said Chief Warrant Officer Darren Hessel as he looked around at the crowd.

But he also said the sad fact is that once Canadians started dying in Afghanistan, it renewed the public’s appreciation for those who serve in the military, which had started to fade after Korea.

“Once we start seeing our soldiers being killed overseas,” he said, “it’s something that starts to pick up again.”

Thousands of Canadians served on operations overseas as peacekeepers in the decades between Korea and Afghanistan. Many participated in Friday’s march around the memorial, their bright blue berets filling in the gaps where years ago Second World War and Korean vets would have stood.

But their contributions were largely overlooked, said retired warrant officer Ryan Canning, who also felt the crowds at Remembrance Day in recent years have been stronger than a few decades ago.

“The peacekeepers were completely underappreciated for their efforts, so the turnouts weren’t as big,” Canning said. “But now a 10-year war, we lost 158 soldiers.”

In Ottawa, the crowd gathered early, and included current and former military members, out-of-town visitors and families with young children — a new generation of Canadians learning the importance of remembrance.

The crowd was silent as the Peace Tower tolled 11 a.m. and the crisp bugle notes of the Last Post cut through the air. The onlookers listened quietly as cannons boomed their salute and prayers were offered for generations of military dead.

Johnston and his wife both wore military uniforms — he in the blue of the air force as commander-in-chief; she as an honorary navy captain — alongside Prime Minister Justin Trudeau, his wife Sophie Gregoire-Trudeau and other dignitaries.

After the prayers, Johnston and Trudeau placed wreaths. Colleen Fitzpatrick, this year’s Silver Cross Mother, laid a wreath on behalf of all bereaved mothers.

Her son, Cpl. Darren Fitzpatrick, was mortally wounded by an improvised-explosive device in Afghanistan in March 2010.

Canadians cannot forget either those who served or the terrible cost of war, Trudeau said in a statement.

“When we remember, we must remember war as it was and as it is. Freedom’s terrible price is known but to the few who have fought for it.”

Other Remembrance Day ceremonies were held across the country.

In Halifax, a trio of helicopters whirred through the clouds above the Grand Parade as hundreds of members of the public, military personnel and veterans stood for a two-minute silence.

The ceremony was punctuated by the sound of cannon from the Halifax Citadel for a 21-gun salute.

“Whether it’s been in peacetime or in war, their sacrifice allows us to have the wonderful life that we have in Canada,” he said.