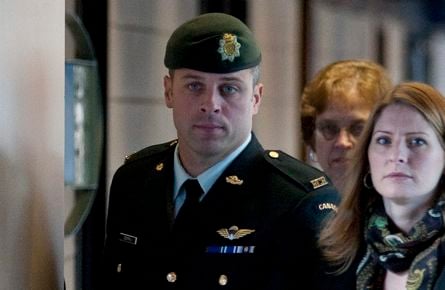 A Canadian soldier has been kicked out of the army—but spared a stint in prison—for shooting a severely wounded insurgent on the battlefields of Afghanistan two years ago. Capt. Robert Semrau, whose controversial case sparked a nationwide debate about the ethics of mercy killing in a war zone, stood at the front of a packed courtroom Tuesday morning as a military judge announced his punishment: a demotion in rank, and dismissal from the Forces.

Semrau—who at one point faced the possibility of life behind bars, with no chance of parole for ten years—will not serve jail time for his “disgraceful conduct.” But his career in uniform is now over. “You failed in your role as a leader,” said the judge, Lt.-Col. Jean-Guy Perron. “How can we expect our soldiers to follow the rules of war if their officers do not?”

Countless Canadians have rallied behind Semrau since his arrest, convinced that he did the moral thing by putting a gravely injured insurgent “out of his misery” (a Facebook page set up in his honour has thousands of members). But Perron painted a very different portrait of the 36-year-old officer, saying he violated the military’s most basic rules of discipline and no longer deserves to serve. “Shooting a wounded, unarmed insurgent is so fundamentally contrary to our values, doctrine and training that it is shockingly unacceptable behaviour,” Perron said, pausing often to look Semrau in the eyes. “You made a decision that will cast a shadow on you for the rest of your life.”

A father of two young daughters, Semrau was on patrol in Helmand Province on the morning of Oct. 19, 2008 when his unit—a small band of Canadian troops mentoring a company of Afghan National Army (ANA) soldiers—encountered an unidentified man lying on a dirt path. He had been shot out of a tree by a U.S. Apache helicopter, and in the words of one eyewitness, was “98 per cent” dead.

Canadian soldiers are bound by the Geneva Conventions and the military’s own code of conduct to offer First Aid to all casualties, friend or foe. But the senior Afghan officer on the scene decided that the man was too wounded to save, telling the others: “If Allah wants him, he will die. If not, he will live.” In his capacity as a mentor, Semrau had no authority to overrule the ANA commander.

But rather than leave the man to suffer his fate, Semrau made a difficult choice: he raised his C-8 rifle, aimed it at the insurgent’s chest, and pulled the trigger. According to numerous witnesses, he later confessed that it was a “mercy kill.”

When military investigators caught wind of the incident two months later, Semrau was charged with four offences, including second-degree murder and negligent performance of duty. He was arrested, flown home, and put on trial—the first Canadian soldier ever accused of homicide on the battlefield.

In July, however, a military jury found him guilty of only one count: disgraceful conduct. The members concluded that Semrau did indeed shoot the unarmed man, but with no corpse and no forensic evidence, they were not convinced beyond a reasonable doubt that his bullets actually killed the insurgent.

For Semrau and his supporters, the verdict was bittersweet. Instead of life behind bars, the captain was now staring at a sentence of no worse than five years in prison. But the verdict fell far short of the complete exoneration he was hoping for—and all but assured that his days in uniform were numbered.

On Tuesday, that fact was confirmed. Perron opted against jail time, but demoted Capt. Semrau to second lieutenant (the lowest rank in the officer corps) and ordered his release from the army. “Your actions may have been motivated by an honest belief you were doing the right thing,” the judge said. “Nonetheless, you have committed a serious breach of discipline.”

Perron said the sentence strikes a proper balance between punishment and deterrence, and sends a strong message to the rank-and-file that every soldier is obliged to obey orders, not their own moral code. “Decisions based on personal values cannot prevail over lawful commands,” he said.

At one point, Perron specifically criticized Semrau for putting his subordinates in the difficult predicament of either tattling on their commander or keeping quiet, which is itself a punishable offence. “Your actions did have a negative impact on your team,” he said. “Capt. Semrau, I do not know if you have taken any time to reflect on this question in the last year. If not, do so.”

Semrau has never spoken publicly about what happened that morning two years ago, and even after his conviction he chose not to address the court. His sentencing hearing was no different. When the judge finished reading his reasons, Semrau stood at attention, saluted, and walked through a side door with his wife, his brother and his parents. He left the building without speaking to reporters.

“He’s very disappointed,” said Capt. David Hodson, one of his lawyers. “He’s a warrior. He would love to be serving the Canadian Forces and serving his country. He thanks you all and he thanks the Canadian public for all the support he’s been given throughout the process. We still have troops overseas in harm’s way and he only asks that you direct your support to those troops.”

Prosecutors had asked the judge for a sentence of two years less a day, plus a disgraceful dismissal; defence lawyers wanted a demotion and a stern letter of reprimand. Lt.-Col. Bruce MacGregor, director of military justice policy in the office of the Judge-Advocate General, said the military is satisfied with the court’s middle ground. “The military judge sent a message that discipline is the heart of leadership within the Canadian Forces,” he told reporters. “If we act outside of the rule of law as Canadian Forces members, we will have to take responsibility for it.”

Both sides have thirty days to appeal the sentence.