Evan Solomon says his art business wasn't a conflict with his journalism. But that 'double-dipping' was a clear violation, say experts 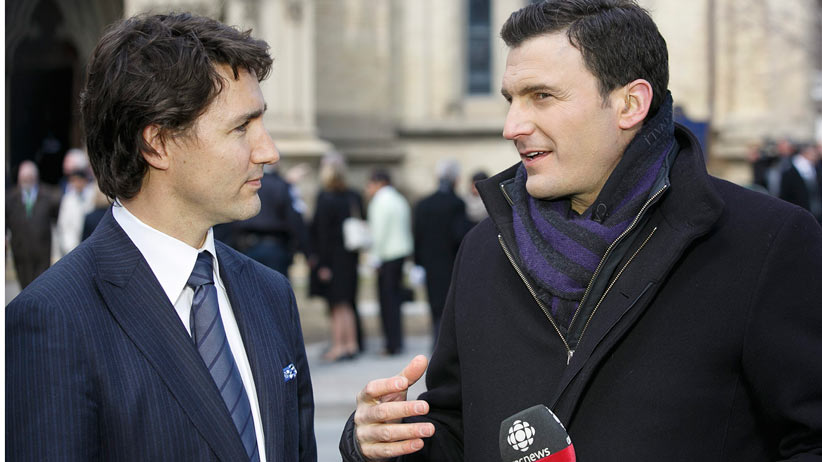 Liberal Leader Justin Trudeau and Evan Solomon at the state funeral for Jim Flaherty at the Cathedral Church of St. James in Toronto on April 16, 2014 (Michael Hudson/CP)

Evan Solomon is the latest tall poppy to be lopped off at Canada’s public broadcaster, following allegations he used his position as a TV host to broker lucrative art deals.

That has journalism ethics experts shaking their heads.

Solomon was let go after a Toronto Star investigation revealed he’d brokered the sale of artworks between collector Bruce Bailey and such powerful figures as former Bank of Canada governor Mark Carney and Research in Motion (now BlackBerry) co-founder Jim Balsillie. In a written apology on Tuesday night, Solomon said he did not consider his art business a conflict with his journalism. He told the Star that business ended in 2014.

“Most people understand you need to avoid perceived, as well as real, conflicts of interest,” Waddell said. “Covering your friends, reporting stories that have your friends in them, having business relationships with people you’re covering, are all obvious things you should avoid.”

That’s sometimes easier said than done in Ottawa, where it’s not unusual for members of the press to attend many of the same functions and events as MPs and other elites in the capital. Politicians and journalists appear onstage together at events like the annual Jaimie Anderson Parliamentary Internship fundraiser. Carney and Solomon have been photographed together at events held by the Southam Club, as noted in local society pages and the club’s website.

Solomon is known to have a personal friendship with Carney, now governor of the Bank of England, even posting a photo of the two to Twitter after running the London Marathon this spring.

The CBC has faced increased scrutiny following the criticism that several high-profile hosts, including The National‘s Peter Mansbridge, business reporter Amanda Lang and Cross Country Checkup host Rex Murphy were blurring ethical lines by accepting fees for paid appearances. That prompted the broadcaster to clamp down on paid speeches last year, by updating CBC policy to disallow requests for appearances from groups that seek to influence public policy, according to a blog post from editor-in-chief Jennifer McGuire last year.

In a memo to staff on Wednesday afternoon, McGuire said CBC was assured by Solomon in April that his art business did not conflict with CBC News. She wrote that, on Monday, the Toronto Star approached CBC with information that, if true, “significantly changed our understanding of the situation.”

“Based upon information from our own review, it was determined that Evan’s activities were inconsistent with our conflict-of-interest and ethics policies, as well as our journalistic standards and practices.”

On Tuesday, Solomon was fired.

In her memo, McGuire said that “any ethical lapse reflects badly on the entire profession.”

It’s true that not only CBC journalists have been accused of misconduct. Global News anchor Leslie Roberts resigned earlier this year after it was revealed that guests who had appeared on Global programs were affiliated with a PR company in which he had a secret stake. And in the U.S., NBC Nightly News anchor Brian Williams was suspended this winter for misleading the public about his experiences covering the war in Iraq in 2003.

But, for a public broadcaster, the problem goes beyond an ethical debate. The scandals can lower audience opinion of the CBC, and the same is true for government, which determines the corporation’s funding, Waddell said.

Journalistic work to make money from people who are sources is a clear violation, Shapiro said, calling it “double-dipping,” adding that a financial relationship taints the work because the journalist is no longer independent.

As to why the claims of ethical breaches have involved mostly broadcast journalists, Shapiro suggested that an insight can be gleaned from Janice Rubin’s investigation into the allegations against former CBC host Jian Ghomeshi, who faces numerous charges related to violence against women. The report referred to “host culture,” which includes the belief that “people who occupy the role of an on-air host inevitably have big personalities, big egos and big demands,” among other things, which may lead them to act with impunity.

“I think there’s some part of the hubris that goes along with celebrity that makes you think, ‘I can just do this,’ ” Shapiro said.