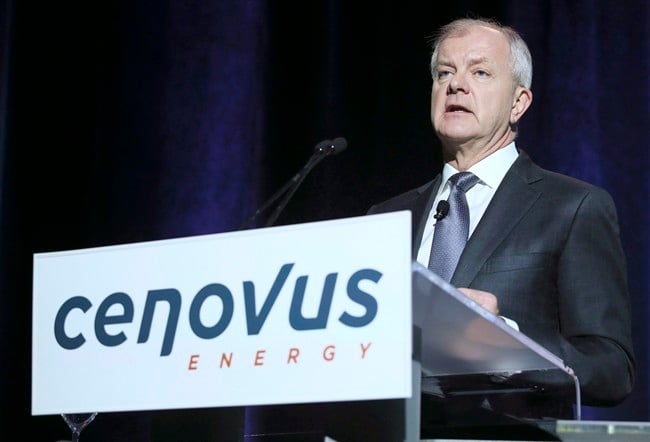 Brian Ferguson, President and CEO of Cenovus Energy, speaks at the company’s annual meeting in Calgary, Wednesday, April 27, 2016. Cenovus Energy says it is planning to boost its 2017 capital spending by 24 per cent and resume work on the expansion of its Christina Lake oil sands project in northeast Alberta. (Mike Ridewood/CP)

CALGARY – Cenovus Energy is going ahead with an expansion of its Christina Lake oilsands project, making it the second oilsands development in as many months to be reactivated after being shelved due to the downturn in oil prices two years ago.

The announcement came as the Calgary-based oil producer said it was planning to invest between $1.2 billion and $1.4 billion next year, up 24 per cent from this year, and increase oil production by about 14 per cent to approximately 230,000 barrels per day.

CEO Brian Ferguson said on a conference call that lower costs are the main reason for the decision to restart the expansion.

“We expect to realize over $500 million in project savings compared with the original budget that we had prior to when we stopped construction in late 2014,” he said.

Cenovus said it anticipates spending an additional $800 million to $900 million to complete the 50,000-barrel-per-day project. That will bring the total capital cost to about $1.1 billion, including about $250 million already invested.

Construction is to be restarted next spring and first oil production is scheduled for the second half of 2019.

Last month, Canadian Natural Resources also cited lower costs as it announced it would resume construction of its Kirby North oilsands project, designed to produce about 40,000 barrels per day.

The Calgary-based company said it had spent about $700 million on the project before it was halted in 2014 and expects to spend $650 million more for a total of $1.35 billion, $100 million less than the original price tag.

Both projects use industry standard steam-assisted gravity drainage or SAGD technology, where steam is injected into a horizontal well to melt the sticky bitumen and allow it to drain into a lower parallel well to be pumped to surface.

Ferguson said Cenovus plans to save money through a host of technical innovations, including fewer but longer horizontal wells, a revamped multiple well pad design and more efficient startup processes.

The revived projects are the latest in a series of positive signs for the Alberta economy.

Also Thursday, the Conference Board of Canada released a forecast calling for the province to emerge from its recession next year with real gross domestic product growth of about 2.2 per cent, thanks to higher oil prices and the rebuilding of fire-ravaged Fort McMurray, the city in the middle of the oilsands.

On Wednesday, Alberta Finance Minister Joe Ceci and a panel of economists meeting in Edmonton agreed the worst is over for the provincial economy.

Nor are oilsands the only bright spot for the oilpatch.

Cenovus also announced Thursday it would spend $160 million next year to drill 50 horizontal oil wells into its Palliser conventional oil block in southern Alberta after halting exploration there two years ago.

On the call, Ferguson said the field is expected to deliver profits for Cenovus at benchmark U.S. oil prices below US$35 per barrel.

On Wednesday, Calgary-based Crescent Point Energy (TSX:CPG), the most active conventional oil producer in Saskatchewan, announced a $1.45-billion capital spending budget for 2017, up 32 per cent from $1.1 billion expected to be spent this year, to grow production by 10 per cent.

Cenovus promised Thursday to update in mid-2017 the status of two other oilsands projects it halted in 2014. It said it would continue planning for both Foster Creek phase H and the first phase of a new SAGD oilsands project called Narrows Lake.

He said the Cenovus and Canadian Natural projects have the advantage of being partly built projects made profitable by costs savings, despite oil prices that haven’t changed much since they were deferred.