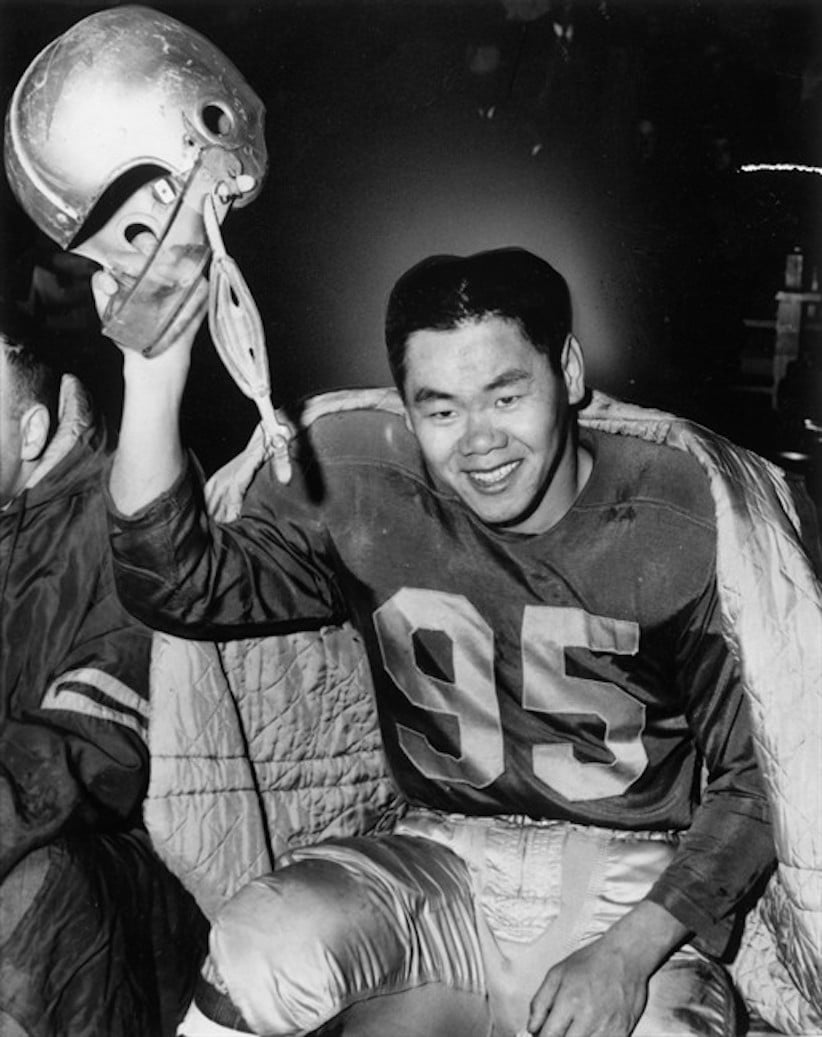 CALGARY – The China Clipper sailed to the rescue of more than one professional sports team — as a bruising football fullback, a tenacious front-office manager in the CFL and part-owner of his home-town hockey squad, the Calgary Flames.

Norman Kwong, who was the first Chinese Canadian to play in the CFL and who later served as Alberta’s lieutenant governor, died Saturday at the age of 86.

“Mr. Kwong was proud to be the son of Chinese immigrants. He was an Alberta success story from an early age. From his storied career in the Canadian Football League to his later co-ownership of the Calgary Flames, he was a champion on the field of play and in life,” Alberta Premier Rachel Notley said in a statement.

“He gave his time generously to non-profit and voluntary organizations across the country. His contributions to public life earned him many honours, including the Order of Canada.”

Prime Minister Justin Trudeau tweeted that Kwong was “a determined trailblazer who made Albertans proud.”

A statement by Kwong’s family said that he died peacefully in his sleep.

Kwong was a personable and good-natured man who regaled banquet crowds with humorous stories about his 13-year football career with the Edmonton Eskimos and Calgary Stampeders. He often jokingly referred to himself as “The Living Legend.”

At 18 with the Stampeders, the Calgary-born Kwong was the youngest player to win the Grey Cup.

Kwong liked to tell the story about how, after he had fumbled the ball on his first carry three games in a row in 1952, his coach taped a football to his arm and made him wear it around for a week.

But under his smiling, easy-going street demeanour, the 5-foot 9, 190-pound Kwong was a unrelenting, ferocious running back.

His 1955 pursuit of the league rushing record exemplified his tenacity.

Trailing Winnipeg’s Gerry James by 149 yards going into the last regular season game of the year, Kwong refused to give up.

The Edmonton Journal’s Jim Brooke would later report on October 31, 1955 that the Eskimos’ 30-5 victory over the hapless Calgary Stampeders “was secondary to the Saga of the China Clipper.”

“An unstoppable human battering ram named Normie Kwong rewrote the record book at Clarke Stadium Saturday night, his flying cleats stamped the exclamation points of greatness across the hallowed pages reserved for deeds of a select few,” gushed Brooke. “Only a super-human effort could guarantee success in the face of such odds. That effort was forthcoming.

“Behind the inspired blocking of his teammates, Kwong was a crashing, relentless force that would not be denied.”

Number 95 rushed for 192 yards that day, smashing the record for yards in a single game, most carries in a season and most rushing attempts in a single game. He set the new season rushing mark at 1,250 yards.

The China Clipper continued his heroics in the 1955 Grey Cup against the Montreal Alouettes in Vancouver, setting records with his 30 carries and 145 yards rushing.

The Eskimos, with Kwong and Johnny Bright as their turf-pounding running back tandem and Jackie Parker and later, former Alberta Premier Don Getty, at quarterback, won that Grey Cup. They added another the next year to string together three in a row between 1954 and 1956.

When Kwong retired from playing football in 1960, he held 30 CFL records and two Schenley Awards as the league’s outstanding Canadian.

He was voted Canada’s athlete of the year in 1955, beating out teammate Jackie Parker and hockey legend Rocket Richard on a list of Canadian heroes that now includes such greats as Wayne Gretzky and Gordie Howe.

He rushed for 9,022 yards in his career, the third-highest total in CFL history, won four Grey Cups and gained 1,000 yards a season five times. He was selected all-Canadian five times and voted to the Canadian Football Hall of Fame in 1969.

His 192 yards rushing in a single game for Edmonton stood for 45 years until it was broken by Sean Millington in 1999.

“How many Canadians are able to earn a place in our record books, history books and in our hearts? The Honorable Normie Kwong did,” CFL commissioner Jeffrey Orridge tweeted on Saturday.

After retiring as a player in 1960, Kwong gained weight but still kept the squat, muscular look of his playing days. He established a successful career in real estate and became part-owner and director of the National Hockey League’s Calgary Flames until he sold his interest in 1994.

In 1988 Kwong became president and general manager of his former football squad, the Stampeders. Many credited him with turning around the fortunes of the near-bankrupt franchise at the gate and on the field.

He stepped down four years later but continued to be active in the community, serving as national chairman of the Canadian Consultative Council on Multiculturalism and as honorary chairman of Calgary’s Easter Seal Campaign.

Both the Eskimos and the Stampeders issued statements of condolences.

Former Stampeders coach Wally Buono, who was hired during Kwong’s tenure with the team’s management and who is now head coach and general manager of the BC Lions, called Kwong a tremendous mentor and leader.

“We have lost a legend, but we are better for having had the opportunity to have him part of our CFL family,” Buono said in a statement.

Kwong was appointed lieutenant governor of Alberta in 2005 and served until 2010.

“He brought an effortless dignity and warm humanity to his vice-regal duties,” Notley said.

He is survived by his wife Mary, four sons and 10 grandchildren.

The Alberta government said there will be a private funeral followed by a public state memorial in Calgary on Sept. 13.

It said condolence books will also be available for the public to sign at the legislature in Edmonton, as well as at the McDougall Centre, where the government’s offices are based in Calgary.