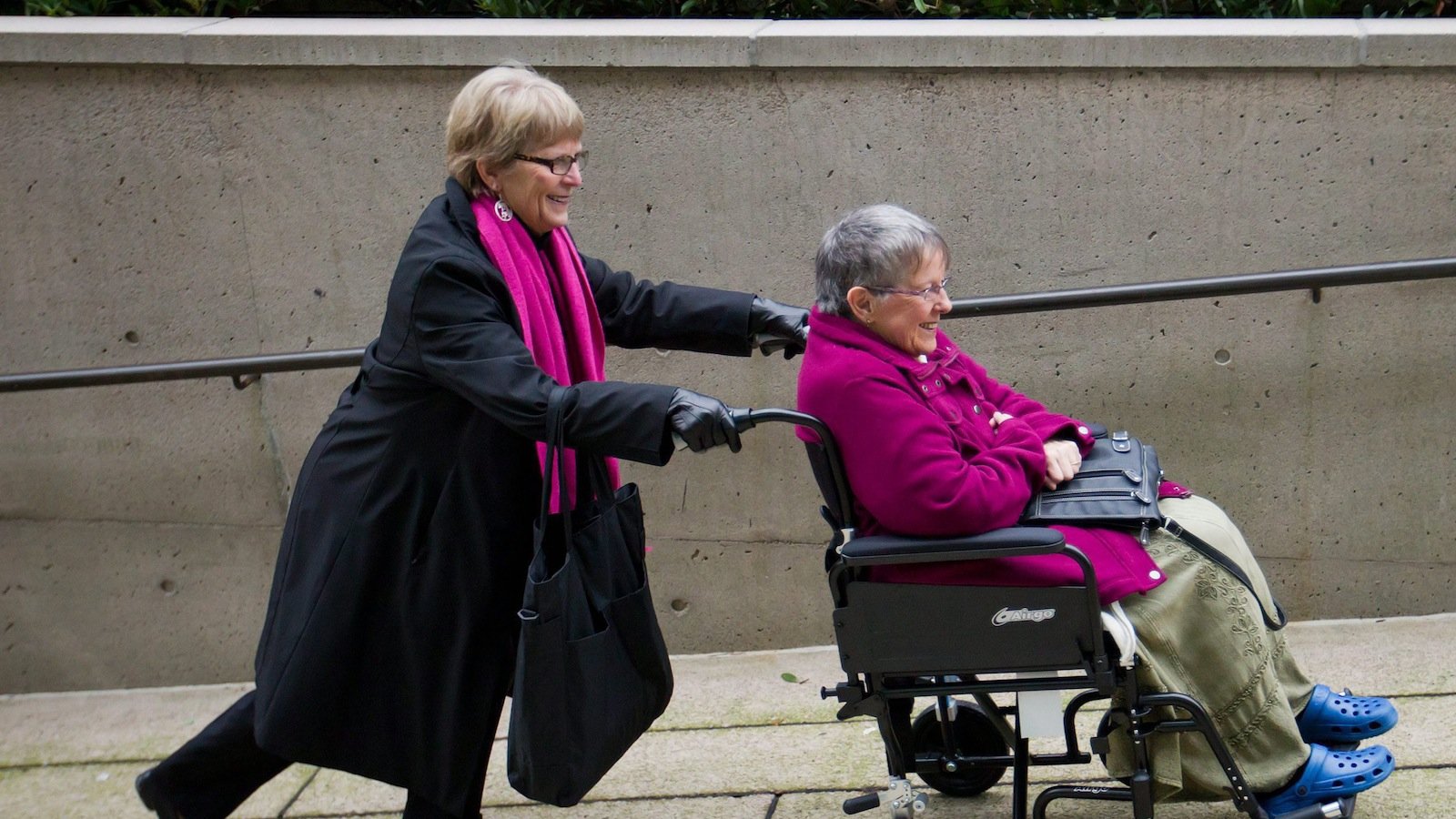 Gloria Taylor, right, is assisted into British Columbia Supreme Court by fellow plaintiff Lee Carter in Vancouver, B.C., on Thursday December 1, 2011. Taylor, who has Lou Gehrig’s disease, is seeking the right to a doctor-assisted suicide in a challenge at B.C. Supreme Court. Darryl Dyck/CP

OTTAWA – A proposed new federal law that imposes strict conditions on the right of Canadians to end their lives with medical assistance is a betrayal of the woman whose case was central to the Supreme Court’s decision to strike down the ban on assisted death, critics say.

Kay Carter would not have qualified for an assisted death under the law proposed Thursday by the Trudeau government in response to the top court’s landmark ruling, said the British Columbia Civil Liberties Association, a plaintiff in the case.

The 89-year-old B.C. woman suffered “excruciating physical and psychological distress” from spinal stenosis, but was not facing imminent death, the BCCLA said.

Under the proposed new law, to be eligible for a medically assisted death, a person must be someone who is “suffering intolerably” and for whom a natural death is “reasonably foreseeable.”

They must also be a consenting adult, at least 18 years old, with a serious and incurable disease, illness or disability, and be in “an advanced state of irreversible decline.”

“It was not reasonably foreseeable that Kay would die a natural death from her underlying disease,” said BCCLA litigation director Grace Pastine.

“We think it’s shameful that the woman who was at the very heart of this litigation would be a person who would not qualify for a compassionate and peaceful death.”

Carter travelled secretly to Switzerland in January 2010, where she was able to legally obtain medical help to end her life.

Her daughter, Lee Carter, who carried on her mother’s fight for the legal right to an assisted death in Canada, agreed that her mother would not have qualified under the new law.

“I feel angry, I feel sad, I’m bitterly disappointed,” she said in an interview.

“It’s like we’ve gone through this for five years — and for what?”

The “foreseeable death” provision shocked those who had claimed victory last year when the Supreme Court struck down the ban on assisted death as a violation of the right to life, liberty and security of the person.

“This is a way of saying (the disease must be) terminal without saying terminal,” said Shanaaz Gokool, head of Dying with Dignity Canada.

That, she said, blatantly disregards the court’s ruling that a new law must recognize the right to a medically assisted death for a clearly consenting adult who has a “grievous and irremediable medical condition” that “causes enduring suffering that is intolerable to the individual in the circumstances of his or her condition.”

The court did not specify that the illness must be terminal or that the individual must be at death’s door; it said only that the incurable condition must be intolerable to the individual. Nor did the court confine its ruling to those suffering physical illnesses.

The proposed law does not apply to those suffering only from mental illnesses, or to so-called mature minors who may otherwise meet all the criteria except for age. Nor does it allow those with competence-eroding conditions, such as dementia, to make requests in advance for medical assistance to die at a certain point in the progression of their disease.

Justice Minister Jody Wilson-Raybould said those controversial, complex issues require further study which the government — under pressure to meet the court’s June 6 deadline for enacting a new law — didn’t have time to do.

Others say those omissions, along with the foreseeable death provision, virtually guarantee the new law will be challenged and, eventually, struck down.

“This legislation would not withstand a charter challenge by a competent, not terminally ill patient who suffers an irreversible medical condition that renders their life not worth living.”

A number of groups have called on the government to refer the law, once passed, to the Supreme Court to test whether it is actually in compliance with the charter of rights — rather than forcing sick and dying individuals to launch their own court challenges. But Wilson-Raybould said it’s “definitely too early to speculate” on that.

In any event, she maintained the proposed law is compliant with the court’s ruling and respects the charter, although she and Health Minister Jane Philpott both seemed to acknowledge the inevitability of a court challenge.

“For some, medical assistance in dying will be troubling. For others, this legislation will not go far enough,” said Wilson-Raybould.

“We believe that this legislation is the best approach to ensure that dying patients who are suffering unbearable pain have the choice of a peaceful death and that the vulnerable are protected.”

The proposed law also flies in the face of recommendations from a special joint parliamentary committee which urged the government to take a much more permissive approach.

But in the House of Commons, Conservative MPs, who had strenuously objected to the committee’s majority report, claimed victory.

“In the delicate issue of medical aid for dying, we note the government has agreed with the Conservatives’ dissenting report, because they don’t touch minors or people who suffer from mental illness,” said Gerard Deltell.

The Canadian Medical Association lauded the bill as “both thoughtful and comprehensive” and the Canadian Association for Community Living, which advocates for the disabled, expressed relief that the bill recognizes the need for “robust protections” for vulnerable people.

However, Canadian Physicians for Life said the government still hasn’t done enough to avoid potential abuses or to ensure that medical practitioners are not forced to provide assistance in dying even if it violates their personal beliefs.

Op-Ed: The intersection of freedom of conscience and right to death

To obtain a medically assisted death, the bill requires a patient, or designated person, to submit a written request, which would need to be signed by two independent witnesses. Two independent physicians or authorized nurse practitioners would have to evaluate it and there would be a mandatory 15-day waiting period unless death or loss of capacity to consent was imminent.

It does not compel anyone to provide assistance in dying; nor does it require conscientious objectors to refer patients to a medical practitioner who will help them die. Philpott said the federal government will work with provinces to connect patients with doctors or nurse practitioners who are willing.