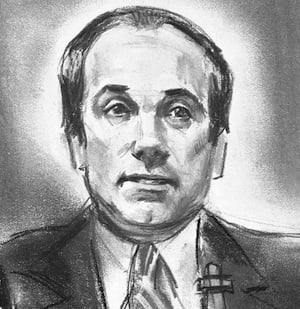 It’s impossible not to listen to Joe Pistone. From the moment he took the stand today at the so-called Charbonneau commission, the man better known as Donnie Brasco waxed nostalgic about the days where he stuck a stake in the heart of the American Mafia. Pistone, you’ll recall, was an FBI agent who between 1973 and 1981 masqueraded as a jewel thief in New York and ingratiated himself with what was then one of the biggest crime syndicates in North America. It is an incredible story, one committed to celluloid by the likes of Johnny Depp in 1997’s Donnie Brasco, and the simple act of hearing him spill what he has already written about in numerous books and one screenplay—in Montreal, behind an identity-shielding barrier, in his Jersey-inflected English—was something to behold.

The question is: beyond the obvious pomp and star power, what does Donnie Brasco’s life story bring to Quebec’s hearings on corruption in its construction industry? After all, impressive as it is, Pistone is an American who investigated an American phenomenon for an American law enforcement agency. He didn’t need to know anything about the Canadian mafia equation—if only because he had other things to worry about, like keeping himself among the living. Montreal’s Rizzuto Clan gets no more than a walk-on role in Donnie Brasco: Unfinished Business, Pistone’s third book. This, even though Brasco was undercover when the once-formidable Rizzuto Clan was at its height, and was a major source of drugs (mostly heroin) for New York City.

The answer—not much other than pomp and star power—is mitigated by the size and breadth of the commission’s mandate. As last week’s testimony showed, the first chunk of this fall’s hearings aren’t necessarily related to the goings on of organized crime within Quebec’s borders. If anything, the testimony of York Region Police detective Mike Amato and Valentina Tenti last week showed how few places in the western world are safe from the mafia’s reach. In this context, Pistone’s testimony was like watching A rerun of The Sopranos on A&E: a guilty pleasure that was at least a little bit informative to the conversation at hand.

Pistone came into the mafia world as Donnie Brasco in 1973 and spent six months hanging around mafia-associated clubs, bars and restaurants before a connected bartender introduced him to associates and hangers-on of the Colombo family. He eventually moved to the Bonannos. Brasco’s backstory, “the legend,” as Pistone put it today, was as a jewel thief. It was a perfect gig for the FBI agent who was bound by the law not to kill anyone. “Jewel thieves aren’t violent by nature, and they operate alone so there was no need for a gang,” Pistone said. Nonetheless, as Pistone admits in Unfinished Business, he participated in “burglaries, armed robbery, high jacking, felony assault and beatings.”

Pistone’s handlers shut down the Donnie Brasco operation in the summer of 1981, mere weeks before Pistone was going to be “made.” Peeved that his bosses yanked him before he could become a full-fledged member of the Mafia, Pistone still had one hell of a consolation prize: over 200 convictions resulted from his testifying in roughly 20 trials. Then there was the immediate, more visceral damage. “They killed Sonny Black, they killed Tony Mirra, they killed [former Mafia associate] Gilly,” Pistone said. “Lefty Ruggiero”—Brasco’s mentor and the Al Pacino to Pistone’s Johnny Depp—“was on his way to get killed, but the FBI heard on wiretaps, and snatched him up before.”

A footnote to his legacy: not long before he left Donnie Brasco behind, Pistone heard that “we were bringing in a shooter from Montreal” to take care of some problems. He only learned later that the shooter in question was none other than Vito Rizzuto, one of the co-conspirators in the murder of Philip Giaccone, Dominick Trinchera and Alphonse Indelicato. Rizzuto was convicted of these murders in 2004, and is set to be released in October. Since he’s been in jail his father, son and brother-in-law have all been killed. The Rizzuto clan has virtually collapsed since Vito went to jail, and much of its traditional sources of revenue—the drug trade, the construction industry among them—are controlled in large part by biker and street gangs. The mafia, in Montreal at least, is a hurting, humbled beast these day.

But it isn’t out. “The link between Montreal and New York City is still active,” Pistone said, noting how a significant portion of New York’s drugs come from “up there.” At the same time, the Mafia has donned a white collar and delved into “legitimate” (read: non-blood soaked) enterprises like phone card scams and stock market manipulation, if only because “there is so much more money in white-collar criminal activities.”

Whether Quebec unions have gone the way of certain members of their American cousins isn’t exactly clear. After all, Quebec’s many union federations were amongst the loudest clamouring for an inquiry into the construction industry. Yet Pistone’s testimony comes roughly a week following a front page Journal de Montréal story detailing how Yves Mercure, the former head of FTQ-Construction, the province’s biggest construction union, spoke openly (and, unfortunately for him, while being recorded) of how the FTQ-Construction could help convince companies to hire more of its workers over those affiliated with rival International. It was right around this time that someone set Mercure’s pickup truck on fire in the driveway of his suburban home.

It’s old school, brass knuckles kind of stuff that is as much a throwback to the dirty old days as Pistone himself. And maybe that’s another good reason to have him testify; he’s a living reminder of how bad things remain here.