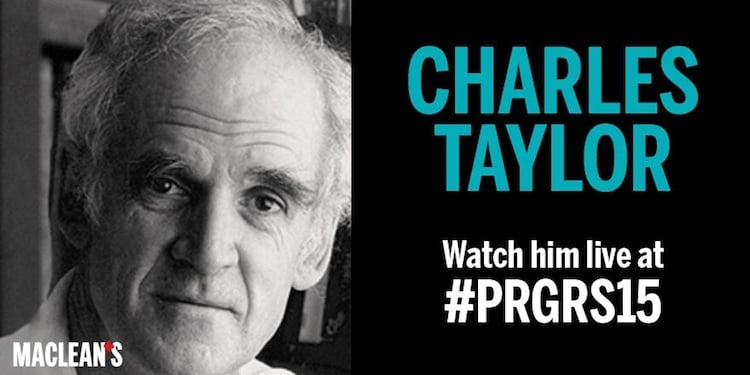 OTTAWA – Prime Minister Stephen Harper was accused Saturday of playing into the hands of terrorist recruiters with inflammatory comments about the face-covering veil worn by some Muslim women.

The accusation came from renowned philosopher Charles Taylor, who co-chaired Quebec’s 2007 commission on reasonable accommodation of cultural and religious minorities.

“Ask yourself what are the recruiters for Islamic State saying? They’re saying (to Muslims), ‘Look, they despise you, they think that you’re foreign, you’re dangerous, you’re not accepted here, so why don’t you come with us?'” Taylor said following a speech to the annual summit of the Broadbent Institute, a social democratic think-thank.

“The more you make it sound like that (is true), the more you’re helping them. And it’s strange that people don’t see this.”

Harper has said it’s “offensive” for women to wear the face-covering niqab when taking the oath of citizenship. And he’s called the niqab the product of an “anti-women” culture.

Last week, Conservative backbencher Larry Miller was forced to apologize after saying women who insist on wearing a veil during the citizenship ceremony should “stay the hell where they came from.” Harper’s office called the comment “inappropriate” but the prime minister himself has not weighed in.

Opinion polls suggest a majority of Canadians agree with Harper, a development Taylor called “a ridiculously disproportionate reaction” to the “tiny” number of women who wear the niqab in Canada.

Related post: Justin Trudeau on liberty and the niqab

Nevertheless, he said the reaction is understandable given the furor over Islamic terrorism.

“We’re in a context where Islamaphobia is very powerful in the West,” he said.

“It’s perfectly understandable emotionally. We have to get over it and the worst and the last thing we need is for our political leaders to surf on it and encourage it.”

Taylor said Harper seems “tone deaf” to the dangerous impact his rhetoric can have, although he said it also seems to be a deliberate tactic to whip up support in the run-up to the next federal election, scheduled for October.

He called on all political leaders to show restraint, even if it costs them votes, rather than risk “terrible damage” to Canadian society.

Liberal Leader Justin Trudeau has been criticized by Conservatives, NDP Leader Tom Mulcair and two prominent Jewish groups for suggesting that Harper is employing the kind of rhetoric that historically triggered some of Canada’s most shameful episodes of bigotry, including the “none is too many” approach to Jewish refugees fleeing Nazi Germany in the 1930s and 40s.

But Taylor said the stereotyping and stigmatization of Muslims today is “sociologically very, very similar” to that faced by Jews in the past.

“This kind of scapegoating, alas, we see this throughout human history … We’ve got to fight it wherever it comes up, no quarter. This is something we can give not an inch to, not a centimetre to.”

Related posts: Follow this link for more coverage from the Progress Summit