Proving his worth as Diefenbaker's son 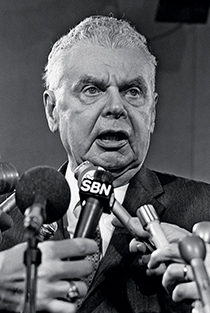 A lot of people laughed. Internet trolls, talk-show callers, the self-appointed guardians of a dead prime minister’s reputation—they’ve all had their cracks over the past year at George Dryden and his claim that he’s the unacknowledged son of John Diefenbaker. Les MacPherson, a former newspaper editor from the Chief’s old riding of Prince Albert, Sask., admitted in an op-ed piece that Dryden looks like Canada’s 13th prime minister. “But so does my brother’s bloodhound, Beau,” he wrote. “It’s possible that the Dryden family’s milkman in 1968 looked like Diefenbaker, too, but that doesn’t mean they were related.”

The barbs could sting, the 43-year-old Dryden admits. “More than anything, it made me angry,” he says. But they failed to divert him from his mission, and this week the yuks are all his. On Aug. 28, Dryden emerged relieved and triumphant from the offices of a Toronto firm that had compared his genetic profile and that of an unidentified member of Diefenbaker’s extended family. The finding? Clear indications of common ancestry, typical of far-flung branches of the same family. “There is a familial linkage,” Harvey Tenenbaum, director of operations for Accu-Metrics, the nationally accredited company that performed the analysis, told Maclean’s. “I can’t say what it is, but it’s more than just strangers passing in the street.”

Tenenbaum cautions against leaping to conclusions. “They could be fifth cousins,” he said. “It’s impossible to pin down.” But to Dryden the results represent an enormous step forward. Stymied, stalled and plain unlucky in his attempts to obtain usable DNA samples of Diefenbaker himself, the Torontonian was running out of clues to justify his mission. Diefenbaker has no known direct descendents with whom to compare genes, and a previous test of cells gathered from personal articles that once belonged to the former PM, now stored at the Diefenbaker Canada Centre in Saskatoon, was inconclusive. He did test negative last winter against a sample of male DNA gleaned from the handle of a clothes brush. But the brush appeared to have been used by more than one person. No one could be sure whether the DNA tested was Diefenbaker’s.

Now his cause has gained new life. The sample analyzed by Tenenbaum came from a Q-tip discarded by a male member of the “Diefenbachers”—a branch of the same family that emigrated to southwestern Ontario from Baden, Germany, in the early 1800s, before Diefenbaker’s father, William, took his family west in 1903. With the help of a professional genealogist, Dryden tracked down more than a dozen members of the eastern branch in the Kitchener-Waterloo area of Ontario, only to meet polite refusals when he asked them for DNA samples. At that point, he turned to Al Duncan, a retired detective with the Toronto police internal affairs unit, who now runs a private investigation firm.

Duncan wouldn’t say which member of the Diefenbachers used the Q-tip. Or how his investigators obtained it. But he did tell Maclean’s that his firm, Toronto P.I., is well-practised in identifying and gathering court-worthy evidence for paternity cases, or to help adoptees find their biological parents. “Our investigators typically watch to see the person discard something we can get a sample from,” he explained. “We seize it, we bag it, we initial it, we photograph it, we seal it up with tamper-proof tape. We maintain control of it at all times, and we take it directly to the lab ourselves.”

The question now is how much weight to attach to the findings. Genetic commonalities between relative strangers is not unheard of, says Tenenbaum; it’s possible the link between Dryden’s ancestors and the man from whom the sample was obtained has nothing to do with John Diefenbaker. The Drydens and the Diefenbakers, after all, lived in the same region of the country for more than a century.

Dryden, however, believes the most likely explanation is the one he’s unearthed over the past two years—a tale shot through with political intrigue and personal strife. In the late 1950s, his mother, Mary Lou, first crossed paths with Diefenbaker in her work as a Progressive Conservative youth leader, singing Tory fight songs at campaign rallies while the PM looked on with open admiration. Her true-blue Tory family was shocked in 1967 when she defied tribal loyalties and married Gordon Dryden, a high-ranking Liberal who for 18 years served as his party’s national treasurer. John George Dryden was conceived 3½ months after the wedding.

George, however, grew up feeling like an outsider in his own family—disaffection that in his adulthood devolved into hostility. In late 2004, he sued Gordon, claiming that the elder Dryden connived to cut him out of an inheritance from the estate of Mary Lou’s brother, William Lonergan. He wound up settling for $75,000, barely enough to cover his legal costs. Then, in late 2010, a bombshell: a nephew of Mary Lou confided to George that the family had long suspected that Gordon was not his biological father. George sued again, demanding a DNA test, which proved his cousin was right.

The result did little to bolster George’s legal fortunes. In December, an Ontario Superior Court judge ruled his family’s decision to keep his lineage a secret does not give him the right to sue. He launched an appeal, then abandoned it while redoubling his efforts to determine parentage. The one person who could tell him, alas, is either unwilling or unable to do so. Frail with dementia and living in a long-term care facility, 78-year-old Mary Lou Dryden has handed power-of-attorney over to Gordon Dryden, who has ordered staff to keep George away on the grounds that he might upset her.

If George remains fixated on Diefenbaker, it’s because the only available clues as to his parentage point to the quixotic politician from Saskatchewan. His mother was open about her admiration for Diefenbaker. Rumours abounded that they’d had an affair. “My cousins used to tease me, calling me John Diefenbaker II,” he recalls. “I guess they’d go home and my mom’s sisters would be talking about this stuff.” He also vividly recalls meeting the former prime minister during the Queen’s Silver Jubilee celebrations on Parliament Hill in October 1977. His mother—a loyal monarchist—had brought him along for the event, and spotted Diefenbaker in a VIP grandstand. “Diefenbaker sees her, stands up, leans over the railing as we get there and gives her a kiss and a hug,” Dryden says. “The two of them are talking and me—a nine-year-old boy—I’m just standing there. All of a sudden, he looks down at me and says, ‘You know, you were named for me.’ ”

Anyone who doubts his accounts should now consider the most recent DNA results, Dryden adds: if he were not the Chief’s son, the tests would be much more likely to come back negative. “The chances of the two families intermingling in any other way is very remote. As far as I’m concerned, this proves it. I’m John Diefenbaker’s son. I don’t know that there’s a whole lot more that I can do.”

Indeed, he’s financially tapped out. Over the past 18 months, he’s spent at least $60,000 on his search for proof, from the lab costs of DNA examiners to fees paid to private investigators. Moreover, the prospective sources of DNA related to Diefenbaker are running low. Last week, the Diefenbaker Centre announced it had discovered hair cuttings thought to have been clipped from the former prime minister when he was a child. But the hairs, Dryden has been told, do not have the root cells analysts need to obtain a DNA sample.

There are more remote possibilities. Artifacts belonging to Diefenbaker that lie undiscovered in attics or basements. New methods of examining hats, pipes and hairbrushes. In the meantime, Dryden moves on, armed with enough evidence to silence the smart alecks. After four decades of deception and prevarication as to his lineage, the joke is finally no longer on him.