Ches Crosbie to run for Conservatives in Newfoundland

'He's observed everything there is to observe and he knows that politics is a very risky business,' John Crosbie says of his son 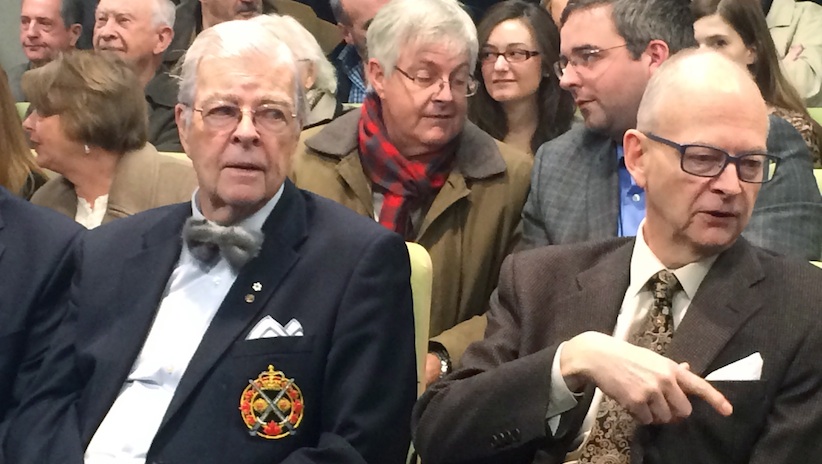 John Crosbie, left, with his son, Ches. (The Canadian Press)

But he comes from a distinguished line of Newfoundland politicians and hopes after a successful law career to continue that tradition as a Conservative MP.

The personal injury specialist announced Thursday he’ll seek the Conservative nomination in the riding of Avalon.

Politics runs through his veins. As the son of a man who served as the province’s lieutenant-governor and in the cabinets of former prime ministers Joe Clark and Brian Mulroney, he absorbed the rewards and pitfalls of public life.

“I grew up in a political family,” Ches Crosbie said after announcing his plans at an event in Conception Bay South, near St. John’s.

As a lawyer he used no-win, no-pay contingency financing to give scores of plaintiffs access to justice, he said.

Now he said he wants “to give people the power to make great decisions about the kind of province and country they want to live in and, especially, they want their children to live in.”

The senior Crosbie would become one of the most vocal proponents of the Canada-U.S. Free Trade Agreement while serving under Mulroney. He spent 17 years as a federal politician before retiring in 1993.

He is also widely credited with fighting for the crucial backing in Ottawa that launched Newfoundland’s first offshore oil development.

More than 20 years after his father’s retirement, Ches Crosbie wants to write his own political success story.

His father said there are no guarantees. “He’s observed everything there is to observe and he knows that politics is a very risky business,” John Crosbie said. “If he doesn’t know that, he’d be stupid. And he isn’t stupid. Nothing is ever certain in politics.”

The riding of Avalon has been held by Scott Andrews since 2008.

Andrews was suspended from the Liberal caucus in November over alleged personal misconduct though he has denied any wrongdoing. He has said he plans to run again in an election expected next year.

Ches Crosbie, 61, said Avalon presents the best chance for a Conservative win in a province that has no MP in the Stephen Harper government.

That’s mainly due to boundary changes that could boost support, he said. Crosbie said he decided before Andrews was suspended to seek the nomination and is not trying to “capitalize” on his troubles.

Peter Penashue was the sole Conservative elected in 2011. He stepped down last year over illegitimate campaign expenses to win back the trust of Labrador voters in a byelection that he lost to the Liberal candidate.

Ches Crosbie said Thursday times have changed since former premier Danny Williams launched his Anything But Conservative campaign over equalization payments and oil royalties in 2008.

Crosbie said he believes Harper will likely win the next election.

“If we think that it benefits this province to have the ear of the prime minister … to have a voice in the highest political office in the land, then we must elect Conservative party members of Parliament in 2015.”

He will likely have to fight for the nomination. Former provincial cabinet minister John Ottenheimer, who ran a close second for the provincial Progressive Conservative party leadership in September, is widely expected to challenge Crosbie.

Ches Crosbie is a former Rhodes scholar who graduated from Dalhousie University’s law school in Halifax before joining the Newfoundland and Labrador bar in 1983. He formed his own law firm in 1991.

Crosbie’s grandfather, Chesley Crosbie, was a prominent St. John’s businessman and politician who took over enterprises founded by his father, Sir John Chalker Crosbie. They included hotels, shipping, manufacturing and fish export interests across the province.

Chesley Crosbie in 1948 formed the Party for Economic Union with the United States to promote free trade with America instead of a union with Canada. Newfoundland joined Confederation the following year.