Chief Isadore Day on why ending the boil-water advisories affecting 93 First Nations communities is critical, achievable and a human right 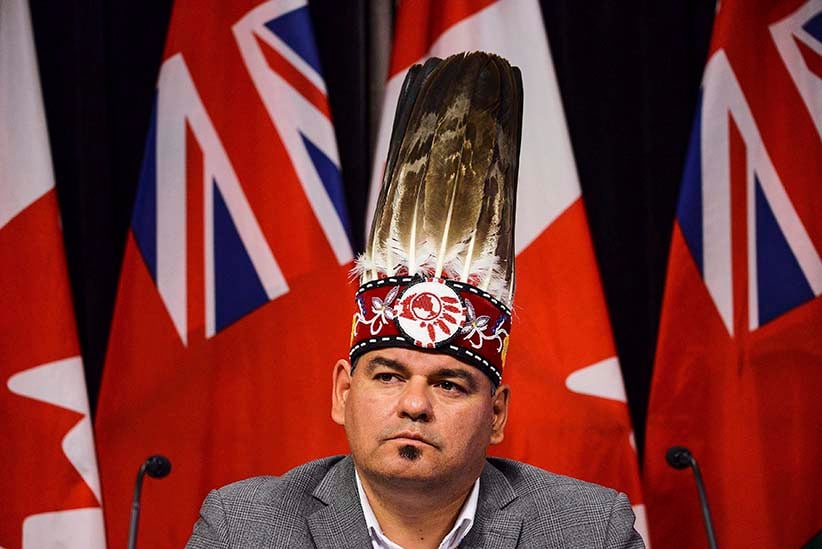 Isadore Day, Wiindawtegowinini is the newly elected regional chief of Ontario for the Assembly of First Nations. He was Chief of Serpent River First Nation, from 2005 to 2015. During that time, he negotiated a new water-treatment plant for his community. Early in the federal election campaign, Day challenged each party to commit to end all boil-water advisories on First Nations reserves within five years. Last week, Liberal Leader Justin Trudeau accepted the challenge. The next day, Maclean’s interviewed a public health researcher specializing in risk assessment, who said the goal may be unrealistic. But Day insists it can be done. Today, there are 133 advisories in place, affecting 93 First Nations communities across Canada.

Q: What are you thoughts on Trudeau’s promise to end boil-water advisories within five years?

A: This is what governments should have done long ago. The reality is that the ongoing problem of contaminated water left unresolved has the potential to cause harm, and, in many cases, death, as we’ve seen in Walkerton in 2007 with the E. coli contamination. I think Mr. Trudeau’s commitment is a responsible step forward.

A: The commitment to do it in five is not unachievable. With something as serious as contaminated water, governments have to be prepared to take a bold step. I’m a bit disappointed by Thomas Mulcair’s commitment in that respect.

Q: What have been the barriers to ensuring that First Nations communities have access to clean drinking water?

A: There is the obvious issue of diversity, that not all issues in First Nations are the same . . . Ultimately, this is going to [come] down to the type of investment made by the federal government.

Q: Is clarity about whose role it is to facilitate water management part of the problem?

Q: Why might a First Nations community be under a boil-water advisory now?

A: It could be an inferior system, or perhaps that community doesn’t have a communal system; they’re all on individual wells, and the source of that water could have high mineral content or undissolved organics. At that point, there is no telling what you’re drinking. Treatability studies are the starting point. The first part of this five-year commitment should be [ensuring] that each community [has] its own distinct study to determine exactly what the needs are, what the characteristics of the issues are, and what the cost of mitigating those issues is.

Q: What are the consequences of boil-water advisories?

A: The first is, obviously, health. We’re hearing about rashes and sores, that [people] are getting sick as a result of ingestion or even because of washing with the water. There is frustration at the community level; First Nations people are watching the rest of society enjoy and take for granted clean water. For First Nations that see developers come into their territory, they’re asking themselves justified questions: Why are we less-than? People leave their communities; they say, “This is no quality of life for me and my family.” If a community doesn’t have potable drinking water, chances are, you’re not going to get economic development coming in. So it really leaves the community at a level of Third World conditions.

Q: Do people have to buy bottled water when their communities are under boil-water advisories?

A: Most do. Where there is obvious outcry, the federal government is having to haul water into communities. It doesn’t make fiscal sense to any government to continue to mitigate the issue by trucking water in that has to be purchased.

Q: What has been your own experience in Serpent River?

A: We have gotten our water from bedrock reservoirs. We’ve had problems with maintaining proper yield for a community of 400 people. We’ve had high mineral content. [We’ve also experienced] the instability of having a number of decentralized communal systems. When we tried to tie all the systems together, it was determined that [there was] potential for one part of the system to contaminate another; or we would have to shut down because the system wasn’t producing water. We would wind up in a boil-water situation. We negotiated for the last decade with the federal government, and we were finally able to build a $12.6-million water-treatment plant that we’ve just commissioned this year.

Q: How has that changed things for the community?

A: We now have one source. We have the latest technology to ensure the water is going to be clean and safe. But we also have some other issues to consider: the cost of maintaining that system, and where is the overarching authority and legislation coming from?

Q: How has it changed things for the families living there?

A: It makes life easier. We no longer have to live under a boil-water advisory. We are going to have a sense of safety and security. We will be able to provide safe drinking water for the people who come into our community, and that could mean economic development.

Q: What’s your hope for the future?

A: In Ontario, we have a number communities that have expressed deep concern that the federal government has taken a step backward under the current Conservative regime. However, if the next federal government is going to make a commitment to work with a five-year benchmark, then that gives us all a target to work toward. I think it is a responsible step forward. It’s a bold step forward. It’s one that creates a level of certainty that we are going to see some action from government.

Q: It couldn’t be a more important issue.

A: This is a complex issue and it has a multi-jurisdictional characteristic to it: First Nations, the provinces and the federal government. As long as you’ve got all the parties working together with the same commitment, this is possible. But it’s going to take investment and political will. There’s no other way around it. Clean drinking water is about the human right to health. All Canadians have that right. So why shouldn’t First Nations have that right?