Paul Wells: There's 'extreme concern' among allies about what China is up to, says Canada's top soldier. 'Is it painful for this country? Yes.' 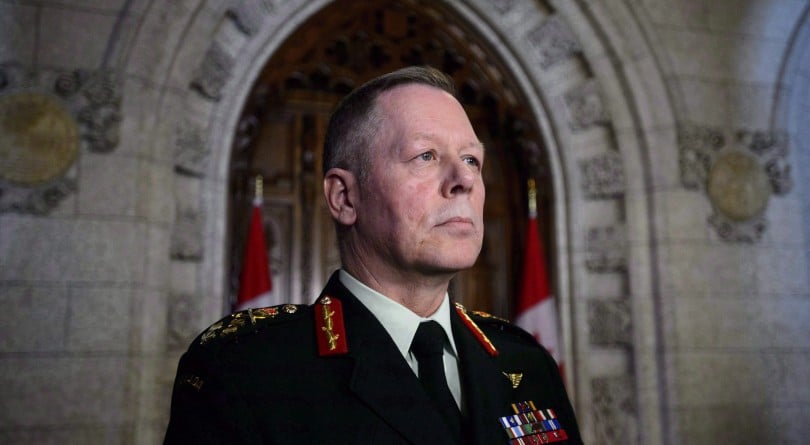 Chief of Defence Staff Jonathan Vance takes part in a press conference in the foyer of the House of Commons on Parliament Hill in Ottawa March 19, 2018. (THE CANADIAN PRESS/Sean Kilpatrick)

“This was an interesting forum,” Gen. Jonathan Vance said as I took a seat in the second-floor suite that had been set aside for him as a meeting room at the Westin Nova Scotian hotel. This was a couple of weeks ago, on the last day of the annual Halifax International Security Forum, a global gathering of soldiers, politicians, diplomats and think tankers, who spend a weekend each autumn discussing what ails the world.

As Canada’s Chief of Defence Staff, the country’s leading soldier, Vance is a Halifax regular. This was the sixth forum he’s attended. But it wasn’t like the others. Much of the discussion this year was about the grim rise, not of stateless and amorphous groups like Al Qaeda or the so-called Islamic State, but of two very familiar country-sized antagonists: Russia and China.

The “number one” trend at this year’s forum was “the resurgence of great-power dynamics,” Vance said.  “There’s extreme concern about what some nations—you know, particularly Russia and China—are doing. The thwarting of international norms and standards that we’ve lived with for a very long time.”

But if the adversaries are familiar, the methods aren’t. “The nature of warfare and conflict is changing. And it’s changing very, very quickly,” Vance said. “Political objectives can be achieved with military force—or with the harmonization of other influencers short of war.”

READ MORE: China is a bigger threat than Russia—but you won’t hear Trudeau say it

As examples, he mentioned the Russian attack on Ukraine—often denied or dissimulated by the Russians—and a range of tactics China is using to destabilize other countries in the Indo-Pacific region. It’s the furthest thing from classical warfare, where armies line up in a field and have at it. It’s… destabilizing. “If you’re fighting below the threshold of war, if you want to punch, where are you going to punch, and with what? That’s the question of our age.”

The Chinese tactics are, if anything, more novel and disturbing than Russia’s. China has spent recent years dumping tonnes of landfill into the South China Sea to build up a string of tiny coral reefs into a network of new and formidable naval military bases. These places used to be meaningless dots in the Indo-Pacific, shipping hazards worst. Now several of them sport two-mile runways, anti-aircraft missiles and other features designed to project the country’s power hundreds of miles further forward. “China is using coercive tactics short of armed conflict,” a 2016 Pentagon report said, “to advance their interests in ways that are calculated to fall below the threshold of provoking conflict,”

The challenge for Canada and its allies, Vance said, “is to define with confidence where does competition stop and conflict start in any domain. It’s pretty clear if you draw a line on a map and they cross it and they’re not supposed to, then it could be an act of war. [But] the line is less certain in the information space, in cyberspace, in the cognitive domain, in monetary terms. You know, destroying your economy—is that an act of war?”

This was all getting pretty abstract. I decided to put a concrete case to Vance. A case from close to home. “Let me just ask out loud what I sometimes wonder,” I said to him. “When I look at the opioid crisis, when I look at the housing market in Vancouver, when I look at money laundering—has Canada been, this year, a target of antagonistic state action by China?”

“I would say we have been for some time,” Vance replied. “I mean, I don’t think it’s just this year.”

“Now, is it antagonistic, deliberately vectored and targeted? I don’t know. But the impact on us is antagonizing, and whether or not it’s deliberately intended that way or if it’s a by-product of something else…” he trailed off.

“Interesting you mention the opioid crisis. So here’s—I’m just giving you a sense of how I see the security domain.” Health Canada reports that between 2016 and 2018, 8,000 people died in Canada of apparently opioid overdoses. “If we had that many people being killed by something somewhere else in the world,” Vance said, “and Canadians were dying at that rate, we would be mustering an awful lot of our resources to deal with it. I think Canada’s trying to deal with it as well as we can. But what’s the nature of that threat? Have we determined that threat to be a by-product of something else, or is it a direct threat?”

By now, Vance’s answer to my deliberately provocative question was getting long, and it wasn’t a No. “Deliberate? Not sure,” he said. “Is it antagonizing? Is it painful for this country? Yes. It’s really not my domain to advise upon, but we’re certainly feeling it.”

In a world where threats are mounting but the nature of conflict is morphing perhaps beyond recognition, Vance said, it does no good to staff up the Canadian Forces with people who share similar experience and ways of thinking. This is his pitch for diversity in soldiers’ background, and especially for recruiting more women into active duty.

“You know, people could accuse me of virtue signalling around diversity,” he said. “It’s got nothing to do with virtue signalling. It has everything to do with, if we aren’t tapping our population into our military with creative, critical thinking and a diverse range of thought and skill sets, we’ll be bringing a tactical tool”—that is, old-fashioned equipment—“to a digital fight. That won’t win.”