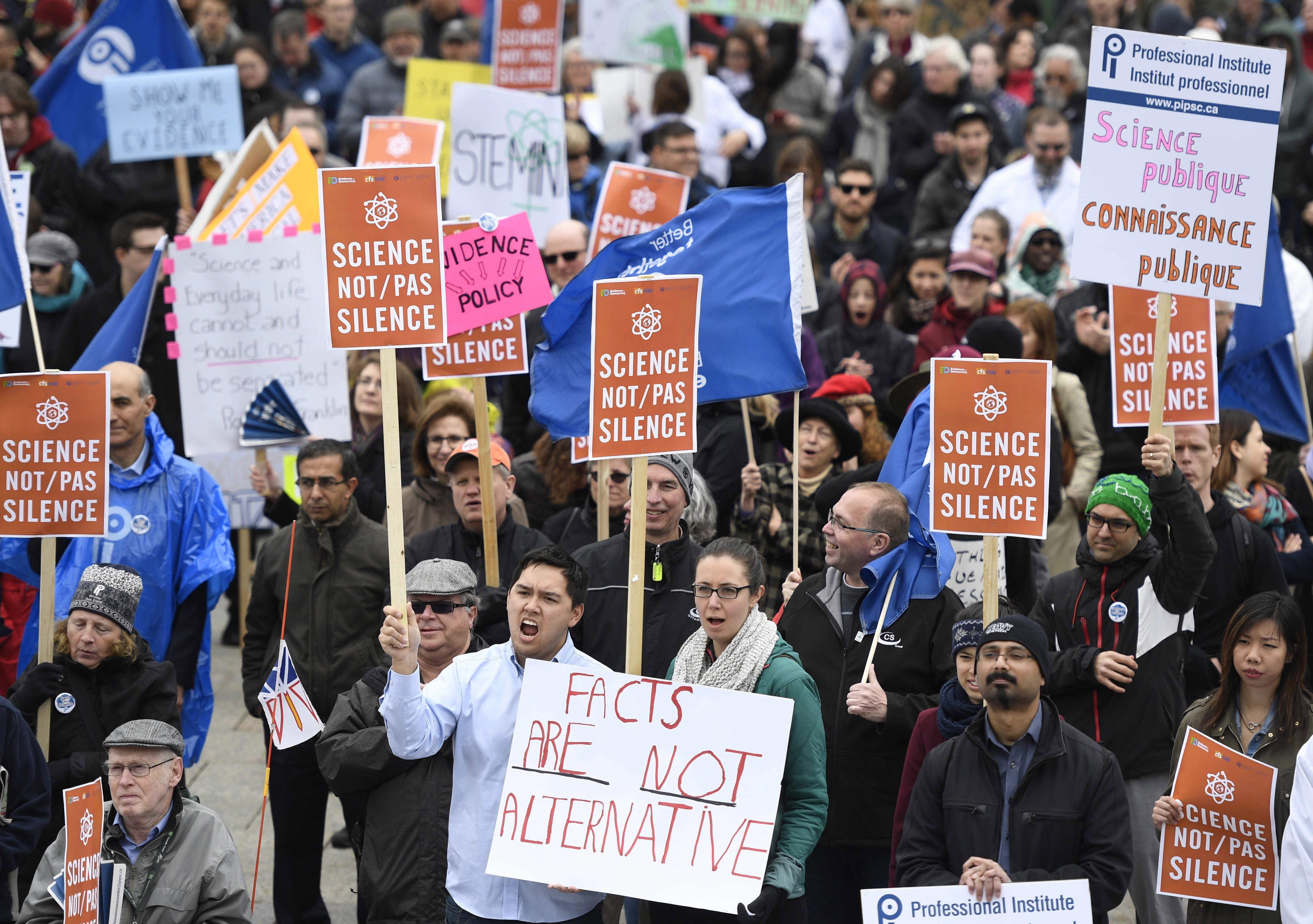 People participate in the March for Science on Parliament Hill in Ottawa, part of a global gathering to promote and advocate for science on Earth Day, Saturday, April 22, 2017. THE CANADIAN PRESS/Justin Tang

Hundreds of scientists gathered on Parliament Hill and in at least 17 other communities across Canada Saturday, rallying in support of their American counterparts who say they’re facing mounting attacks against science.

Science advocate Katie Gibbs said she felt like she was returning a favour. Nearly five years ago, she was in the same place, doing almost the same thing.

In July 2012, she helped organize the “Death of Evidence” rally, protesting cuts to science programs under the former Harper government.

That march paved the way for the advocacy organization that she now heads up, Evidence for Democracy.

The March for Science, which coincides with Earth Day, took place in more than 500 cities around the world — with about 18 scheduled in cities across Canada.

Gibbs said that when Canadian scientists felt threatened, they got a lot of support from their U.S. counterparts.

“I’m not sure if people really know that,” she said. “We worked really closely with the Union of Concerned Scientists in the U.S., for example. They were really supportive of us. So now, it’s our turn to return the favour to them.”

Organizers of the U.S. events portrayed the march as political but not partisan, promoting the understanding of science as well as defending it from various attacks, including proposed U.S. government budget cuts under Trump, such as a 20 per cent slice of the National Institute of Health.

“We’ve been quite successful in getting a lot of science changes happening in government,” Gibbs said. “So what’s happening in the States right now echoes where we were five years ago.”

“It sort of feels like, ‘Oh, do we really have to keep fighting this?'” she added.

In Halifax, protesters turned up near city hall to show their support for evidence-based policy-making, some carrying signs like “Defiance for Science,” and “Without Science, It’s Just Fiction.”

Richard Zurawski, a meteorologist-turned-city-councillor who helped organize the event, said it is imperative that politicians combat the creeping influence of pseudo-science at all levels of government.

“If we don’t support our science, we’re going to lose it,” he said. “Everywhere you look, we’re balancing climate change against the economy, which is just nonsense … The environment is way too important.”

In Ottawa, Gibbs warned that, in spite of progress under Prime Minister Justin Trudeau’s administration, Canadians aren’t entirely out of the woods yet. She said American scientists faced similar issues under George W. Bush, but thought they were in the clear when Barack Obama took office.

“For me, it’s really been that reminder that it’s not enough to have a government today that’s for science,” she said. “We’re really focused on trying to get as much safeguarded as we can. So, to actually try and get protections for scientists legislated.”

—With files from Adina Bresge in Halifax and The Associated Press.

FILED UNDER: march for science