As Toronto approaches the one-year anniversary of Ford’s election victory, CityNews wants to know what year 2 should look like 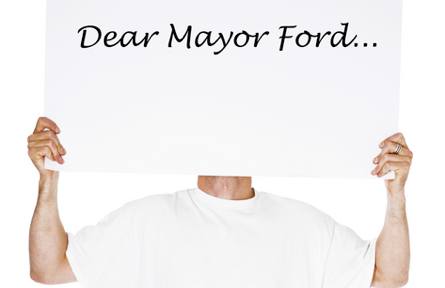 What a wild first year it’s been under Mayor Rob Ford.

Not since amalgamation have municipal politics been so front and centre in Toronto, with headlines almost too numerous to count—from the killing of Transit City to all-night public meetings to the controversial KPMG Core Services review to Ford’s famous “stop the gravy train” mantra.

As Toronto approaches the one-year anniversary of Ford’s election victory—Oct. 25, 2011—CityNews want to know what messages you have for the mayor heading into year No. 2.

1. Similar to the example above, take a photo of yourself holding up a sign with a message for Rob Ford. (If you want, you can also send us a bite-sized video clip with your message).

2. Send it to CityNews via our “Submit Your Stories” tool on the right side of this page or email it to them at torontoweb@citynews.ca.

3. On Oct. 25, they’ll assemble as many as they can into a photo gallery for CityNews.ca, CityNews Channel and CityNews programs on Citytv.

4. Of course, they’ll also pass along the link to the mayor’s office.

Here are the rules:

So get creative—and tell your friends; the more submissions the better.

Deadline for submitting your photo or video is noon on Oct. 25.