‘We sold everything from medicine to men’s boots'

Clara Auckland on life in Ontario in the early 1900s 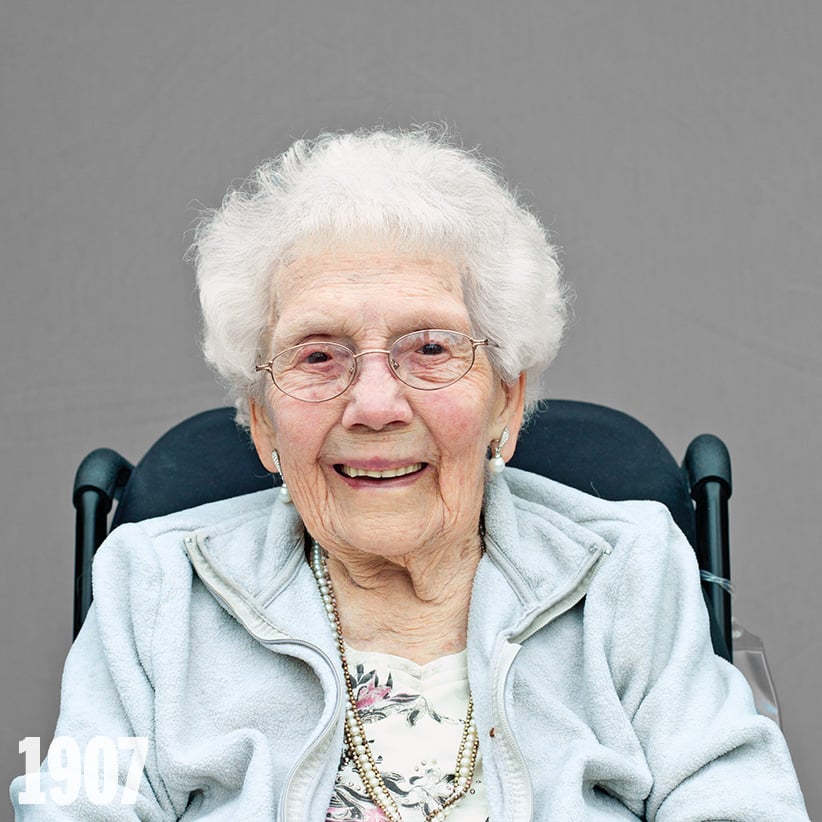 As Clara Auckland recollects 108 years’ worth of memories, she gently rocks her wheelchair back and forth, punctuating her stories with a wide grin and easy laughter. There were the mornings as a child when she’d visit her grandmother and help make butter—“first thing she would do was put me to work.” (Chuckle.) Or the times that “Indians” would come to her father’s butcher shop in Campbellville, Ont., and trade baskets for meat, “so our place was full of baskets.” (Giggle.) Then there was the day, during the First World War, when a sparrow landed on her windowsill and started singing as she helped her mother bake bread. When her mom said it was a sign they’d hear about a death soon, Clara thought, “Well, that sounds stupid.” (Cackle.) The next day, two soldiers arrived at her door and told the family her uncle had been killed in the war. (Silence.)

When she finished high school in Milton, Ont., Clara, the oldest of four, moved to Toronto, where she worked the switchboards for Bell. With her friends in the city, she staged a play, The Arrival of Kitty, to help a young man who’d broken his leg but couldn’t afford his hospital bills. During the production, she met Fred Auckland. “Really, my aim was to be a nurse,” Clara says. She had a job lined up at Guelph General Hospital, but, before she could go, Fred proposed and asked her to join him in King City, where he ran a barbershop and drove a school bus. She chose Fred over the job, and, she says, “it was the best thing I ever did.”

FROM THE ARCHIVES: Maclean’s chronicles 1907’s achievements in invention, including a look at “woman as inventor”

In 1937, Clara and Fred had Ross, the first of two boys, and bought a general store in Lowville, Ont., selling “everything from medicine to men’s boots” to the farmers that would ride in on horse and buggy. Their second son came in 1945; a pregnant Clara was visiting a farm out in the country when it started to snow. By the time she was ready to leave, the snow was too deep to go anywhere. She delivered the boy, Wayne, at the farm, and waited days before the snowplows cleared the roads for her to get to the hospital.

Ross and Wayne were raised on baseball and birdwatching. Once she retired from the store, Clara started doing crafts—knitting, leather work, pottery, painting. “Retirement,” however, didn’t last long; soon, she opened an antique shop, and, after that, worked in an upscale dress boutique. She kept driving until she was 95, when, despite passing her test with a near-perfect score, she decided it was time to quit.

Back in her room at a Milton, Ont., long-term care home, Clara is surrounded by keepsakes of a long, full life: photos of the general store; handmade crafts; a picture she painted of Fred, who died in 1988, with a white horse, one of many they owned together. “I always think positive,” she says. “I never get cross. But if I do, watch out!” For a second, she scrunches her face in feigned anger. Just as quickly, she smiles and gives up the act, erupting into a high-pitched howl. — Luc Rinaldi