Thousands still without power as storm wreaked havoc across southwestern British Columbia, with winds up to 80 km/h 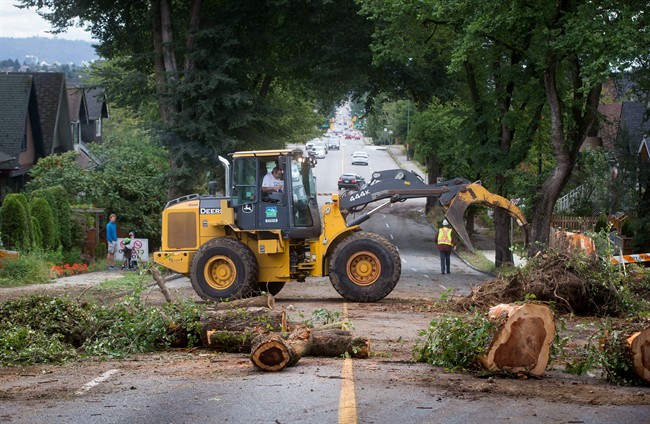 VANCOUVER – Had Vancouver resident Sherrell Hutchingson been standing a foot to the side while opening her car door during Saturday’s vicious windstorm it’s unlikely she’d be able to tell her close-call story of a large tree narrowly missing her as it crushed her vehicle.

“It was scary,” said the soft-spoken woman, laughing nervously on the street outside her East Vancouver home. “It went right by my head.

“It was like a big crack and the tree just snapped … and fell right on my car.”

Hutchingson’s experience was part of a myriad reported incidents of other smashed vehicles and wrecked roofs following a brutal windstorm that tore down trees and branches, wreaking havoc across southwestern British Columbia and leaving at its height an estimated 500,000 people without power.

Eighty-kilometre-an-hour winds buffeted the Greater Vancouver Area, at one point toppling a tree onto a woman in her 40s who was walking with her daughter in Surrey. The RCMP described the woman’s injuries as life-threatening.

Sadhu Johnston, Vancouver’s deputy city manager, described the scale of the storm as “unprecedented” and estimated it would take weeks for the city to fully clean up the debris.

“This is probably one of the most intense storms that we’ve had over the past decade,” he said during a news conference, while behind him city crews worked to remove fallen branches from the road.

“I think the drought combined with the high winds really impacted us,” he added. “The drought led to more trees coming down, which led to more power outages. So it kind of compounded.”

The cost of the extensive property damage and the bill for cleaning up the huge mess has yet to be tallied, he said.

In terms of damage, park board official Brian Quinn said timing was the biggest contributing factor. Such high winds typically arrive in the fall or winter when the trees are bare, he explained.

“This time of year with the canopies completely full of leaves, they act more as a wind sail and catch more of the wind,” said Quinn.

The bulk of the outages occurred in the Greater Vancouver Area, and BC Hydro said that as of early Monday morning about 90,000 customers were still waiting for the power to be restored.

BC Hydro said it could take until Monday morning to bring some residents out of the dark, including neighbourhoods in Coquitlam, Surrey and Port Moody.

The region’s 911 line was overwhelmed with inquiries about power outages, prompting officials to ask residents to call only in the event of an urgent emergency.

Metro Vancouver Regional District spokesman Rod Tulett said on Sunday that the district’s emergency procedures had so far performed well. He described the weekend’s gales as the backup system’s biggest test since the district was caught off-guard by a windstorm in 2006 that battered the Lower Mainland and uprooted numerous trees in Vancouver’s Stanley Park.

“After the big windstorm a lot of our facilities received significant upgrades in their backup-power capability,” said Tulett. “We learned from that.”

Residents took to social media with a mix of both praise and condemnation for BC Hydro and its response to the outages, with much of the vitriol directed toward the utility’s website only working sporadically.

“We followed our normal emergency protocol. … Everyone was contained into a building,” said Henderson about the incident. “At no time did our grizzly bear get out.”

Strong winds also swept through Rock Creek in the southern interior, where a 44-square-kilometre wildfire destroyed 30 homes earlier this month.

The storm triggered wind warnings from Environment Canada, forced the temporary closure of Stanley Park, and slowed ferry service between Victoria and the mainland.