In B.C., Alberta and beyond, forest fires are getting larger and way more difficult to handle. Get used to it. 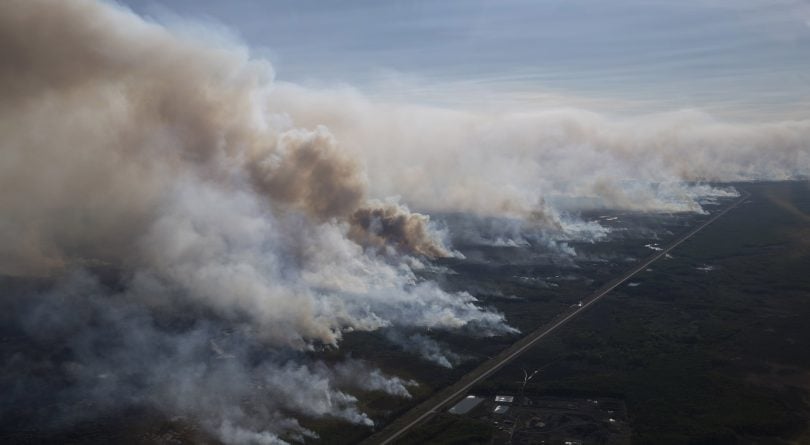 The 100,000-hectare Chuckegg Creek wildfire blanketed much of Alberta with smoke in May 2019 (Chris Schwarz/Government of Alberta)

On May 30, the morning that Alberta’s Premier Jason Kenney planned a news conference to take credit for repealing the provincial carbon tax he inherited from the NDP, Edmontonians woke up to discover their city covered in a thick yellow blanket of foul-smelling smoke.

By the end of the day, Environment Canada had issued air-quality alerts for most of the province. In Edmonton, the air measured 10-plus on a scale of one to 10, meaning it posed a “very high” health risk.

Kenney cancelled his carbon tax news conference to be briefed on the out-of-control wildfires turning tens of thousands of hectares of spruce, pine and aspen into ash. The most dangerous fire, and the source of much of the smoke, was the Chuckegg Creek fire—a 100,000-hectare monster threatening the town of High Level, 400 km west of Fort McMurray.

When Kenney next talked to reporters, after a speech in Calgary the following day, he confidently brushed aside questions about the irony of cancelling a carbon tax announcement because of fires that scientists link to climate change.

“The carbon tax didn’t stop forest fires in British Columbia or in Alberta,” Kenney said. “We’ve always had forest fires here. We always will. There’s complex factors here, one of which is, there’s huge patches of very old boreal forests where there have not been fires for, in some cases, 80 or 90 years. So all of the forestry experts will tell you these forests have been overdue for a major forest fire.”

The forestry experts will also tell you that forest fires—in Australia, California, British Columbia and Alberta—are bigger, hotter and more dangerous than fires in the past because of climate change, and we had better get used to them. This is the new reality, and there is reason to worry it will get worse and worse.

So far this summer, fires in northern Alberta have burned more than 800,000 hectares, an area bigger than Prince Edward Island. Unless Alberta gets a lot of rain soon, before the snow flies, the province will beat the record set in 1981, when 1.3 million hectares burned.

It looks like this will be a fiery summer, and not just in Alberta. As of early July, there were big out-of-control fires burning in unusually dry northwestern Ontario, and British Columbia’s fire season lies ahead.

These fires are different from forest fires in the past. They are often burning too hot, too fast and too big for firefighters to do much but stay out of their way.

There is too much fuel for them, not, as Kenney said, just because it has been too long between fires, but because it has been unusually dry for years, so that the top layer of the forest floor—which you would think of as dirt if you were walking on it—is catching fire.

On May 29, there were three pyrocumulonimbus storms in northern Alberta, fire-breathing monsters sending plumes of smoke up into the stratosphere, more than 10 km above the burning treetops. The smoke from these storms goes so high that, like the particles from volcanic eruptions, it can end up circling the world.

Mike Fromm, a scientist at the U.S. Naval Research Laboratory in Washington D.C. who tracks pyrocumulonimbus storms using satellite imagery from NASA, watched with interest this year as Alberta went off the charts. “In the past, in the span of May to June, you might get one to three on average,” he says. “This year we’ve had 10.”

Fromm tracked the smoke from one fire 300 km north of Edmonton as it moved east across Saskatchewan and Manitoba and eventually across Europe and Asia.

These monster fires are a challenge for Alberta, forcing officials to call for help from across Canada and around the world. Firefighters from as far away as Mexico and South Africa are staying at makeshift tent cities across northern Alberta, taking breaks between gruelling shifts putting out embers, cutting firebreaks and doing controlled burns, while choppers and water bombers fight the fire from the air.

In mid-May, when the wind was blowing away from High Level, firefighters were able to use heavy equipment to cut firebreaks, and burned about 6,000 hectares of trees so that there was no fuel between the fire and the town. Firefighters in trucks patrolled the evacuated town putting out burning embers, which can travel long distances through the air.

“We had conditions in May that were so dry that the fire burned overnight,” he says. “Normally, fires will lay down, or go to sleep. Of course, they’re still burning, but the rapid rate of spread, the crown fire, the really dramatic fire that you see, that stops in the overnight hours as the humidity increases and the temperature drops. During the month of May, the air mass was so dry that didn’t happen. The fire burned with full intensity all night long.” 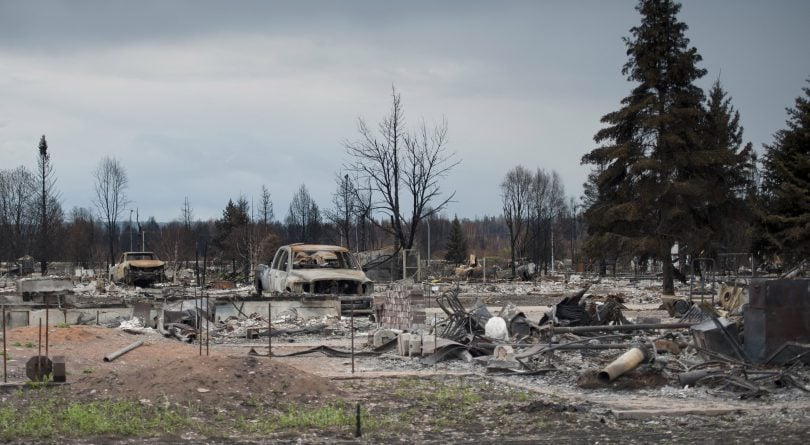 In 2011, a devastating wildfire ripped through Slave Lake, Alta., destroying much of the town and forcing thousands of people to flee their homes (Keith Levit/CP)

The experts say fires are behaving differently than fires used to. During the 2011 fire in Slave Lake, Alta., for instance, as water-bomber crews desperately did their best to save the town, the winds picked up.

“They hit that with 18 drops of retardant in 48 minutes, and at times it was no wider than a football field, and they couldn’t stop it,” says University of Alberta fire specialist Mike Flannigan. “They hit it with everything they had.”

Winds were gusting more than 100 km/h, so officials were forced to order the pilots to land.

“But it wasn’t making any difference anyway,” says Flannigan. “It was coming to town. Nothing they could do. It’s just too intense. It’s like spitting on a campfire. You can spit on it as many times as you want. Fire’s not going to go out.”

These new fires are also costing more than fires used to cost. The Slave Lake fire cost insurance companies an estimated $700 million. The 2016 fire that burned much of Fort McMurray, an estimated $9 billion.

So far, though, we have been lucky. It has been almost a century since a Canadian wildfire caused mass casualties, but there have been close calls. Officials in Slave Lake and Fort Mac were both criticized for waiting too long to order residents to flee.

It seems miraculous that nobody was killed in the hurried evacuation of Fort Mac, a city of 88,000, in particular, with frightened residents stuck in bumper-to-bumper traffic on a highway through a burning forest.

It was only the result of many acts of heroism—by firefighters, Mounties and volunteers—that nobody was killed. In another town, where most residents weren’t well-versed in how to handle a crisis, it would not have gone as well.

“I attribute the orderly evacuation to the safety training that the oil industry has contributed to that city,” says Finn.

But our luck may not hold. “In terms of civilian loss of life, it’s almost non-existent in Canada, but the day could come when we could see significant numbers of loss of life,” says Flannigan. “California has as good fire management as anywhere in the world, and they’re experiencing significant fatalities. Australia has very professional fire management, and in their Black Saturday fire, 170 people died.”

That tragic Australian fire in 2009 was accelerated by pyrocumulonimbus storms—so, too, was the 2016 Fort Mac fire.

Christie Tucker, a communications officer with Alberta Wildfire, saw one on a flight over northern Alberta this year with veteran firefighters.

“It definitely made an impression on me,” she says. “I had heard they had experienced pyrocumulonimbus conditions and I was very curious to see what it looked like. The other passengers had years of experience on fires and they spotted it right away. You could see it looked different from the other clouds in the sky, it was rounded like a cauliflower, and when we got close you could see the origin was the trails of smoke from the wildfire down below.”

Scientists believe we are getting more of these clouds because drought conditions have produced more fuel, so the fires are hotter. The same intense heat, which also makes the fires more unpredictable, means they may have greater environmental consequences.

Fire is a permanent feature of the boreal forest. Some species, like the jack pine, rely on fire to spread their seeds, and people who have walked through burned-over areas are impressed by how resilient forests are, how quickly they rebound.

But the hotter fires we are now experiencing may damage the soil. “If we do dry out too much and we have these large fires, they may not reforest back to the forest that preceded,” says Finn. “They may come back as grassland. And I suppose that is the worst-case scenario, that the grassland starts moving north.”

Canada’s vast boreal forest is a storehouse of carbon. Our forested land is larger than the entire country of India. But it is under increasing stress and it is releasing carbon.

In 2016, because of human activity, insect infestations and wildfires, Canadian forests released 78 megatonnes of carbon into the atmosphere, about 10 per cent of our total national emissions from all sources. Canadian forests haven’t been a carbon sink since 2001.

“There are two really big processes going on,” says Flannigan. “One is photosynthesis, which is producing carbon, adding it to our vegetation, and the other is decomposition. And these are really big, and almost balancing each other out. But then disturbances decide which side of the ledger sheet we’re on. And recently, because of the amount of disturbances, more often than not our forests are a source of carbon.”

As the climate gets hotter, and fires get more frequent, our forests can be expected to release more carbon. “A forest fire may release many, many tonnes of carbon dioxide but as that new forest grows, it starts dragging that carbon dioxide back out of the air,” says Finn. “At some scale, that’s a closed cycle. If we have frequent fires and degrading fires, that can change.”

Research at the site of the Fort McMurray fire has found that in some cases, the fire burned the peat under the forest all the way down to the minerals, which has grim implications for watersheds and forest recovery.

Flannigan is worried that as the northern peat bogs get warmer, we could risk vast carbon emissions from fires. “We have a lot more peat that is now more vulnerable than it has ever been. And this is legacy carbon that could be emitted.”

For now, though, officials in Alberta are focusing on getting through the hot, dry summer of 2019. “We will be dealing with these fires, in all likelihood, until snow flies,” says Finn. “The fires are so large and because of the dry conditions, I’m comfortable saying they won’t be extinguished until winter comes.”

This article appears in print in the August 2019 issue of Maclean’s magazine with the headline, “Too hot to handle.” Subscribe to the monthly print magazine here.