Let's go to the Ex, with Bill Clinton

The U.S. is “saddled with the wrong kind of [health care] system” 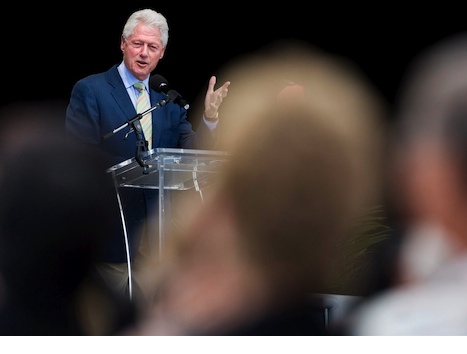 The build-up to Bill Clinton’s appearance at Toronto’s CNE featured none of the hype its organizers had presumably hoped for. Just a day before the event, only 7,000 tickets had been sold, prompting organizers to dramatically scale back the number of tickets available from 25,000 to 10,000. By Saturday, CNE officials were selling tickets to those already inside the fairgrounds for a mere five bucks.

Given the event’s vague, banal title—“Embracing Our Common Humanity”—it was never entirely clear what topics Clinton was planning to touch upon. However, to the 12,000 who did end up at Toronto’s BMO field on this sunny Saturday afternoon, that didn’t seem to matter. Clinton was greeted with a standing ovation before he’d uttered a single word.

The hoarse-voiced and tired-looking former President generously repaid the favour, beginning his speech with a tribute to the CNE. He noted the Ex’s history-making displays of electricity, telephones, radio and other contemporary gadgetry, celebrating its role in bridging the technological divide between urban and rural areas. In fact, the need to better equip those living in the world’s rural areas was a point Clinton would revisit often. “We live in a time,” he said, “where it’s very important to merge values.” Clinton said modern societies are crippled by the “uneven” economic and social conditions that separate their urban and rural dwellers.

An anecdote about his foundation’s work to build medical facilities in Ethiopia that are accessible to the country’s 80 million citizens provided Clinton with a segue into the afternoon’s most compelling subject: the ongoing debate over health care in the U.S. In a sharp departure from the rest of his speech, Clinton showed that he has lost little of his partisan political instincts. The U.S., he said, is “saddled with the wrong kind of [health care] system,” musing that the debate over Barack Obama’s proposed reforms must appear absurd to Canadians. “You must wonder what in the world are my friends to the south thinking? Why don’t they just pass some bill? How could it be worse?” In his only direct reference to his time in office, Clinton said those who oppose reforms share a trait with those who opposed his own health care proposals in the early ’90s—they are, he said, “full of fear.”

Unfortunately, the former President reverted back to the formless, fuzzy vernacular that made up the first part of his half-hour speech. The U.S. and Canada, he said, are increasingly defined by a “common humanity”; there is a need for world leaders to balance environmental policy with “good economics”; and good government, ethical business leaders, and effective philanthropy are essential to change.

Aside from a question about the best decision U.S. political leaders can make to improve the world—“to radically change the way we produce and consume energy,” according to Clinton—the CNE’s Greg Bednar, who moderated a brief question-and-answer session with Clinton following the speech, did little to sharpen the discussion. Bednar used his final question to toss the former President a softball, asking him what he loved most about Toronto. It’s a “city of the future,” Clinton replied to applause, one that’s “friendly” and comfortable with its traditions. “There are a lot of people,” he added, “who would kill to live in an environment like this.”

It was, in its own way, a fitting end. Though Clinton’s speech was peppered with references to his foundation’s work, it was marked by a consistent retreat to the parochial—references to his visits to Canada, the Canadian health care system, the history of the CNE. Our “common humanity,” at least that shared by those in attendance, appears to be anchored by a love of two things: ourselves and Bill Clinton.