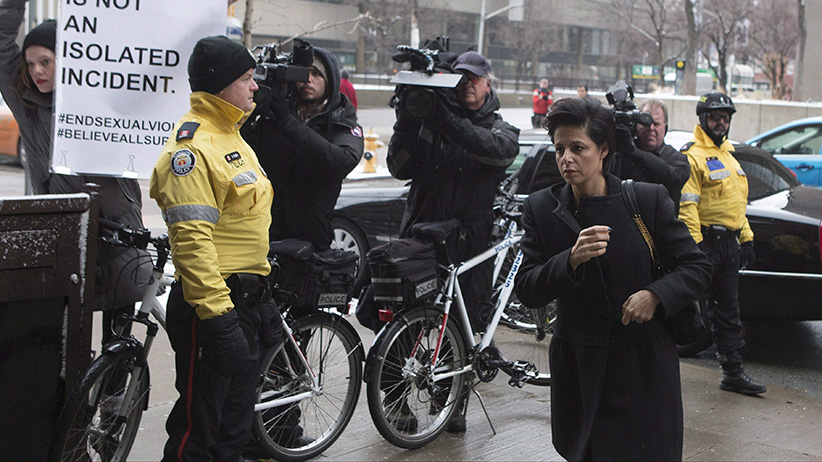 TORONTO — The judge at Jian Ghomeshi’s sexual assault trial says he will deliver his verdict on March 24.

Justice William Horkins announced the date after the Crown and the defence wrapped up their closing arguments.

Ghomeshi’s defence lawyer says the Crown has failed to prove beyond a reasonable doubt that the former broadcaster committed the crimes of sexual assault and choking.

In their closing arguments, lawyers Marie Henein and Danielle Robitaille said that in the course of the trial, Ghomeshi’s three accusers were proved to be unreliable witnesses who withheld information from police and even lied to the court.

The lawyers used especially tough language when summarizing the testimony of one of the complainants — “Trailer Park Boys” actress Lucy DeCoutere — who’s accused Ghomeshi of choking and repeatedly slapping her while they were kissing in his bedroom.

Henein says DeCoutere’s testimony related to one of the charges — overcome resistance by choking — doesn’t meet the elements of the offence, since she testified that she was not resisting when Ghomeshi was allegedly choking her.

Crown prosecutor Michael Callaghan said earlier today that the credibility of Ghomeshi’s three accusers has nothing to do with the way they behaved after the alleged incidents, since the law is clear that everyone responds differently to sexual assault.

Henein agreed that the women’s behaviour and their continued involvement with Ghomeshi after the alleged sexual assaults were not relevant to the case. However, she said that the fact they lied to the court was.

“There is not an expert who will testify that perjury is indicative of trauma,” Henein said.

“What a witness cannot do is lie about their conduct and then say “Oh geez, that’s just how victims of trauma behave.'”

Callaghan said in his closing arguments that each of the complainants reacted to the alleged sexual assaults in their own unique ways based on their individual personalities and life experiences.

He said the first complainant didn’t go to police immediately after the alleged assaults because she didn’t think her allegations were serious enough.

Callaghan adds another complainant, “Trailer Park Boys” actress Lucy DeCoutere, didn’t go to police immediately because she was unsure of the reporting process.

The third woman only came forward in 2014, Callaghan says, because media reports of other allegations against Ghomeshi caused her to see a pattern.

The 48-year-old former CBC Radio host, who has pleaded not guilty to the charges, didn’t testify during trial and has maintained his silence ever since being arrested in November 2014.

Ghomeshi acknowledged in October 2014 that he engaged in rough sex acts, but said it was consensual.