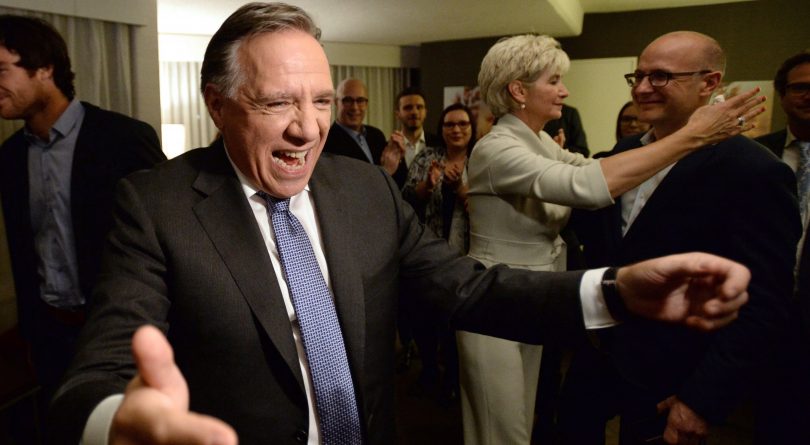 The Coalition Avenir Quebec has shattered nearly a half-century of two-party political rule in Quebec by winning an election Monday that has redrawn the province’s electoral map.

The party has won a majority mandate and was elected or leading in nearly 75 of the province’s 125 ridings. Coalition Leader Francois Legault guided his right-leaning, seven-year-old party to victory Monday following a 39-day campaign.

Legault’s party surged out to a strong start shortly after polls closed, leaving the Liberals in second and the Parti Quebecois in a distant third.

With support for independence sliding, the PQ is now facing an existential crisis. The party has steadily watched its support slide after spending about 20 of the last 48 years in office.

The numbers began flowing in following a tightly fought campaign that many had predicted would shake up the political landscape.

The Coalition was leading in more than 70 ridings—well above the 63 seats required for a majority. The Liberals were leading in about 32 ridings.

The once-mighty PQ appeared poised to suffer a resounding defeat as it battled with the left-wing Quebec solidaire for the distant third place.

Legault, a former businessman and co-founder of Ait Transat, ended nearly 15 years of continuous Liberal rule with the victory.

The Coalition party gathered significant support, even though the Liberals were in power as Quebec’s economy surged in recent years.

Opinion polls, however, had suggested for months that voters were looking for a change.

The Coalition win delivered something Quebec hasn’t seen in 48 years—a provincial government headed by a party other than the Liberals or the Parti Quebecois.

The Union Nationale won the 1966 election and held power until 1970. Since then, however, it’s been a two-party show.

The emergence of Legault’s party, which won just 22 seats in 2014 to finish third, came in large part at the expense of the PQ.

Polls have consistently indicated the pro-independence PQ, which is led by Jean-Francois Lisee, will come in a distant third.

The PQ’s raison d’etre—Quebec sovereignty—has lost its lustre with voters.

For the first time in decades, talk of a referendum on independence was not a ballot-box issue.

The federalist Liberals and the Coalition, even though it’s led by former PQ cabinet minister Legault, have no interest in holding a referendum.

Faced with the shift in public sentiment, Lisee entered the race with a vow not to hold a referendum on sovereignty in his first mandate as premier.

The party, perhaps, that’s discussed referendums the most during the campaign is the smaller, pro-independence Quebec solidaire, which won two seats in the 2014 election.

The Liberals had 68 seats at the legislature’s dissolution, while the PQ had 28, the Coalition 21 and Quebec solidaire three. There were five Independents.

At the end of the campaign, two leaders had stayed ahead of the pack: Legault and Couillard.

But even if the final vote count is close, polls had suggested the Coalition could capture many more ridings than the Liberals because of its support among francophone voters.

Legault won power from the Couillard, who only lasted four and a half years as premier.

Couillard had touted his government’s balanced budgets as well as the province’s falling unemployment rate and strong economic performance.

Both leaders faced criticism at times: Couillard for having reduced health and education budgets early in his mandate, and Legault for a controversial plan to “expel” immigrants who fail to pass a language and values test within three years of arrival.

While Legault began the election campaign as the front-runner, the party’s lead dwindled as the Liberals gained ground later on.

With the PQ promising to not hold a sovereignty referendum in the next four years, Lisee’s campaign has focused on immigration, health care and the best way to spend the province’s billions in budget surpluses.
But despite their differences the leaders found common ground Monday—they criticized the federal government for its renegotiated continental trade pact with the United States and Mexico.

The federal Liberals agreed on a new deal to replace the North American Free Trade Agreement and it included opening up more access to Canada’s dairy market, which includes many producers from Quebec.

Couillard called a Monday afternoon news conference to denounce the agreement, which he called “very bad for Quebec.” He said he phoned Prime Minister Justin Trudeau to inform him of Quebec’s “profound disappointment” in a deal.
Legault said he would be speaking to Couillard and that he wanted to study all possible options to defend agricultural producers.

“I want us to be able to look at what is best for Quebec as a whole,” he said after casting his ballot in his riding of L’Assomption, northeast of Montreal.

“Compromises were made at the expense of Quebec agricultural producers,” he said. “It’s disappointing.”

Lisee seized on the agreement to urge voters to cast a ballot for his party, which he said is the best-placed to defend Quebecers’ interests.

“This agreement is a disgrace,” Lisee said after voting in his Montreal riding of Rosemont.

“A disgrace for Canada, a disgrace for Quebec. It is an expression of the systemic injustice Quebec is victim of within Canada.