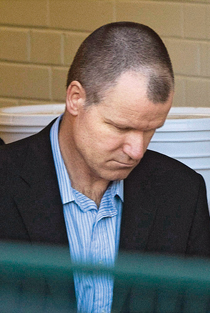 As soon as Russell Williams stood up in court and admitted his crimes, the military severed all ties. The killer colonel was promptly booted from the air force for “service misconduct” (the gravest breach possible) and became the only officer in Canadian history to have his commission revoked. The Forces even torched his uniform.

But it turns out that the military’s efforts to forget the name Russell Williams actually began many months before his October guilty plea—when a team of contractors tore up his former office at CFB Trenton. According to documents obtained by Maclean’s under the Access to Information Act, the “cosmetic work” was ordered by the chain of command on Feb. 10, 2010, just 48 hours after Williams was charged with two murders and two sexual assaults. The renovations left behind no trace of the disgraced commander: construction crews tore out the carpet, repainted the walls and replaced every piece of furniture. “This should be considered high-priority work,” Lt.-Col. Sean Lewis, Trenton’s engineering officer, wrote in an email to colleagues. “Please be patient while we get these renos done.” The remodelling cost taxpayers $10,336 ($6,656 for material; the rest for labour).

Capt. Jennifer Jones, a base spokeswoman, insists that the facelift had nothing to do with boosting morale. “The renos were needed for some time but scheduling a week to get them done was challenging,” she says. “The office’s vacancy allowed the construction engineering folks to get in there and get them done.”

In the meantime, another order was circulated via email: “Pictures of the previous Wing Commander on the honour walls should be removed.”