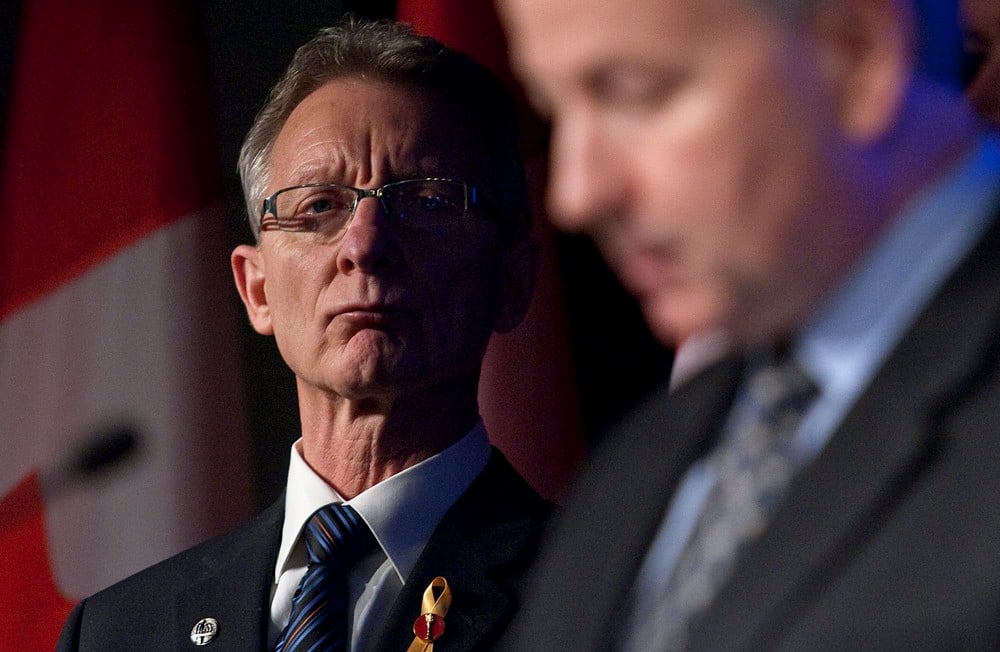 Senator Pierre-Hugues Boisvenu listens as Minister of Justice Rob Nicholson makes an announcement regarding an amendment to the Youth Criminal Justice Act to strengthen its handling of repeat young offenders in Ottawa in 2010. (Pawel Dwulit/The Canadian Press)

OTTAWA – A Senate committee is debating what — if any — sanction to level against a Quebec Conservative who was found to have breached parts of the upper chamber’s conflict-of-interest code.

Sen. Pierre-Hugues Boisvenu got a chance Monday to testify behind closed doors about why he continued to employ his girlfriend as an assistant, even though it violated Senate guidelines.

Boisvenu renewed a job contract for his girlfriend on two occasions, and tried to ensure a two-week special leave for her as she moved from one job to another in Senate administration.

A few weeks ago, the chamber’s ethics officer Lyse Ricard found that even though he broke the rules, the actions were “an error of judgment made in good faith.”

She recommended no sanctions against Boisvenu, a former victims’ rights advocate appointed by Prime Minister Stephen Harper in 2010.

Ricard says Boisvenu first met Isabelle Lapointe in 2010 at a charity event and eventually hired her to work as his executive assistant.

Shortly afterward, they began having an affair and during that time he renewed her contract twice before she moved to another job within the Senate.

Boisvenu was found to have acted inappropriately by not only renewing the contract but also by lobbying Senate leadership over how time off Lapointe had taken was to be counted.

Going into Monday’s closed-door hearing before the Senate ethics committee, Boisvenu offered no comment on the report’s findings.

Conservative Sen. Raynell Andreychuk said the committee will want to reflect on Boisvenu’s arguments before making a decision.