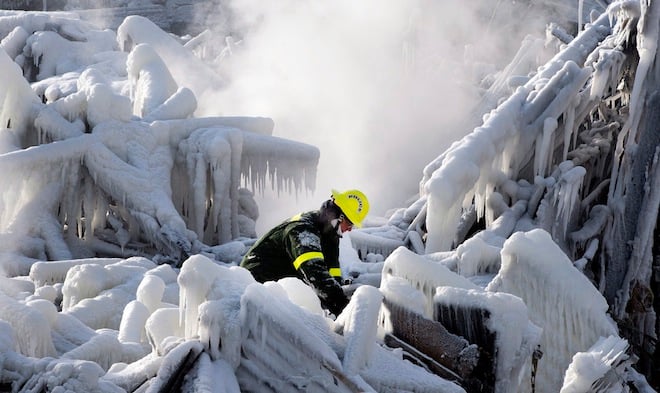 A police investigator searches through the frozen rubble of a seniors residence Friday in L’Isle-Verte, Que. (Ryan Remiorz/The Canadian Press)

RIVIERE-DU-LOUP, Que. – The doors of the seniors’ home that burned down last January, killing 32 people, were locked from the inside as residents tried desperately to flee the smoke and flames, a coroner’s inquest heard Monday.

Several 911 calls the night of the tragedy were played, including some from Irene Plante, co-owner of the Residence du Havre in L’Isle-Verte.

“It’s urgent,” she said in one made at 12:29 a.m., seven minutes after the central alarm system went off.

Told by the 911 dispatcher that firefighters were on the way, Plante said, “They’re going to need help.”

Plante called back eight minutes later and asked if help was on the way for L’Isle-Verte.

“It’s for the Residence du Havre”? the 911 dispatcher asked. “There are four ambulances on the way. The firefighters have been advised. The police as well. OK. Are people indisposed?”

“I can’t get out,” Plante responded. “It’s locked by the inside. They’ll have to come through my apartment. It’s the only one where there are no problems. There’s thick, thick smoke.”

In another call, this one at 12:43 a.m., resident Rosaire Lapointe was repeatedly told to put an article of wet clothing at his door to prevent the smoke from getting in.

The man is then heard wheezing for several seconds before the line goes dead. Lapointe survived the tragedy.

Related reading: On the lives lost on L’Isle-Verte

Many of the occupants in the 52-unit building were over 85 and all but a handful had limited mobility, being confined to wheelchairs and walkers.

The home’s older wing, which was destroyed, was built in 1997 and did not have an automatic sprinkler system.

The blaze broke out just after midnight on Jan. 23 on a particularly cold night that saw firefighters’ work hampered by strong winds.

The temperatures contrasted with the roaring flames that illuminated the night sky as firefighters poured gallons of water on the burning building.

Police recently sent their report on the tragedy to the Crown prosecutors’ office, which will decide whether to lay charges.

Residence co-owners Plante and Roch Bernier are part of a $3.8-million civil lawsuit against the town of L’Isle-Verte. The suit alleges the community failed to implement emergency plans which might have lowered the death toll.

An insurance company is also involved in the lawsuit and is seeking $2.3 million of the $3.8 million.