Could the walrus return to the Maritimes?

The animals once thrived in the region, prompting some locals to mull over a tricky problem: how to bring them back 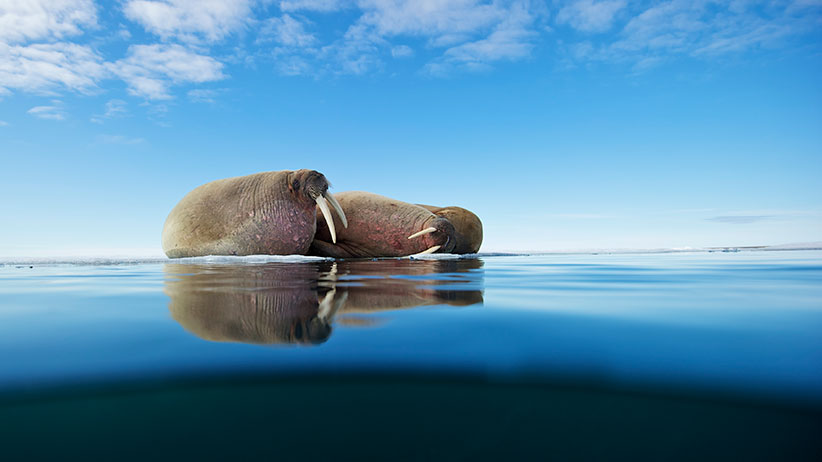 One school of thought in Atlantic Canada states that walruses need to come home. Four hundred years ago, they basked on the shores of Prince Edward Island, New Brunswick and Nova Scotia, barking and wailing in walrus parlance—but after hunters killed off their population, the herds were no longer heard. “There has been this thought,” says Hal Whitehead, a biologist at Dalhousie University: “why don’t they bring the walruses back?”

In May, 2017, Newfoundlanders witnessed a walrus cruising down the coast, a suspected hitchhiker on an ice floe from the Arctic. While locals hyped up this marvel, the region was once a walrus hub, and some residents want to recolonize the species to attract tourists and control pesky seals. However, wild walruses—in Latin: “tooth-walking seahorses”—do not travel well, and since their Arctic calves might not thrive in southern waters, the return of the walruses could go wrong.

“The walruses you bring in wouldn’t be the right ones,” says Whitehead, explaining that experts would need to recruit  mammals from the north Atlantic that differ from the original Maritime walruses. To “bring in” the walruses, Whitehead adds, “the thought is you would go and catch some, put them on a boat or plane and let them out on Sable Island and hope for the best.”

Some people warn of the worst. “It’s not like putting a cat in a crate,” says Jill Marvin, director of conservation and animal care at the Aquarium du Quebec, which has five walruses. “You can’t control 11,000 kilos.” Even before capturing an animal, humans might spook them by flying a plane overhead. Such noise could lead walruses to stampede, killing individuals in the middle of the pack.

On the voyage, the animals might survive an entire day out of water but would need a climate-controlled vessel, and they would still risk over-heating or becoming dehydrated. When aquarium staff transport domestic walruses, they spend weeks rehearsing with the animals to acquaint them with crates, and they know how to solve their stress. “Like when you’re traveling with a child and you can give them a piece of gum,” Marvin explains, “we know them left and right. We know when a whisker’s broken. If my walrus is not feeling well, it would stop opening its mouth, stop eating …  a wild animal would not give us those same warning signs.”

The relocation idea began in the Magdalen Islands, with millionaire business owner Jean-Pierre Leger, CEO of the St-Hubert restaurant chain in Quebec. “He’s very passionate about walruses,” explains Gil Theriault, director of the Magdalen Islands Seal Hunters’ Association. Theriault explains that Leger, who couldn’t be reached by Maclean’s, owns property on the Islands and consulted a biologist, but after a cost and risk assessment, “we were not convinced that it would’ve been a smart way of spending money.”

In 17th century Atlantic Canada, there were possibly more walruses than humans. An estimated 100,000 walruses lived in the Maritimes and Quebec, while Statistics Canada only has record of about 2,500 people in the region called New France, extending from Newfoundland to the Prairies. Yet, hunters eradicated the population in greed for ivory-like tusks, hides and blubber.

Today, Atlantic fishermen would welcome walruses, as the mammals eat seals, a main predator of lucrative fish stocks. Tourists would also go wild; Brenna McLeod, a biologist at Saint Mary’s University, says groups have contacted her about recolonizing the beasts around New Brunswick. However, she says, “it’s not something that seems realistic or feasible.”

McLeod is a downer for a reason. Modern walruses are different from the 17th century Maritime strain, as McLeod learned from the morphology and DNA of centuries-old skulls on Sable Island. Walruses are symmetrical nowadays, while the species that once thrived further south had mismatched tusks and lopsided bodies. McLeod suspects that they used one preferred flipper to clear residue from the ocean floor to search for food, as if they were right- or left-handed.

Rather than embracing the Maritimes, today’s walruses might get homesick for the Arctic. “They’re ice-loving animals,” says McLeod. “I don’t know if we relocated one, if it would try to go back home.” Indeed, while walruses have changed, the Maritimes have become less hospitable. Freight ships and humanity would complicate the walrus integration, and on Sable Island, the creatures would now be roommates with a group of horses, which were transported to the massive sand dune when the British expelled the Acadians from Nova Scotia, almost the exact time when the local walruses went extinct.

Sable Island horses have been a success story, but they were transported by boat and don’t require eating six per cent of their body weight per day in fresh meat. While Arctic ice would make it difficult to transport walruses by boat, a flight would be traumatic. Aside from the noise of the engine, their ears could be sensitive to air pressure, and walruses don’t chew gum.