Bylaw passed 7-4, with three councillors saying they will not take the salary increase 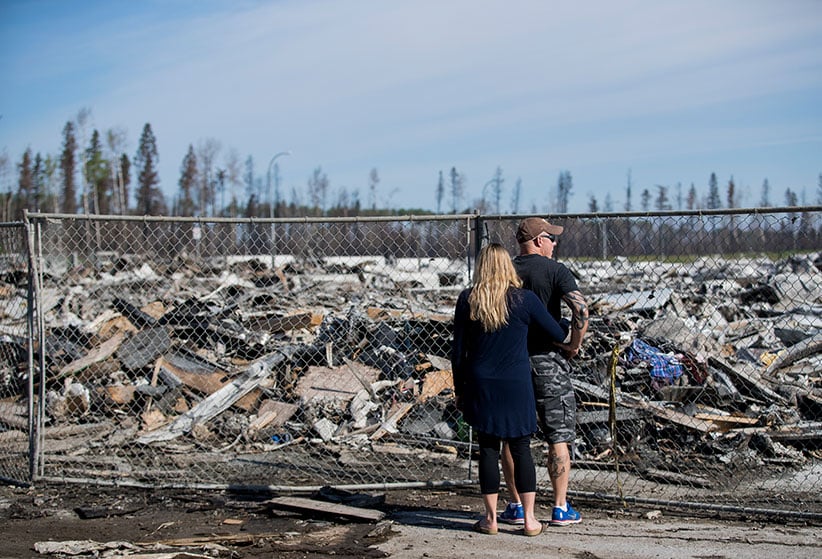 Scott and Samantha Borowsky survey the damage of their neighbourhood in Prospect Point in Fort McMurray on Thursday, June 02, 2016. The couple who lived at 121 Siltstone Place lost their home in the fires. (Photograph by Chris Bolin)

FORT MCMURRAY, Alta. – Councillors from a northeastern Alberta municipality severely damaged by a huge forest fire have voted themselves a hefty raise.

The Rural Municipality of Wood Buffalo includes the city of Fort McMurray, which saw more than 80,000 residents flee from the wildfire that destroyed several neighbourhoods seven weeks ago.

Council voted Tuesday night to pay three of its members and Mayor Melissa Blake $150,000 a year to work full time on a recovery committee.

The other seven councillors, whose positions are considered part time, will see their pay rise to $75,000 a year from $36,000.

Councillors on the recovery committee are Keith McGrath, Sheldon Germain, Allan Vinni and the mayor.

Blake, Stroud and Ault said after the council meeting they will not take the salary increase.

The bylaw states committee members who are also councillors “shall devote their effort and attention to the work of the committee as they would to a full-time job, and thus shall take steps to reduce their time commitment to their other business interests or employment as may be required in order to devote such level of effort and attention to their committee duties for so long as the post-wildfire recovery period lasts.”

It says the other councillors “will be required to devote an increased level of effort and attention to their council duties and activities since the normal council and council committee work will continue.”

The committee begins work Wednesday and six members of the public are to be appointed following a selection process.

Once all members have been chosen, a chair and vice-chair will be selected.

“Child care, lost time in my business, lost opportunities elsewhere, do cost me much more than I ever earn,” she said. “It does seem obscene on face value, to ask for a raise in these extreme and very hard times, but the justification I do feel is there.”