Faces in the crowd on Canada Day 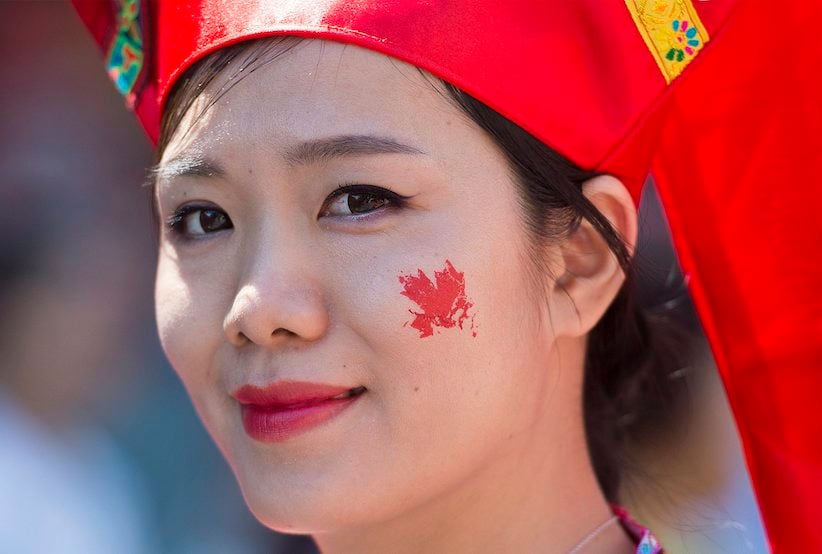 One face in the crowd during the annual Canada Day parade in Montreal. (Graham Hughes, Canadian Press)

OTTAWA — Canadians marked their country’s 149th birthday Friday with coast-to-coast celebrations headlined by a big party in Ottawa — where thousands turned Parliament Hill’s lawn into a vast expanse of red and white.

The masses, many wearing red T-shirts, face paint and Canadian flags as capes, crowded in front of Centre Block to listen to bagpipers, watch the Snowbirds roar overhead and take in stage performances by numerous artists. Together, they also belted out the national anthem.

“Before I get started I have to say, like so many of you here, I’ve been coming to Parliament Hill since I was a little kid for Canada Day,” Trudeau told the crowd from the podium.

“And to be able to stand here before you as your prime minister to say thank you for the trust you have given me is a little bit overwhelming.”

Trudeau listed examples of what he called “extraordinary diversity,” noting how the country has two official languages and that more than 100 other tongues are spoken across the country. He also said his government is renewing its relationships with Aboriginal Peoples all while respecting their ancestral traditions.

“We are a country where everyone is equal, regardless of our sexual orientation or our sexual identity,” Trudeau said, drawing cheers.

Before Trudeau’s speech, well-known musicians took the stage one after another, including Kardinal Offishall, Coeur de pirate, Alex Cuba, Les Hay Babies and Coleman Hell. There was also an appearance by Les 7 doigts de la main, artists who combine dance, theatre and acrobatics.

During Kardinal Offishall’s opening performance, Trudeau, his wife Sophie Gregoire Trudeau, Gov. Gen. David Johnston and Heritage Minister Melanie Joly jumped out of their seats to clap and bop to the music. A smiling Gregoire Trudeau turned around at one point to gesture to the crowd behind them to stand up as well.

The atmosphere was upbeat at the Parliament Hill party even though the grounds were surrounded by security checkpoints. Those who wanted to enter the area had to line up and have their bags searched by police.

The celebrations in the capital will be capped off Friday with a huge fireworks display, like many cities across Canada.

In the northern Alberta oilsands capital of Fort McMurray, which is rebuilding after a May wildfire destroyed buildings and forced the city to evacuate 90,000 people, the Canada Day parade Friday was all about appreciation.

Grinning firefighters waved to the crowds from trucks that had rushed to the rescue two months ago. Wildfire crews, decked out in their familiar orange jumpsuits, also took part as did RCMP and other first responders.

Meanwhile in Vancouver, hundreds of people dressed in red and white marked Canada Day in a different way. They gathered for a rally supporting the legalization of marijuana.

More than a dozen vendors — many of whom waved a version of the Canadian flag featuring a marijuana leaf — were selling everything from spiked cookies to small bags of pot.

For some, July 1 also marked another significant date in history.

Earlier in the day in Ottawa, Trudeau paid homage at the Canadian War Museum to soldiers who died in the battles of the Somme and Beaumont-Hamel in France exactly one century ago during the First World War.

Some 800 members of the Newfoundland Regiment, armed only with rifles and bayonets, were ordered to face German machine gun fire. Only 68 answered roll call the next morning.

“July 1, 1916, marked a pivotal moment in time, a moment that has since entrenched itself in Newfoundland and Labrador identity and history,” Trudeau said.

“This would become the bloodiest battle of the war. Our men rose with courage, fought like lions and died as heroes. The deaths touched many families across the dominion of Newfoundland, a generation of young men lost.”

Looking to Canada’s 150th anniversary in 2017, Trudeau said during his speech that Canadians will have more to celebrate next year if they work hard.