Judge: Couple who killed Saunders destroyed trust of loved ones 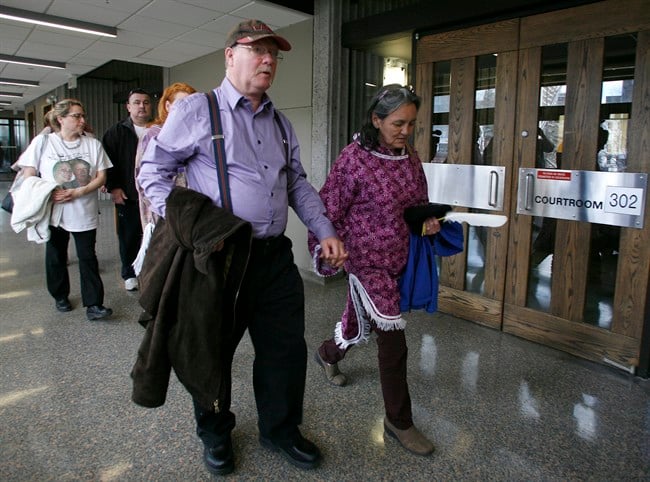 Clayton and Miriam Saunders, parents of Loretta Saunders, hold hands as they walk into court for the sentencing of Blake Leggette and Victoria Hennebery in Halifax on Wednesday, April 29, 2015. (Darren Pittman/CP)

HALIFAX – The couple who lured Loretta Saunders into an apartment, killed her and left her body in a hockey bag along a highway destroyed the trust of those who loved her, a Halifax judge said Wednesday.

Judge Josh Arnold of the Nova Scotia Supreme Court sentenced Victoria Henneberry to life in prison with no eligibility for parole for 10 years after she pleaded guilty to second-degree murder.

Blake Leggette faces an automatic life sentence with no parole eligibility for 25 years after he pleaded guilty to first-degree murder.

Arnold said the day Saunders was killed forever changed the many people in her life.

“The treachery of Mr. Leggette and Ms. Henneberry has polluted so many lives,” Arnold said.

“On that day, Mr. Leggette and Ms. Henneberry introduced a foul poison into their lives and destroyed their innocence, their sense of security, their trust in others and left them broken-hearted and empty.”

In his ruling, Arnold accepted the joint sentencing recommendation from the Crown and defence.

“Ten years for a cold-blooded murderer, blood on their hands from my daughter and she got 10 years,” Clayton Saunders said in reference to Henneberry’s sentence.

“Now what kind of justice is that?”

Earlier during the sentencing hearing, the mother of Loretta Saunders delivered a victim impact statement describing how her daughter overcame a life of drug abuse and sleeping on the streets to pursue a university education.

“I will always be so proud of what she accomplished in her 26 short years of life,” she told the court, breaking down and sobbing loudly.

“Me and my family’s life has never been the same. … My heart constantly aches.”

Both Leggette and Henneberry made statements of apology to the family for what they had done.

“I am sorry I stole Loretta from you,” Leggette said in his brief statement to the court.

Henneberry, turning to face family members, said, “I am so sorry. … It’s sad to know I was involved in the death of someone.”

In arguing for a 10-year parole eligibility period for Henneberry, Crown attorney Christine Driscoll said that while she was a party to the murder, there is no admissible evidence she was involved in the planning or execution of it.

Many supporters of Saunders and her family attended court wearing T-shirts that said, “Speak the truth even if your voice shakes.”

Two statements of fact were submitted to the court that say Leggette and Henneberry were having financial difficulties soon after they moved into a sublet room in Saunders’ apartment, which they had found through a Kijiji ad in January 2014.

The documents say the two wanted to get out of Halifax, but they don’t say why.

On Feb. 13, 2014, Saunders went to collect rent from the couple but they didn’t have the money, and Henneberry lied when she said she had lost her bank card and needed to contact her bank, according to one of the statements.

Leggette then grabbed Saunders by the throat and choked her, but the young woman fought back, managing to tear through the three plastic bags he pulled over her head.

At one point, Leggette and Saunders fell down. He twice hit her head on the floor and she stopped moving.

“Ms. Henneberry remained during the struggle,” the documents say.

Saunders’s body was found in a hockey bag on the side of the Trans-Canada Highway near Salisbury, N.B., about two weeks after she was reported missing.

Five days later, Leggette and Henneberry were arrested in Harrow, Ont., while driving Saunders’ car. They also had the woman’s phone, bank card and identification.

Saunders, an Inuit student from Labrador, was attending Saint Mary’s University and focusing her studies on missing and murdered aboriginal women at the time of her death.