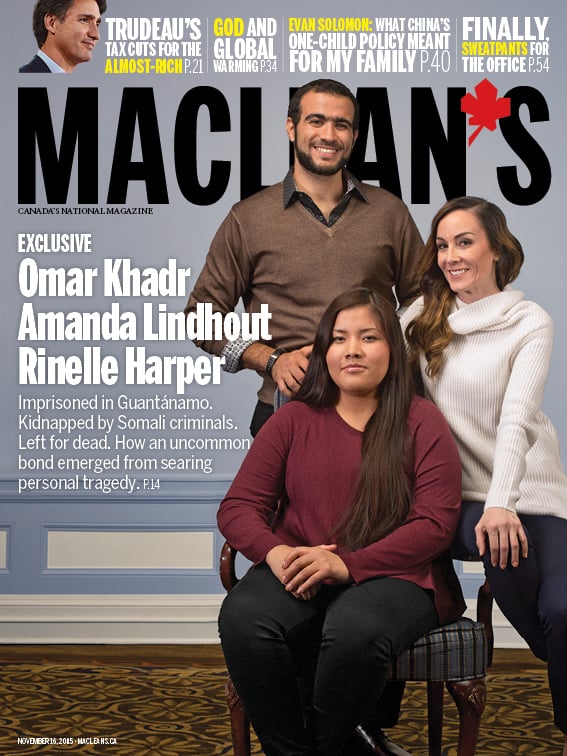 Rinelle Harper was left for dead on a Winnipeg riverbank, beaten and sexually assaulted. Omar Khadr was imprisoned in Guantanamo, captured in 2002 by American forces in Afghanistan and charged with war crimes. Amanda Lindhout was kidnapped by Somali criminals, and held hostage for 460 days.

The three Canadians have little in common, beyond the recognition of their names from the news. But they have each suffered immensely—more than most of us can understand. So in that way, it makes complete sense that Lindhout received a kind letter from Khadr two years ago. It makes sense that Rinelle’s mother reached out to Lindhout over Facebook.

The connection between the three remains, however, remarkable and utterly improbable. This week in Maclean’s, Lindhout writes about how this uncommon bond came to be, and how horrific personal tragedies drew these three into a close, unlikely friendship.

“Whether we like it or not, Omar, Rinelle and I all have a public stage—an opportunity, that is, for people to hear us,” writes Lindhout. “Is it a responsibility? To speak a message that can help people somehow, and potentially help us to derive meaning from our tragedy? Publishers, like movie directors, find us. It’s an old, tired game. The great temptation is to try to put our trauma behind us and live a ‘normal’ life, but all three of us know there is little normal in what has happened so far. Why should the future be normal, either?”

You can read their story in the newest issue of Maclean’s, available Wednesday night for tablet and mobile readers on Texture, Apple Newsstand and Google Play, and on macleans.ca later this week.