Despite claims of reform, the RCMP is facing hundreds of new sex-assault allegations

Four years after RCMP spokesperson Catherine Galliford shone a light on a crisis of sexual harassment and retribution within the force, female Mounties tell Maclean’s that the same old syndrome persists: Faced with a revelations of harassment, they say, the RCMP too often manages to protect the accused harasser while punishing the victim.

The Mounties insist they’ve recognized the problem and, armed with new tools, are poised to act. Laws that came into force two months ago have beefed up Commissioner Bob Paulson’s powers to fire perpetrators, while long-awaited processes for resolving harassment complaints are on the books. 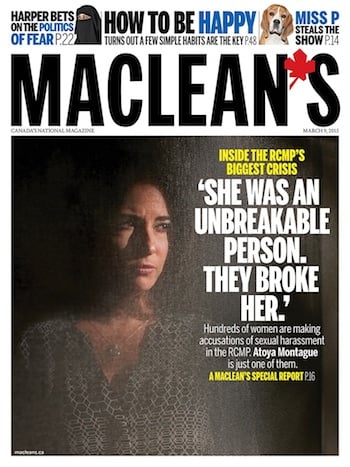 Yet the accusations keep coming.

In 2012, Galliford filed a lawsuit against the RCMP alleging “persistent and ongoing” sexual harassment and workplace intimidation.

Five women have followed Galliford’s example by filing sexual harassment lawsuits of their own.

And, later this spring, an Ontario lawyer will seek to certify a class action lawsuit against the RCMP on behalf of 380 female claimants, representing all 10 provinces. Maclean’s has several exclusive interviews with female complainants, like Atoya Montague, a civilian member from B.C. who alleges that in her 13 years with the RCMP, she was the repeated target of sexual harassment, bullying and discrimination.

Maclean’s speaks to a female Mountie whose harassment complaint was deemed unfounded by the force, after she complained she was sexually assaulted by a male superior.

And Maclean’s speaks to RCMP psychiatrist Greg Passey who calls the RCMP a “totally dysfunctional organization.”

Passey, who spent 22 years in the military and served in Rwanda, has never publicly criticized the RCMP before. But he’s lost his patience, saying he cannot stay quiet any longer. “I’m very frustrated. It’s like I’m walking up to my nose in s–t,” he says. “If you come forward, they label you a troublemaker. They do everything they can to make you go away, and the supervising officers doing the harassing get promoted. Are you kidding me? What kind of organization does that?”

Find this story in our digital editions and on Next Issue Wednesday night. The print edition hits stands Thursday. We’ll publish the story on the site later this week.